Water Heaters
Pool and Spa Service
Lawn Irrigation
Licensing
Bonded
Insured
All statements concerning insurance, licenses, and bonds are informational only, and are self-reported. Since insurance, licenses and bonds can expire and can be cancelled, homeowners should always check such information for themselves. To find more licensing information for your state, visit our Find Licensing Requirements page.
Business Details 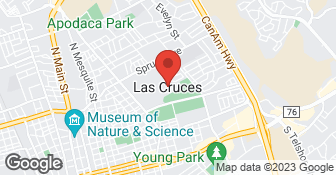 English & Spanish. A leading mechanical company in Las Cruces, Air Mechanical focuses on providing optimum quality in various HVAC & plumbing services for everyone in Dona Ana County as well as the surrounding areas. As the company owner, Paul Darley, I have over 23 years of experience in the industry. Thus, you can rest assured that no matter what project we handle, we will be giving nothing but highly professional and expert work. Our gallery of photos from previous projects can attest to the amount of time and effort that we put into the services we provide. Of course, while we strive to provide the most beautiful designs and diligent outcomes, we understand that price is one of the most important deciding factors for clients. That is why we offer the fairest prices for our best quality work. Call today for your free estimate!

Email george.chrzanowski@gmail.com for more info! We are a full service contractor, have been in business for 25 years, and are GB/98 licensed. Our primary services include Roofing, Concrete, and Stucco, but can provide all services for your Remodeling Project. No down payment required to start a project. Regardless the size of the job, the minimum charge is $650 for travel and set-up (travel fee does not apply to local customers and only for those that live more than 60 miles out). A one time offer of 10% off at Lowes will be extended for talking to George about your real estate needs. For quickest results, please email: george.chrzanowski@gmail.com.

Professional, Friendly, Courteous, and explained what they were doing and why.

The scale deposits that was supposed to dissapear  within  3 weeks in the shower. toilets, sinks, dishwashers, etc, never happened.  Had to replace many toilet flush valves and sink parts, continue using special dishwasher lemonshine to get rid of etching on dishes and glassware. We continued to make service calls to Clint Snow, Service Mgr., went ignored.  The last and final  call was 9:30 AM on ...

DESCRIPTION OF WORK
Provider sold us the best  Freije system they made, guaranted for five years.

DESCRIPTION OF WORK
Several years ago I had Horizon Mechinical install an Easy Water treatment system. At that time the service man also suggested a whole house filter. I agreed to that. The last service was to replace the filter. I was not able to do this myself.

He is very thorough, reasonably priced, and professional.  He is very honest.  Update 4/9/2012    I called them to service my Master Cool system, but they had no record of working with me previously. It was like working with a completely different company. The cost estimate was also extremely high.

DESCRIPTION OF WORK
He converted three of my properties over to heat.  He will be servicing evaporative air for me soon.

Horizon Mechanical demonstrated real professionalism. They came on time as scheduled (early in the promised window), and did the work quickly and efficiently. They also gave advice for the next steps in the preservation and restoration process, as we had suffered a great deal of water damage before we discovered that the pipes were broken. We were greatly relieved to have our water back!

DESCRIPTION OF WORK
Repaired two burst pipes in the outside wall of our back bedroom bath. Required removal of part of the drywall, and some soaked insulation, which were located behind the sink cabinet. They also replaced a damaged valve.