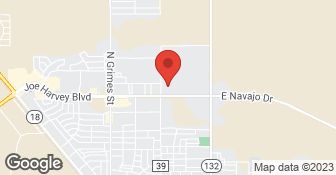 For over 18 years, we have been the area's leader of cooling and heating services, offering a wide range of sales, maintenance, repairs, and installations of many products. We understand the importance of being completely comfortable in your own home especially when living in a warmer climate. With the installation of a cooling or heating system from A-Tech, your home is guaranteed to be comfortable all year round. Offering same day service 7 days a week, you can always rely on our team to be there for all of your needs....

Description of Work
I called them about my outside AC unit not performing correctly, and they had a service tech out to my house the next day! It didn't take him long to find the problem , but he said that my unit was one of the few they didn't stock the necessary part for. It didn't take long for the part to arrive, but shipping costs were outrageous! I asked if the warranty covered these repairs and was told that it didn't. After contacting the unit manufacturer, it turns out the unit was covered. A-Tech was reluctant to refund part of my payment at first, but after the unit manufacturer got involved I was mailed a refund check.

The lady who answered the phone took my information and then informed me that I would need to pay $110 to get a QUOTE for a unit. This was the third business I had called to get a quote from (need 3 quotes for insurance) and none of the others I had contacted required a fee to give a quote on a unit. When I asked her if she was serious because that's outrageous for just a QUOTE, she got nasty about it and when I told her no thanks she promptly hung up on me. If this is the kind of service you like, then go for it, if not, there are plenty of other very good heating and air conditioning services to choose from.

Description of Work
I called to get a quote on a refrigerated air unit.

Heater quit working. Provider showed and replaced a part. The heater only worked for a few more hours before quitting. Provider showed up a few days later and said it needed new heat strips. Provider ordered the wrong ones and decided the whole unit had to be replaced. After the new unit came in, provider waited four full days before installing. When I got the bill, it was for $400 more than I was told it would be. Provider was rude and very unprofessional when I asked to see to the actual breakdown of the work performed and an itemized cost. Field provider told me to "take it up with the office." My wife went to the office and they were even more rude and unprofessional and would not tell her how the cost was all broken down until after she wrote them a check. The work done is done well. However, we felt like they were trying to milk every penny out of the job that they could and were always hiding something.

Rick was my contact with A-Tech. He came and checked my non-functioning, 1981 model A/C on May 30. The new unit was ordered and installed on June 5th. This was an American Standard unit, 4 ton. The technicians who installed the unit were professional, they left no mess, and were absolutely no problem. They came back the next day to finish up a few small details and I believe I now have a great system. I can't think of anything to complain about. Rick was fantastic, willing to sit down and explain the details and process and answer any concerns I had. They do not deal with the Home Warranty companies. But that was going to be an issue for me anyway. The person who answers their phone is not as pleasant to deal with as Rick was. I can overlook that and understand she probably deals with a lot of people. I will use their service in the future. Their prices seem competitive and they treated me well.

Tech came to our house and confirmed what I already suspected was wrong with the unit. After determining that the condenser fan had failed he asked me if I would like to order one and pay extra to have it shipped over-night. This was on a Thursday and if we did not get it the next day, I was looking at an entire weekend without air conditioning. I agreed to the surcharges with the understanding that the part would be installed on Friday. Then the Tech informed me of the service fee that I was not aware of, but he said that there would not be any additional service fee to come back and install the new fan. Donna from the office was supposed to determine that they could indeed get the fan over-night and call me with an estimate. After about an hour, I called her for the estimate. She told me that it was going to be another $493.00, including the shipping fee and the service call. When I told her what the tech told me I was informed that I was wrong and there would be another service charge. After, reluctantly agreeing to the additional charges, Donna assured me that she would call me (Friday) when the fan arrived to arrange the installation. She never called us on Friday. When we called her she simply told me that it had not arrived. When I asked how she knew that the fan had not arrived, she said she had already received her deliveries for the day. I asked her if she asked the people she ordered from if they would be able to get it to us overnight. She did not. I said that I should not be responsible for the shipping fees since I only agreed to them if we could get it overnight. She said that she would split the shipping with us. We used another company and the entire cost was less than $200.00. I would highly recommend that everyone avoid this company! They are not up-front about fees and cannot deliver what they promised.

Insured
All statements concerning insurance, licenses, and bonds are informational only, and are self-reported. Since insurance, licenses and bonds can expire and can be cancelled, homeowners should always check such information for themselves.To find more licensing information for your state, visit our Find Licensing Requirements page.
General Information
Free Estimates
No
Eco-Friendly Accreditations
No
Payment Options
Check, Visa, MasterCard, American Express, Discover, Financing Available
Emergency Service
Yes
Warranties
No

A-Tech Air Conditioning & Heating is currently rated 3.1 overall out of 5.

No, A-Tech Air Conditioning & Heating does not offer eco-friendly accreditations.

No, A-Tech Air Conditioning & Heating does not offer warranties.