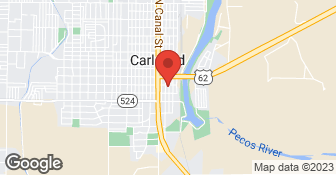 Description of Work
I used them on a move from Artesia. NM to Albuquerque, NM.

This owner busts his behind to get things done. They are great, will use them again.

Description of Work
Moved my belongings.

When I first contacted EZ Moving, I was somewhat concerned about the lack of responsiveness: Folks didn't call back when they said they would, for example. (All my initial dealings were by phone, from Texas.) But in the end, I was very pleased with their willingness and ability to help me load an unusual, and very heavy, object for a fair price. The three movers showed up about a half-hour later than scheduled, but they called to let me know what was happening and why. I had expected five movers, but they got the job done with three, and gave me a discount because there were fewer movers. Everyone I dealt with, either on the phone or in person, was very nice and quite professional. I especially appreciated the help of Everett and Diego.

At first it was hard to reach the manager or get a return phone call. I finally was able to reach the manager and he and I set a date and he gave me an estimate. I have a 5 bedroom, 2 bath home with two living rooms so I was expecting the quote to be high. The manager met me at the house so that we could go over inventory and I could let him know what was included and not included in the move. I let him know I was planning on packing up and moving the dishes in the kitchen. He quoted me about $950. A couple of days before Move Day, the manager confirmed the date and time that the company would arrive to move my household. They were running a bit late but called me ahead of time and let me know that they were gassing up and would be right over. When the truck arrived, 5 guys came to move my stuff. One man was in training and since the quote was for four guys, they did not charge me for the additional help. We did a quick run thorugh the house with all five men. The gentleman in charge also went over insurance with me. The men were very respectful, and very professional. I had my teenage daughter with me, and they were very respectful to her as well. The disassembled the beds and loaded everything up quickly. One man stayed in the truck to keep everything organized and the other four men worked nonstop to carry furniture and packed boxes. They checked with me frequently to make sure they were not loading up boxes or furniture that I needed to stay at the old house. It took around 2 hours to load up the truck and they took a brief 30 minute lunch break before meeting me at the new location. At the new house, they quickly unloaded furniture and boxes. They assembled all the beds and put each box where I asked them to. They unloaded a lot quicker than the loading process! They would not let me lift a sigle box, every time I reached for a box to put it away another man would come around the corner and take it out of my hands. After we did a quick check to make sure everything was out of the truck, the gentleman in charge went over the bill with me. He had the labor, mileage, and insurance itemized and explained what the charges were before I signed it. I am very pleased with the services offered through EZ Moving and would recommend them to everyone. A follow up call by the manager made me feel like they really appreciated my business and cared about professionalism.

Description of Work
EZ moving moved my household from one location to another location in Carlsbad, NM. All of my boxes were packed. Price was for 4 men to move my furniture and boxes from the North end of Carlsbad to outside of Carlsbad on the South part of town.

They are a local company, and I thought they did a fine job.

MOVING AMERICA ONE HOME AT A TIME. "Most people are under the impression that moving brokers are limited, not transparent and provide no assurance for their relocation which is understandable considering the quality of moving brokers that are in the industry". What separates us is the fact that we care about the moving process enough to implement quality control in every aspect of our operation to help prevent the ball from being dropped. The Moving Coordinator sets up your estimate and goes through your inventory in detail, packing, valuation coverage, all included services, and potential additional services so you don't ever have to worry about hidden fees. Verification confirms all of the information on your contract provided by your Moving Coordinator including scheduled dates, COI's, addresses, services, packing, forms of payment, and what to expect. That will be followed up with being followed by a verification complete email. Quality Assurance is your security for accurate inventories. If your furniture isn't a standard size and you are worried about cubic footage increases, truck space, your adding and removing items, or believe items need special handling that will be taken care of with a scheduled call. The job of Q.A is to either video chat, request pictures, and finalize your inventory to industry standards. Customer Service provides essential information to our customers and is equipped to answer all questions from the more frequent to the most difficult. They are also trained to solve most issues within a few calls. All documentation that needs to be prepared and signed is handled through them. They will properly transition you from our care to one of our network of movers while making you feel like the expert in the industry. Finally, through the transparency we provide to our clients and customers we are able to make sure that there is always a smooth transition.  …

E-Z Moving & Storage is currently rated 4.8 overall out of 5.

No, E-Z Moving & Storage does not offer eco-friendly accreditations.

No, E-Z Moving & Storage does not offer a senior discount.

No, E-Z Moving & Storage does not offer warranties.