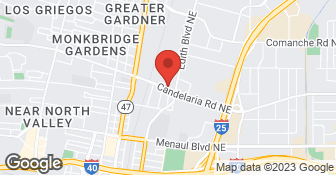 In business for 30 years. The first 15 years we contracted exclusively for Sandia National Laboratories and Kirtland Air Force base. The Last 15 Years we have shifted into Commercial and residential service and repair. Our construction division works with general contractors. Our last project was for the state of New Mexico Museum of Natural History Electrical on the project $201,000.00 We work with fixing a switch in a home or large construction projects....

Whether you’ve heard about our fantastic service from a friend or noticed our trucks around Albuquerque, we’re happy you’re here to explore what TLC Plumbing can do for you. A company built on core values of honesty, hard work, respect, compassion, and consistency, TLC Plumbing is dedicated to consistent excellence when it comes to servicing your home or business needs. Locally owned & operated. Additional contact - Tracy Johnson. Additional DBAs - TLC Plumbing & Heating Cooling, TLC Plumbing & Utility. With Service in Albuquerque and Santa Fe, our Santa Fe office is located at: 2532 Camino Entrada, Santa Fe, NM 87507 Phone number - (505) 471-6400.  …

At Armijo and sons we do a large variety or electrical work to help homeowners or small business owners find a affordable solution for there electrical needs. We do work such as: Panel Upgrades or Replacement Lighting & Remodels Energy Analysts RV/Welder/Hot tub plugs Electric Car Chargers  …

I found them in the phonebook. I just called them and they came out and gave me an estimate. They did the work and there wasn't a problem. I have no complains, so they are very professional. I called around to a few places and they are right there with everybody else. The price was fair. They were probably a little bit cheaper than most places. There was this one place that was cheaper that I recalled, but they were late to show up for the estimate. I didn't want to go with them, so I went with National instead.

Description of Work
National Electrical Contractors did a service update.

It was very easy. We called NEC, they came out when they said, they gave us their bid, we negotiated price and they accepted. All work indicated on the contracts was performed and they even did a few extra inspections and fixed (for free) a bad connection on our electric water heater. The relocated well electric service worked from the moment it was completed. The solar system is working beautifully and generates enough power that it has become very clear it will pay for itself over time as promised.

Description of Work
We wanted to have a 2kW solar system installed on our residence and have the electric service for a well moved off the garage to its own pole on another house we owned. NEC first gave us bids and we were able to arrive at a fair price pretty easily. We then gave them the solar system deposit. Prior to installing the solar system they installed the new electric service at the property with the well ($2800). They told me when it was going to be installed, called the utilities since trenching was required, pulled all permits, filled in the trench after running the lines, and coordinated all efforts with the local utility to make sure everything was approved. The solar system project ($11,200) installation was very detailed and required extensive coordination with both the utility and local planning department. NEC coordinated all permit requests with all necessary entities which seemed to go off without a hitch. They came out when they said they would and performed all work necessary for install the solar panels and work with the solar panels and microinverter manufacturers. The panels were installed, all electric wiring done and all approvals were given. NEC explained to us how the system worked and how we could track our solar generation online.

EMERGENCY SERVICE for residential and commercial . Parking lot lighting, lamp and ballast replacement. Full service electrical contractor call us for a free consultation on your problems