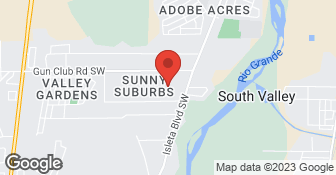 Satisfying Homeowners of Santa Fe and Albuquerque for 35+ Years, Critter Control provides humane & safe animal removal and prevention for animals like skunks, raccoons, rodents, bats, pigeons and pocket gophers. ***We do not service for bed bugs or termites. *100% Free inspections offered in Albuquerque, Belen, Bernalillo, Casa Blanca, Corrales, Grants, Los Lunas, Milan, Moriarty, Peralta, Placitas, Pueblo Of Acoma, Rio Rancho, Santo, Domingo Pueblo, Tome and more! Contact Us to Schedule.* We can locate an animal's entry points and seal/repair openings to prevent access to ceiling, walls and living areas of your home or business. We clean droppings/urine to avoid diseases like hantavirus/plaque. In addition, we provide preventative services to control exterior populations and keep critters from entering your home. Control Critter also provides general pest control service. We use low impact, natural materials to form a barrier on the exterior of your property. We inspect and monitor on a routine basis to control general pests like ants, roaches, centipedes, spiders and other crawling insects.  …

We are a fully equipped pest control company offering the finest organic pest control products as well as a full line of standard products to meet all your pest control needs. We offer the iBugGuy Organic guarantee; we will deal with your problem until we reach a solution. No questions asked. We want to provide a safe environment in your surroundings for generations to come.  …

I spent a fortune with this company last Summer, followed all of David's advice, let him treat every single ant hill in my yard, treat the inside/outside perimeter of my house several times, AND bought ridiculously expensive mouse traps from him. He wanted to have a regular monthly schedule and charge $90.00 a month for his service (AFTER the $500.00 already spent over a period of a few months). I told him I would call him when I needed another treatment, but couldn't have him come every month. I ended up having to move out of my house for a few months so that a serious roof repair could be made. When I returned to my house, I had the landscaper remove a strip of grass next to the one side of the house where I had paid this guy to treat several times. Last year when he was robbing me blind, I asked if removing the grass would matter and he told me "no." Have not had ONE ant come through in that area of my house since that grass was removed this Spring!! Nevertheless ants are an issue in my area (but not $90 a month worth), and I noticed that a few were coming through in two small areas in my pantry. I called and scheduled an appointment for this week.....his wife scheduled the appointment and told me he would be here. He called me this evening and told me (without even looking at my house!!) that I probably have an infestation and it would cost more money than the last time he was here. I've been back in my house for a few months and haven't had a problem, so there isn't an infestation and I simply could not afford to have him come to my house every month, nor did I see why I should have to....none of my neighbors do that. He cancelled my appointment and told me that he wouldn't come out just to treat the one area. He told me that most people have more ants than they think and he would have to treat the whole yard. I told him I could treat any ant hills in the yard which, by the way, I paid a fortune for him to get rid of last Summer.....by pouring soda in the ant hills like my neighbors do. He explained to me (like I'm stupid) that it wouldn't kill the "Queen Ant" if I use soda...would only kill the worker ants (I couldn't believe my ears) Bottom line, he wants to come out here every month whether it is necessary or not. This guy is a ripoff, and made me feel worse than ANY ripoff mechanic that has EVER worked on my car. He did me a favor in the long run. I just went to Angie's List to find another pest control company. What this guy did is wrong, unethical, and unprofessional. He should be ashamed of himself.

Description of Work
David of Dynamite Exterminating treated my house for ants and setup mouse traps.

I WAS SATISFIED WITH THE SPRAY THIS COMPANY USED TO KEEP MY ANT PROBLEM AWAY. IT ONLY TOOK THEM AN HOUR TO FINISH SPRAYING MY HOME ON EACH VISIT. THE SPRAY DID NOT MAKE ME SICK, AND IT WORKED WELL.

Description of Work
I HAD MY HOME SPRAYED FOR BUGS FOUR TIMES.

no wood-destroying insects and or organisms. I.E. termites woodboring beetles,etc.