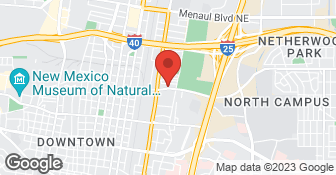 We are a family based remodeling company making your dream home a possibility is our mission. On a budget no problem we can help. Feel free to contact us for a free estimate.

This guy would always promised he was coming would never show up would show up at 2:30 in the afternoon and leave at 5 always on his cell phone never focused on the job very poor quality of work never finished the work and ran off with all our money refuse to answer texts and finish this job took our $8,000 and ran

Description of Work
hired to do demolition on a deck and rebuild another paid $8,000 ran off with the money never finished the work shoddy work at Best total con job. Will be suing him in small claims

Ansel Suddeth the owner of Ansel's Remodeling was referred to me by a friend. She spoke very highly of him so we asked him to come hang a light. He was very responsive, showed up when he said he would. He even came on a Sunday morning. We were impressed. While hanging the light he dropped one of the glass globes. We understand that things happen so we did not get upset, we figured we could order a new one. After Ansel hung the light partially we decided it was too small and told ansel to leave it up for now but we would be ordering a new one. We still paid him $75. At the time he was at our house we asked him if he could repair some drywall on the patio. He gave us a detailed description of what he would do and what the cost would be. He called us numerous times to see if he could do the drywall work. We decided to hire him. He came on a friday and did part of the work. The next morning he was to return and finish the job. He asked us to leave him a check since he would be finishing that day. We had no reason to believe he would not finish and do a good job. When my husband came home that day, the job was not finished and Ansel had taken the check. Over the next week my husband called and text Ansel to find out when he would be back. He first said he had the flu and then Pneumonia. We were patient because we believed him. Ansel came back on the following Friday to finish. When we got home we were so disappointed. There was paint all over the driveway and the mailbox and the plants. He obviously spilled the paint. The job he did on the patio ceiling was terrible. He did not do it properly and he only painted the section he repaired. When we hired him he said he was going to paint the whole patio ceiling. If he had not included that in his proposal we would not have paid $370 for a 3x3 section of drywall. We called him back and he said he was at the store getting something to remove the spilled paint and he would be back. He never came back. At that point I made a complaint with the BBB. Through texting he said he would come back the next day and clean up the paint and fix the ceiling. My husband spoke with him on the phone as well. Late that evening I received 3 text from Ansel telling me to not be disrespectful to him and he is not my servant. It was so strange and mind boggling because he was putting blame on us and we had not done anything. It was very bazaar behavior. I explained to him I have never been disrespectful or said anything disrespectful to him and all I wanted him to do is fix the job and clean up the paint. He continued to text me about respecting him. He was supposed to show up for the 3rd time to finish, fix and clean up the job. He never came. I text him again and told him he was unprofessional and a liar. I did not get a response back. Ansel is very responsive to get the job but then once he starts he is flakey, unprofessional and does not communicate. His work is terrible. I wish I could post pictures. It is almost comical. Not only is his work bad, I felt very uncomfortable with him coming to my house and frankly unsafe. The way he text me and the things he said were very aggressive and intimidating. I would never recommend Ansel and I for sure would not recommend him. He is a charmer at first but then he turns into a very unprofessional contractor.

Description of Work
Hung a light fixture and repaired drywall

Welcome to B.W. Earp, Inc. B.W. Earp, Inc. is a stucco contractor serving Albuquerque, NM. Since 1990, B.W. Earp, Inc. has been at the forefront of contemporary surfacing. This unique contracting company combines the timeless quality of handworked stucco and the contemporary usage of highly crafted interior plasters to bring the customer a specialized surface that is custom-designed and looks great! The specialized techniques used by each contractor require the combined skills of structural integrity, architectural design, rigorous craftsmanship, and an eye for beauty. Since 1990, residents and businesses in the Albuquerque area have turned to B.W. Earp, Inc. for a variety of stucco services, including waterproofing and bonding. Their expert staff is always there to help you decide the right surfacing option to match your building construction. Their hard work and expertise have led them to become an industry leader and the most respected name in resurfacing and waterproofing. Our company provides the following services - Stucco, synthetic, and El Rey - Venetian plaster & variance finishes - Re-stucco - New construction -Parapet Repair and Waterproofing B.W. Earp, Inc. is New Mexico's most experienced and creative resource for exterior stucco and interior plaster surfaces. Visit our website to see what we have to offer! We are proud to be licensed, bonded, and insured. Visit bwearp.com to see the work we've completed. Call us today! We invite you to ask for an on-site estimate. 505-344-2111 ***If you live outside the Albuquerque area there is a $50.00 fee for an estimate. This charge will be credited toward the project once our contract is signed. Thank you for understanding.  …

Stucco is not just a word or a product to us. Stucco is something we enjoy. For many years we have taken great satisfaction stuccoing many homes in the Albuquerque and surrounding areas, making this town beautiful, making homes come alive with color and new texture. Just Stucco and Windows specializes in exterior and interior stucco and plaster, windows, doors, trim work, drywall finishing and painting. We do all types of masonry, block and stucco walls and courtyards, brick, flagstone and pavers, cultured stone, veneer and stacked stone. Just Stucco and Windows installs all types of windows and doors, i.e., vinyl, wood, fiberglass, custom built and energy efficient with high quality finish work. We believe in exceptional customer service, and our commitment to excellence is always foremost in each and every window installation job that we do. All of our jobs come with a 100% customer satisfaction guarantee. Cost is determined by the job. No travel charges. Ask about Angie's List discount. Award winning. Additional fax - (505) 452-.0895. Additional email - juststucco@gmail.com. Additional contact name - James Rooks  …

We have been in business for over 20 years. We offer Free estimates and have many available references. Chose us and you do not pay a penny until job is fully done to your satisfaction  …

Bonded
Insured
All statements concerning insurance, licenses, and bonds are informational only, and are self-reported. Since insurance, licenses and bonds can expire and can be cancelled, homeowners should always check such information for themselves.To find more licensing information for your state, visit our Find Licensing Requirements page.
General Information
Free Estimates
ask for details
Eco-Friendly Accreditations
No
Payment Options
Check, Visa, MasterCard, PayPal
Senior Discount
5%
Warranties
Ask for details

We install tile, stone , wood flooring, cabinets, and many other types . We specialize in custom no job is too big or small

How is ansel remodeling overall rated?

ansel remodeling is currently rated 1 overall out of 5.

What days are ansel remodeling open?

No, ansel remodeling does not offer free project estimates.

No, ansel remodeling does not offer eco-friendly accreditations.

No, ansel remodeling does not offer a senior discount.

Are warranties offered by ansel remodeling?

No, ansel remodeling does not offer warranties.

What services does ansel remodeling offer?

ansel remodeling offers the following services: We install tile, stone , wood flooring, cabinets, and many other types . We specialize in custom no job is too big or small