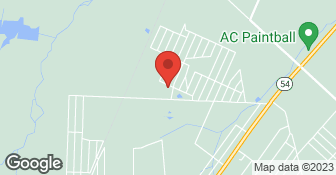 The work was started and was stopped halfway through. I didn't do my due diligence with American Craftsman. When we requested to have them come do the estimate, it was on the premise to provide an estimate for two bathrooms. I told the gentleman I only had roughly 10K to remodel both bathrooms. Instead of giving me an estimate for two bathrooms, he gave an estimate for one because he was only doing one bathroom at a time. He didn't explain the estimate or anything like that. I didn't pay attention because I scheduled to leave for Korea for two weeks. Once I caught the discrepancy it was already too late, so now I have one bathroom done and another one waiting to get remodeled. The remodeled bathroom consumed around 6.5K. I could have gone with another contractor who was willing to do both bathrooms for 7K. I went with American Craftsman because I thought they were giving me a quote for two bathrooms since that's what I requested. American Craftsman did an excellent job, but I completely feel like I was taken advantage of. I sent them a note and expressed my discontent with their business practices. I told them I didn't think there were companies out there taking advantage of veterans who protect their way of life. I saved money while I was on my deployment to Afghanistan, and my intent was to remodel my sister's bathrooms since she doesn't have the means to do it and she's expecting. Now I can't keep a promise I made because I had to pay for a very expensive lesson learned.

It went very well and the price was reasonable. It was a great experience and they were excellent craftsman. They were very professional and on time everyday. They cleaned up after themselves everyday after they were done, so I have no complaints. They were here until they completed the job. They were very pleasant and everything was superb.

I would highly recommend them. They were reasonable and it was a good product that they used. They do good work and they clean up. They are dependable.

Description of Work
I used the service of American Craftsman Contsruction about three weeks ago for hardwood floor and tiles.

The experience was good. They looked at the job and gave us quote. We haven't received the windows yet. Their responsiveness was fairly quick.

Description of Work
American Craftsman Construction gave us a quote for installing windows. The windows are on order and they are going to come out and install them as soon as it comes in.

I think that it went very well. They were all very courteous and professional. They're very experienced and know what and how to do it. The quality of their work is outstanding. They were always on time and worked efficiently. They cleaned up well.

Description of Work
They came to my house and installed wood floors, crown molding, and a tile back splash.

We are a general construction company focusing on meeting all your flooring needs and dreams.  …

Floor Coverings International proudly serves homes and businesses throughout South Jersey & Bucks County PA. We provide an innovative and efficient approach to designing, buying, and installing the flooring products that our clients rely upon. We stock a vast array of flooring in our warehouse as well. We are a full service "one-stop" company. We will provide and install your flooring. We do not install materials purchased elsewhere because when you purchase from us, we not only back the manufacturers warranty, but we guarantee our installation! We do not offer repair services.  …

American Craftsman Construction is currently rated 4.5 overall out of 5.

No, American Craftsman Construction does not offer eco-friendly accreditations.

No, American Craftsman Construction does not offer a senior discount.