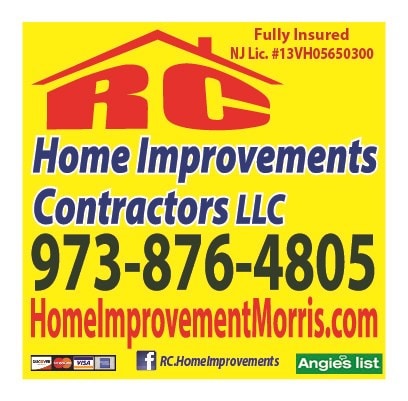 I’ve been using Richard and RC Home Improvements for a long time. I highly recommend them. They do excellent work, finish on time, and Richard is very trustworthy and responsive. I’ve recommended them to family and friends as well.

RC Home Improvements Contractors has done multiple renovations for me over the years. They offer complete contracting services from the beginning to the end of project. They have always been prompt professionals that take great pride in their work. They explain what has to be done, and complete the work in a timely manner. Their pricing of a project is affordable with no surprises. I highly recommend them for their services.

Very well. The only one of 3 recommended Angie's List contractors who returned my phone call. He came out on the weekend of the week I called. Assessed the situation. Gave me a quote and told me to call him in 2 weeks to schedule the work. Sure enough he committed to coming out on the weekend to do the job. He and his crew worked carefully, diligently and did a terrific job. Couldn't be happier. Would highly recommend RC and plan to use them again for future projects.

RC Home Improvement did great work and were very affordable!

They did very nice work. Rich explained everything he was going to do.

Description of Work
Finished my basement

Contractor never contacted me. I found another contractor through google.

Excellent- punctual, flexible in adding work like windows. Superb tiling work and painting and the overall job went very smooth and adaptable to changes to be made. Left the property very clean after every day of work. Highly recommend and and extremely precise in taking notes on everything what needed to be done. Very competitive pricing and adding additional work no issue and and very fair in the cost and will add some work as a favor. Will call them again

The job went well. We had some scheduling issues but otherwise all went well.

Description of Work
Installation of Tile Flooring 500sqft (labor only)

Very professional and high quality work. Would definitely use again.

The contractor did not do a quality job and the carpet was ripped. He did not ask me about doing that before replacing the doors. I also reached out to him

We never ripped the carpet.In one of the closets whoever install the carpet didn't remove the bottom track of old sliding glass door before to install the carpet. We can't install bifold doors with metal track on the bottom. We had to remove the old track to install two new 24" BIFOLD doors in each 48" opening's closet.Total four 24" bifold doors for two closets. You paid 8 hours for labor work only, I had to buy four 24" bifold doors with my credit card and you didn't reimburse the money $254.48 Always we take pictures before, during and after the project. You inspected the job before we left

I will hire them again. They did a great job.

Description of Work
I needed a basement renovation. They installed drywall and tile.

Richard turned out to be a very honorable businessman. We had some disagreements in the beginning, but we were finally able to resolve our issues.

Richard and his team were great to work with and did a beautiful job renovating our basement. They showed up on time and were highly professional. They cleaned up after themselves and put mats on the floor on their way to the basement to keep the floors clean. I would highly recommend this team and will use them again for future renovations.

From the onset after purchasing the deal I had to repeatedly email and call the owner to set up a consultation which was part of the package. They sent a guy over who "strongly suggested" an expensive ($850) unnecessary add on because they thought that installing sheetrock to a space with dormers would be a pain in the neck. The owner followed up & also tried to push the add on & when I declined it was like I did not exist anymore. I guess the deal was to get you to commit and they believed that they could persuade you to add on pricier add ons. I had to follow up several times to confirm their start date of 10/13 which they originally gave me to find out that it was pushed out to 10/14. They never answered my repeated calls regarding coordinating rubbish removal for the job (I ultimately paid another company $200 to remove the rubbish), nor did they return calls for job specific questions. The project manager Dan was extremely professional, knowledgeable and skilled while the other guy he was teamed up with was a bathroom tile guy who knew nothing about sheetrock. Dan was a great communicator & did a great job within the 40 hour time constraint and because of him and his efforts I am not going to escalate my awful shakedown experience with RC HI any further with Angie's List. 2 weeks after the job was done the owner had the nerve to call me (finally) to inquire about the job,-I guess he wanted to know what type of review I would post. He gave me flimsy excuse as to why he did not return calls and said that they do not remove garbage since they didn't have a truck to do so but I had already made inquiries and found that NOT to be the case. Too little too late. Not all customers are dim RCHI! I would NEVER EVER USE THIS COMPANY AGAIN NOR WOULD I EVER RECOMMEND THEM. Turns out, Dan was a new freelancer and chances are he would not be assigned to you if you chanced it and used this company. I have used Angie's List countless times and have never had a bad experience until now.

We never heard back from this company despite sending e-mail with our contact information and after another week CALLD and left VM on their phone. A week later, no answer.

Description of Work
We sent an email detailing what work needed to be done on a bathroom as instructed by their site. Waited one week, no response. Left them our e-mail address and phone number. Called and left a voice mail on their phone number provided. One week later no response. I guess not interested in obtaining more work.

The quality was high. They answered all my questions clearly. They offered information where they thought I hadn't asked the question exactly right. I though he was good.

Description of Work
They did the kitchen design consultation.

Great, I couldn't be happier! All of the men were professional, friendly and very nice and quick!

Description of Work
Installation of a stove exhaust hood / changing outlets and wiring, repairing walls and painting ceiling and wall

Not well, first order was misread resulting in vendor going to wrong home in the wrong town. We spoke on the (vendor & me) issue and agreed to him... Sending sample pics and appt follow up. That never happened either.

Excellent service. Very honest and quality work. I'd be happy to use them for more services in the future. Fair prices too!

Richard was an absolute pleasure to work with. He repaired the wet wall and put back the tiles that fell out. He took his time. His work was clean. The wall looks like new.

Description of Work
Repair Tiles that fell out of Bathroom Tub/Shower.

Job went well and we are very satisfied. Price was very competitive. In this case, we (homeowner) purchased/supplied the tile and prepared the wall to save on cost. Tile installer arrived with all materials and tools. He was professional and skilled. Tile installation was very good and clean. This is an old house so walls not even and square but the installer managed to work around all the issues and we have a terrific looking tile backsplash.