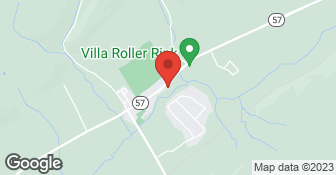 All types of asphalt and matenance work done for your home and business from new installation to repairs and upgrades. 3rd generation family business so you get a life time of nollage and experience. We do driveways,parking lots,patching,seal laying and landscapes...

Horrible, Job was done at the end of April, Looked OK, The first rain at the beginning of May revealed that my driveway was not draining water at all, in fact, there were huge puddles 1.5 inches deep covering most of the surface . I sent pictures to the owners daughter whom sold me on their services and that's when the stalling began, Text after Text , Picture after picture month after month. Every time I inquired when is this going to be fixed her replay was " What's the job address" Hopefully not knowing who's complaining isn't a sign of an overwhelming amount of complaints. Eventually after 4 months of complaining and being ignored, they came while I was out of town to FIX THE THE PROBLEM THEY CREATED ON MY DRIVEWAY. Apparently while in the process, they went to my next door neighbor and managed to sell him a new driveway. They took the material from my driveway, made themselves a quick $$$$ and disappeared. I come home to find a about 75 % of my driveway has a thin layer of blacktop on it. I have sticky tar running along the side of a ridge they left ( because they apparently ran out of asphalt due to the quick money they made next door ) and tar footprints on a brand new walk I installed for 6K just before they came. As for the ridge they left, it is now crumbling along the edge which I have to sweep up every weekend, BUT ITS CREATING EVEN MORE STANDING WATER IN PLACES I DIDN'T HAVE WATER BEFORE THEY ARRIVED. The owner of the company stopped by my house to discuss his unprofessional and shabby work. He made an outrageous attempt at blaming the problem on the driveway itself. "Stating that the driveway is level". Mind you, this is the same company and owner that advertises they've been doing this for 40 years. When I pointed out that I drive interstate highways and local roads that are level every day and the water drains because they put a crown in the middle which slops to the sides. EVERYONE I SPEAK WITH KNOWS THAT IS PAVING 101, I WAS AMAZED THAT HE WOULD ACTUALLY ATTEMPT THAT AS A REASON FOR HIS SHOTTY WORK GIVEN HIS 40 YEARS OF EXPERIENCE. That absurd suggestion ended quickly. I then pointed out the one inch high ridge that never existed before which is there because they ran out of material and never came back, he blamed his unnamed foreman assigned to the job. Once again, absurd. Remember His Family company has been doing this for 40 Years !!! So now that he has seen his company's shabby work get turned into absolute S##T. He supposed to come back and fix the S##T work they left at my home. But NO, Weeks go by and not a word, I'm getting anxious now that its December and the temperature has fallen below freezing. during my continuous communications with this company, I stressed this lake of standing water you left will become dangerous when the temp falls below freezing. WELL GUESS WHAT. I walk out to my car early in the morning and slip on clear ice that accumulated at the bottom of one of the large puddles left by New Jersey Asphalt LLC, Washinton NJ. Lucky for them I didn't hit the ground given the numerous pictures and communication encouraging them to fix this and avoid a scenario like this. I have no control over the mail man, amazon, ups, fedex etc. marching across my driveway while I'm not home and seriously injuring themselves on Ice that forms on my driveway because of their complete incompetence or willful negligence. Since they now stalled from April to December, their latest excuse was, We'll do it next week when its warmer. Well were currently in next week and its actually colder. I gave them 3 options full refund OR , Completely tear it up and repave it like a professional company would, OR face a lawsuit from me and anyone that may get injured because of your company. I've run out of options, patients and time with this company. If you see them pop up asking to quote a job or sell you a driveway because they're next door, avoid at all costs. Stay tuned, I'll update as this unfolds.

This man’s main focus is to ruin my good name . He fails to say how we spoke more than a few times and he also fails to mention the fact that I went over his driveway free of charge . He’s not reasonable or honest about the truth of his job or issues and I’m more sorry than he is for taking on his job.
5.0

They did a great job. I was 100% satisfied. I would recommend them. They were on time, did the work whole day, and completed the job. I would hire them again in the future.

Description of Work
Installed and remove the driveway.

We are a third generation family-owned business with over 35 years of experience. We can transform your home's curb appeal with a fresh asphalt or paver driveway, along with any other masonry work you may need. Our goal is to provide the highest quality service and provide the best experience for you along the way.  …

Suburban Asphalt is the most suitable Sealcoating Company in Sussex County. If asphalt is not properly seal coated or not sealed at all, cracks will begin to appear and slowly lead to potholes. With the proper and timely application, regular seal coating, hand-in-hand crack fillings, and asphalt repair, you can elevate the life of your pavement with a great difference.  …

How is NJASPHALTSERVICES LLC overall rated?

NJASPHALTSERVICES LLC is currently rated 3 overall out of 5.

What days are NJASPHALTSERVICES LLC open?

Are warranties offered by NJASPHALTSERVICES LLC?

No, NJASPHALTSERVICES LLC does not offer warranties.

What services does NJASPHALTSERVICES LLC offer?