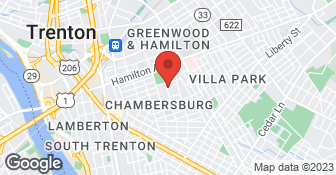 With over 23 years of experience in the Roofing Industry, we provide workmanship for the domestic and commercial markets. Look no further! ...

Five Star Roof Cleaning has ten years of full-time experience and the owner is on-site in the provision of all services, including estimates and jobs. We do not subcontract. Free written estimates are provided, usually within a day or two of a request for estimate. We normally can provide roof cleaning services within two weeks of the estimate. No deposit is required. Five Star Roof Cleaning is fully insured. Five Star Roof Cleaning utilizes best practices to ensure safety of your home and our employees. Special boots provide better gripping on stained, slippery shingles. We use strong, fiberglass ladders with extensions that do not touch your gutters. And we never use bleach, which can be harmful to humans as well as your plant life, and shingles.  …

From new roofs to repairs we are your # 1 choice. Specializing in many facets of the roofing trade, our highly skilled and trained staff of certified technicians are on standby, ready to take on the next project. Our estimates are free and we offer a free multi point roof inspection so why wait? Call today to schedule your free appointment.  …

JGHumphreys Llc - General Contractor will always be steadfastly dedicated to the highest level of ethics and craftsmanship, as well as honest, reliable service from knowledgeable and courteous professionals. It is my intention to use this company to provide both high end and value minded remodeling services at a modest profit to the benefit of those who share the communities I live in. It is my commitment to keep overhead costs low in order to offer exceptionally high quality craftsmanship at rates far below those of larger firms offering the same level of service. This means that on larger projects I often take only one at a time, and stay at that job full time until it is finished, focusing on flexibility if any design changes occur during the construction process. Services not offered by us are available through our network of professionally associated contractors  …

they did a great job overall. cleaned up nicely. the salesman Greg was very friendly and easy to work with. i would recommend them.

Description of Work
replaced my roof

Description of Work
put on a new roof, took off the old one, cleaned up everything. They were a pleasure to deal with

Description of Work
New roof and 2 skylights. Anthony and his crew are professionals. They couldn't do eneough to make you a happy customer!A+ all the way!

It went very well,I was very pleased with their services.

Description of Work
The provider installed a new roof.

We were very happy with the service. The estimate was explained in detail to us. When we heard all that they would be doing and the quality of the materials, we thought they were going to be expensive, but they turned out to have the lowest price as well. They came in punctually, set up tarps, and were cleaned up and done by mid afternoon. The new roof looks great. We have recommended them to others. Good people to deal with!

I thought they were excellent. I am using them again in the near future. They came at 7am and were gone by 3pm. I have referred them to others. They do quallity work, and use quality materials. They were punctual, and professional.

Description of Work
They redid my entire roof. They removed a slate roof and installed a shingle roof.

I liked everything about them. They were professional, good and they were fast. They didn't upset me for the house for a long time. Which I think is incredible.

Description of Work
A Damiano Roofing replaced my roof.

►Great Deal. We had called other places over the course of 3-months,... some never returned our calls, others were no shows and, a few gave us a quote only, to "modify" the price later because, it involved more work than initially realized. A.Damiano gave us a quote on the spot and said, they could get it done today. For that,... I give them the best rating available.

Description of Work
►Cross checked Roofers from Angies List and BBB,... both provided high marks for A.Damiano's Roofing. ►We had issues where, squirrels and birds had gnawed holes into our siding, soffit and fascia. This allowed the critters to burrow into the attic, set up house and, scurry about eating insulation and leaving droppings everywhere. It also freaked out the kids at night because, they though the animals would scratch their way into their bedrooms. ►We call to make an appointment for a quote. The repairman arrive promptly about 15mins before the scheduled time. It took me about 5-minutes to explain the situation and what, "I" thought needed to be done. He made a few recommendations and, I received a call from dispatch almost immediately after our conversation. -I was told,... the repairman could fix it today if I wanted it.

My communications went very well with them, and it was difficult to tell them that I had gone with another contractor (a family member of mine).

Description of Work
The company provided a quote to replace my roof and was very competitive in meeting and beating the price other contractors were giving. They were very courteous and prompt in responding.

People came out. They checked with me. They were very honest in comparison to estimates I had heard from other people. They gave me what I thought was a fair price. Other people tried to give me estimates of $6000 or $11000. I thought A. Damiano gave me a very fair price. They were there before they were supposed to be, like 15 to 20 mins ahead of schedule. They did what they said they were going to do. They cleaned up everything. Out they went, it was like clockwork, it was excellent. They gave me what I asked for. Everything was fine. I just couldn't say enough. I would surely use them in the future.

Description of Work
I used the services of A. Damiano Roofing for a new replacement roof. He supposedly gave me a great price and it was approximately $3400. The last time I used his services was on 8th of March 2011.

Thank you so much for your review! It was great doing business with you!