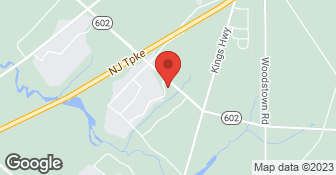 A&J Custom Home Remodeling is a fully insured company that has been in business since 1998. A&J Custom Home Remodeling has a showroom located at 1342 Kings Highway displaying cabinets, countertops and flooring displays to help our customers choose the products that they want. We are your one stop construction company who manages the project completely. All carpentry work is done by A&J employees who have over 25 years in carpentry experience. We offer the best sub-contractors to help complete the mechanicals of your project....

It went horribly. I called Mike (owner) after seeing numerous signs posted on lawns throughout the neighborhood advertising for "hail damage". Upon inquiry, I was informed that there had been a hail storm earlier in the year, and that he would contact my insurance company to facilitate any needed repairs. As a result, I hired Mike (owner) to remove existing siding and windows, and install new siding and windows in my rental property. After only the first few days, my tenants contacted me to inform that Mike did not show up as scheduled. Several days later, the tenants called me again to inform that a crew of two (who could not speak English) showed up to remove the siding. The individuals came and went, off and on, until the siding was removed. They never called to inform when/if they were coming or not. They just showed up whenever. The house was left exposed for over a week and the existing front window began to leak during a heavy rain. When my tenant called Mike, he informed them that the house and the leaking window were not constructed or installed properly. My tenant explained that the window had not leaked prior, and that the house and window should have been protected from the weather. After about a week, a single individual who again, could not speak English, showed up to begin installation of the siding. My tenant called me immediately to inform me that there was only one guy working and that the siding was not being installed properly. Specifically, that it was being nailed too tightly, flush against the house. They informed Mike, and he disagreed. I called Mike as well, and he disagreed with me also. I inspected the house and confirmed that the siding was nailed too tightly, and that the nails heads were in fact flush against the house, and that the siding did not "slide" slightly as it should. ANY VALID CONTRACTOR KNOWS THAT SIDING SHOULD NOT BE NAILED TIGHTLY TO A HOUSE. When I called Mike again, he agreed to take a look himself and assured me the siding would be installed properly. Within a week, they began to remove and install the windows, and had to remove the siding that they already installed to do so. AGAIN, ANY VALID CONTRACTOR KNOWS THAT THE WINDOWS SHOULD HAVE BEEN INSTALLED BEFORE THE SIDING. The next day, my tenants again called me to inform that the windows were not the correct size and that "guys who could not speak English" were trying to install them anyway. My tenants insisted that I had to come over and see for myself. I went over that evening and sure enough the windows were too small, crooked and looked a mess. The tenants also pointed out that the installers did not clean up after themselves and there was debris left all over the house. They were correct. There was also debris laying all around the yard and the inside of the house. The tenants have a small child and dog and were upset over the condition of the house. That leaving the debris posed a danger to their child. They were correct. Upon seeing the shoddy work, I immediately called Mike and fired him. I arranged to have the un-used materials shipped back to the supplier (Bradco Supply). Bradco did me a huge favor and picked up the material. They also gave credit to the account of A&J. Mike and I spoke and he promised to return $2,000 of the $5,400 deposit. I had to call Mike daily for a period of three weeks for my money and all he did was make excuses and delay the return of my money. I had two contractors (M.A.C and MCSquared) confirm that the siding was not properly installed and that the windows were too small. Both commented on the shoddy work that was performed and pointed out numerous other installation problems. I ended up hiring MCSquared to un-install the siding and windows and install them the properly. Obviously this cost additional monies and I have yet to be reimbursed by A&J as promised, and will pursue my legal options to recoup the monies. Mike accused me of stealing a window and flashing from him, when in fact, they were left at the work site and subsequently returned to him. Yet, he still refuses to refund the $2,000 as promised. As for Mike the owner, he is a storm chaser who rips off insurance companies and homeowners. He is unethical, a bold faced liar and a thief. Should you wish to receive input from any of the individuals or companies referenced above, I will be happy to arrange. Please note that my tenants have no vested interest in this situation.. One of them used to install siding and windows for a living and knew the work was not proper. UPDATE TO PRIOR POSTS. MIKE MCCONVILLE (OWNER) ALSO OPERATES UNDER T&M CONTRACTORS AND WAS CONVICTED OF THEFT BY ILLEGAL RETENTION IN GLOUCESTER COUNTY, NEW JERSEY. STAY AWAY FROM THIS GUY.

Description of Work
Siding and Windows.

The 2 woodworkig men, the glass person and his son, the painters and the first tile person I had were all were professional and excellent at their trade. April 2013, Kitchen and Master bathroom remodel began Now January 12, 2014 and continue to still have loose ends that I need to continue to call to make sure are taken care of. Staining touch up of kitchen cabinets (that had been restained due to being ordered in wrong color) and bathroom cabinets, bathroom fixture reinstall, tile grout touch up in bathroom and kitchen, paint touch up bathroom ceiling, o ring around toilet pipe. Issues during construction: |Wrong kitchen cabinets ordered, disaster trying to fix buy restaining, Wrong granite for bathroom,the disaster installing my bathroom skylight and needing to fix my roof! Took 3 doors to get a pocket door right. And we can't seem to get the plumbing fixtures right in my shower or my tub. Multiple leakes from the new bathroom plumbing causing pouring water from my kitchen ceiling and repairs made. And a brand newly installed garbage disposal fell out on Thanksgiving Eve! I could continue, but you would think I am just whinning, so you need to make your own mind.

Description of Work
A&J is the Home Remodeling Company, then they contract out to separate contractors.

A 2 month kitchen renovation turned into a 5 month project. Started out quickly, made some mistakes, took months to fix them, barely responsive to e-mails or phone calls. Quality of workmanship overall ok but not great.

They did a great job! They were pretty timely in getting the job done. They were a little slower in responding to questions, but the quality of the work and craftsmanship was very good.

Description of Work
They finished remodeling my basement and added a bathroom.

Kelly Home Services is a 3rd generation masonry restoration, painting and chimney service that values honesty and integrity. Quality workmanship at affordable pricing is what our customers receive. We do not use sub-contractors. All tasks are executed by seasoned professionals. The company's services include chimney repair, stucco, stucco remediation, brick & stone restoration, caulking, painting. Kelly Home Services is certified to perform chimney inspections and chimney cleaning. We use industry standard HEPA filter vacuums and rotary brush systems. This prevents creosote and toxic particulates from entering your home. We have completed hundreds of projects demonstrating a pleasant experience for our customers. Kelly Home Services delivers positive results with excellent service!  …

A&J Custom Home Remodeling is a complete home remodeling company who has an interior division specializing in basements, bathrooms, kitchens and additions. We also offer a complete exterior division who specializes in roofs, siding, windows and decks.

A&J Custom Home Remodeling is currently rated 3 overall out of 5.

No, A&J Custom Home Remodeling does not offer eco-friendly accreditations.

No, A&J Custom Home Remodeling does not offer a senior discount.