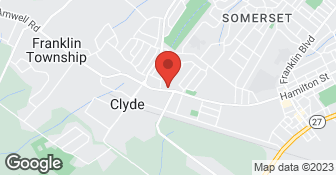 Generally, Alex is a great guy. He tries hard and his work is not bad. The issue with Alex is a few things. First, he can take a prolonged time to get work done. He began demo on our bathroom at end of January and completed work in July. Now, to be fair, we added about a month of delay because of inspections/permits, and cabinets. But, the cabinets sat in our garage for 2 months before he needed to install, so i doubt that was an issue. He apologized for it taking so long. Second, we had a reasonable amount of settling and we wanted him to level the floor. He knew that from the beginning, and one of his subs even commented when he saw the angle of the sub floor while he was planning out the plumbing. He really didn't level it, and there are parts that you can see are not level, especially by the closet in BR and near the window. Its not major, but visible. We worried about putting in the large cabinets and vanity, but he was able to pull out some magic and make them level and they don't look like they are on a non-level floor. All that being said, and the very large tile job (the entire bathroom is tiled, including a walk in 8X4 foot shower room, that Alex did a good job. Imperfections aside, and there were a few, Alex did a nice job and it definitely made the house more a wow factor for some later date when we sell it. Also, very nice job on most of the tiling. We separately purchased the tile, cabinets, plumbing fixtures (he picked them up for us to get the discount), toilet and sinks and quartz counter tops. He provided, in his cost, for the building materials required including sheet rock, wood, floorboard, etc. All in, our job cost over $44K. He had some parts of the floor (honed tile) that were not level to flat, and he tried to and quot;sandand quot; the tile down at the edge to allow for it. Not a great move, and we will likely have to have the top eventually resurfaced. Its not very obvious, but if you bend down and want to look, its visible. The variation in the floor is not that much in a majority of the room so that walking is uncomfortable - it is not. When you walk in and see it, with new cabinets, and glass enclosed shower area, it is really inspiring. He had limited help during the job since he underestimated time, and therefore expense. He had to do a majority of the work himself. But, true to his personality and character - he kept coming back to finish the job. We may not have been 100% happy, but we are not complaining. Alex was left alone in the house for a long time during the days, and he is VERY TRUSTWORTHY. A bit boisterous, but funny, and a good guy. He will always look to buy the materials for you, collect the money upfront and split the builders discount. Good idea to ensure he has some cash flow if he underestimates time. I received estimates from others (for whole job) and they were much higher - maybe rightfully so (who knows), but his references and price were good, so we went with him. My bedroom paint job came out well (also put up crown mouldings), and tear down and rebuild of walk in closet area (expanded) was fine. If i used Alex again, it would likely be for a less complex job. He seemed to get overwhelmed by this, but maybe it was from just the duration of it all. Alex is a good guy and you should absolutely consider his services.

Description of Work
remodel bathroom. Large room job, tile, and a shower room. Heated floors, Electrical, plumbing. Electrical and plumbing were sub'ed out. Also, did master BR painting, and new build out for a MBR walk in closet.

The start date that was given was accurate, there was no problems that Alex did not take care of. We kept to our budget, along with our completion date.

Description of Work
Alex and his crew remodeled every room in my house. The work performed by him and his crew was exceptional. The transformation of my house is amazing. From painting, to new floors, to a new kitchen, new bathooms,bedrooms and a new laundry room. He even went the extra mile to hang my window treatments for me. He also helped with suggestions to help decorate my house. My house is so beautiful and amazing as if it came out of a magazine. When Alex tells you, "it's not a problem!" he truly means it from the bottom of his heart. This is definitely the crew to hire to have your house remodeled, because I am completely satisfied with the job in which they completed in a timely manner.

Mel Canon LLC We install hardfloors, laminated floors, ceramic tile floors, bathroom tiles (floors and walls). We also repair and build decks. We do free estimates. Since we are a small company, I, Mel Canon, always personally operate every single project. I do not just send workers out by themselves to complete the job.  …

Alliance A1 Enterprises, a family owned and operated basement waterproofing business for over 3 decades!! Alliance A1 Enterprises provides waterproofing services in Middlesex County, Union county, and surrounding communities in the tri-state area. Waterproofing is achieved with the interior and exterior application of sealing products, combined with the installation of French drains, sump pumps with battery backups and exterior drainage. These solutions will give you peace of mind whether you're home or traveling! Alliance A1 Enterprises also provides basement and foundation repair, crawl space solutions, exterior drainage and masonry services. With free estimates and a lifetime warranty on our basement waterproofing services, you can rest easy knowing that your project will be handled with the utmost care. Please call us today for more information. In the case of an emergency, there’s no need to panic! We offer same-day service to ensure that your home is safe and secure.  …

All County is a family owned and operated company. All county does not sub-contract their work - in fact most of New Jersey's builders look to All County for their waterproofing and foundation needs. All County is New Jersey's #1 waterproofing, mold, and structural repair specialist. We offer special discounts for senior citizens, the men and women of our armed forces, as well as policemen, firemen, and teachers.  …

Bonded
Insured
All statements concerning insurance, licenses, and bonds are informational only, and are self-reported. Since insurance, licenses and bonds can expire and can be cancelled, homeowners should always check such information for themselves.To find more licensing information for your state, visit our Find Licensing Requirements page.
General Information
Free Estimates
Yes
Eco-Friendly Accreditations
No
Payment Options
Check
Senior Discount
No
Emergency Service
Yes
Warranties
Ask for details

See previous pages for all offers

Alex Folnagy Construction is currently rated 4.2 overall out of 5.

No, Alex Folnagy Construction does not offer eco-friendly accreditations.

No, Alex Folnagy Construction does not offer a senior discount.

No, Alex Folnagy Construction does not offer warranties.