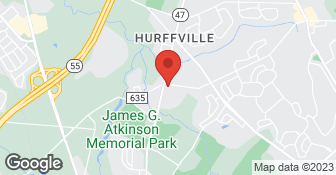 When I called, the female answering the phone was very casual. I wasn't even sure that I called the right telephone number. I made an appointment for an estimate, and I was told that the "arrival" time would be within a 4 hour window - between 4pm and 8pm. I was confused as to why I couldn't get a more exact time than a 4 hour window, and I was told that they had one man doing estimates and they didn't know when he would be done from the appointment before mine. I was planning on being home all day anyway, so I accepted the appointment. When the day arrived, I waited at home the entire time between 4pm and 8pm, and no one came. I went to bed at 9pm, and still no one had arrived. The next morning, around 9am, I opened my mailbox to get my mail and noticed someone from Advanced Air left a business card in my mailbox. No one rang the doorbell, there was no note, no phone call, and no explanation why no one ever arrived. The un-professionalism is apparent. I would not recommend this company to anyone.

Description of Work
Removed the old system and installed a new YORK Affinity series furnace, air conditioning unit. air cleaner, humidifier, communicating programmable thermostat and tankless hot water heater. It was a long 2 day job for a three man crew which they handled professionally and courteously. I am very satisfied with the value and level of work completed. I would highly recommend them.

WE WERE EXTREMELY PLEASED WITH THE SERVICE, PRICE, TIMELY MANNER.

Description of Work
A/C CONDENSER BROKE IN THE MIDDLE OF SUMMER AND AN ENTIRE UNIT NEEDED TO BE REPLACED, UNFORTUNATELY.

THE SERVICEMAN WAS EXTREMELY HELPFUL & FULLY EXPLAINED HOW THE SYSTEM WORKED. THIS WORK WAS UNDER INSURANCE CONTRACT.

Description of Work
THE HOT WATER SYSTEM WAS CHECKED.

AP Heating and Cooling LLC is committed to excellence in every aspect of our business. We uphold a standard of integrity bound by fairness, honesty, and personal responsibility. Our distinction is the quality of service we bring to our customers. Accurate knowledge of our trade combined with ability is what makes us true professionals. Above all, we are watchful of our customers' interests and make their concerns the basis of our business. Your customer satisfaction is our better business!  …

I've been doing Hvac and Electrical work for over 13 years. I worked for big companies and have experience that there profit margins ridiculously. I thought a few years ago to work for my self and my partner. Im able to reduce normal cost of install by being fair to my customers.  …

ADVANCED AIR INC is currently rated 4.8 overall out of 5.

No, ADVANCED AIR INC does not offer eco-friendly accreditations.

No, ADVANCED AIR INC does not offer a senior discount.

No, ADVANCED AIR INC does not offer warranties.

Are there any services ADVANCED AIR INC does not offer?