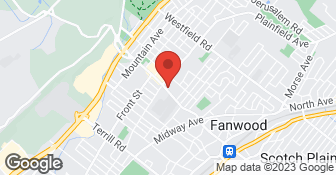 With over 27 years' experience, Frank’s Painting is your trusted full service premier painting partner. Proudly serving the Northern, Central and Southern parts of New Jersey and parts of New York, we offer expert painters, with superb customer service. Our goal is complete customer satisfaction. We perform all phases of painting: interior and exterior; custom painting; prep work; Sheetrock, tapering and compound; plaster repairs; water damage; wallpaper removal; power washing, decks and more. Not job is big and no job is to small

The team did a great job of repairing and painting the ceiling. When we wanted some more finetuning, they had no problem returning to comply with our request. We would call on them again!

Description of Work
A ceiling with spackled paint surface had water damage and needed to be painted as well as repaired.

He is great and his two workers, Giovanni and Alfredo were very professional and precise. They wore their masks and kept things safe. They cleaned their works space every day and were wonderful to work with. Very accommodating. I would highly recommend them and I would definitely hire them again.

Description of Work
He spackled and painted in my house and painted my outside door and outside column post. He also painted all the moldings, window trim, and fireplace.

We used Frank's painting for the second time in the last few years. His guy Eddie did a wonderful job converting a room with old wallpaper into a nicely painted area. Frank provides reasonable estimates and he wanted us to be happy. We are very pleased and would recommend Frank's painting to others.

Frank came out to give an in person quote immediately, and his price was very fair (slightly beat all other quotes I got). Frank's team was able to start within a week, and got the whole job done in 3 days. This room has a lot of odd angles but the work was impeccable. From the sanding to the patching to the painting to the cleanup, we couldn't be happier. We definitely plan on reaching out to Frank again for our next job.

Description of Work
Downstairs den needed ceiling patched and painted. We also got the walls and doors painted in the same room.

In connection with some recent water damage caused by a leaking waterline connection to my fridge, Frank was able to perform removal and installation rapidly even over a busy summer season. Frank rapidly performed an estimate and got to work after a modest deposit. He accepts Venmo, which is very convenient. Sheetrock installation and painting was very done well and the walls looked nice. Tilework was also very well done and looked nice. All work was done without a need for my presence. I highly recommend Frank for thorough professional work.

He was on time and did great work! Would hire him again for paint work.

Description of Work
Sand and paint the deck on the back of the house.

Frank and his team did a good job in painting two bedrooms and several doors within my house. Frank went above and beyond in making sure the job was done to my specifications and was willing to go out of his way to accommodate certain specific requests that I had for the job, including researching the right paint to use. Frank did a good job of communicating his status of the job and there was no work that needed to be re-done. I would definitely hire again!

Description of Work
Painting of two bedrooms and three doors

Description of Work
Indoor and out door painting.

Frank had one person working here who showed up on time (8:00 am) and stayed until he finished with one aspect of the job. They finished in two days and moved all furniture back to its original spot

Description of Work
Frank and his crew did an excellent job. They also accomandate me in cleaning up each night so I could sleep in my bedroom

Excellent job. Frank fixed damage to ceiling drywall caused by a leak and painted ceiling afterwards so it looked seamless. Cost of work done was much lower than estimates provided by other companies. I would definitely use this company again. It has my highest recommendation.

Had Frank do an interior paint job and wallpaper removal. He was very punctual and got the job done on time as promised. Walls look like new. A few spots of paint here and there on the floors but came off with some hot water and a screw driver.

We were very pleased with the quality of the work and plan to use Frank for our next painting project!

Job completed timely and within terms & date quoted. Crew was professional and did nice clean up. Job was done in July, and though an issue (not due to anything related to painters or their work) Frank responded promptly and did quality work in fixing the spot.

Description of Work
Paint entire apartment prior to moving in.

Job went great! Frank & Co had painted our condo when we moved last Feb, so we were glad to have people who know what they're doing come back to perform the work.

Frank and team were great and would highly recommend! His quote came in below others and I was encouraged by all of the positive Angie's List reviews. Turns out they were right. Frank was very responsive via text and showed up when he said he would. Painting the entire home took about three weeks but it was a big job given the state of some of our walls. My wife and I were very happy with the work performed and have no issue recommending Frank to local family and friends.

We had a terrible experience with Frank. His workers did not complete the job that they were asked to perform. When we came to the apartment to review their work, there were coffee stains on the wall, they broke the wood trimming on the floor, while they started to do the caulking job requested, they clearly didn't finish the job and there were several sections that they did not cover. The job was clearly not completed, and when we asked him to return to complete the job, he said he would stop by "when he's in the neighborhood" to make the repairs. He never did stop by to repair the work. We called several times to remind him of the unfinished work, including a couple weeks after the job, a month after the job, and two months after the job. When we called him two months later, he hung up the phone on us. This person is a fraud. We would never do work with him again.

Thank you for taking your time and please look over all of Frank‘s painting job reviews over the last 10 years. . This job contract was to paint ceiling and walls only and matching existing color. . After the contract was awarded to me they decided to change the color . it went from being one coat job to requiring three coats to cover over the dark Color at no charge to customer. . . Then she asked for a closet to be painted . I charge her $ 100.00 then demand other closets to be painted at the end we need to paint two more additional closets. Which we did for a total of the original $ 100.00 she requested we also paint doors and door-frames and trim . We painted additional six doors and door frames at no cost. . . She was requesting to many demands not willing to pay. . tried my best accommodate her as I do in all my jobs she was very difficult to please. . When we left everything was fine days later she have several complaints. . .
5.0

I hired Frank based on all of his amazing reviews online and I was thrilled with my decision. Frank responded to my inquiry immediately and scheduled a tour for a time that was convenient for me. He made everything easy. I’ve worked with some contractors who try to upsell you but Frank didn’t try to make me increase my scope. Instead he worked with me to get my paint project done on my budget. I was so appreciative for his help. On the actual paint day, his staff was amazing and paid attention to every little detail. I have an older home with high and ornate ceilings and they made sure every nook and cranny was painted with precision. I’m thrilled with the result and can’t wait to show my beautiful home to my friends at my housewarming. Thank you Frank and your amazing team for everything!!!

Great! Frank and his crew are the best! This is the 2nd time I've worked with them. The first time they painted our entire office during our renovation. This time they worked at our house. Sanded our deck, fixed mistakes that a previous and might I mention, horrible outfit basically destroyed.

Description of Work
A back deck rehab

Over all excellent job with some hiccup that was corrected. They work hard to make the stained ceilings and walls looking perfect. Owner Frank and foreman Eddie are very responsive to requests.

Frank's crew did a great job! My rooms look better than they ever have. Frank is polite, punctual and a great communicator. I would recommend him highly.

Everything with perfectly. He was able to get the job done on extremely short notice.

Five Star Painting provides interior painting, exterior painting and accompanying services. We are licensed, insured and EPA lead certified with a two-year workmanship warranty. Hands-on owner, Mark Mandel, is your point of contact for all steps of the project. In addition, a full time foreman is always on site to manage an experienced painting crew held to high standards of workmanship, respect and punctuality. Review dozens of local references backed by the stability and expertise of a nationally recognized painting company since 1995. Your satisfaction is our highest priority. Free detailed on-the-spot estimates.  …

How is Franks Painting overall rated?

Franks Painting is currently rated 4.9 overall out of 5.

What days are Franks Painting open?

No, Franks Painting does not offer a senior discount.

Are warranties offered by Franks Painting?

No, Franks Painting does not offer warranties.

What services does Franks Painting offer?