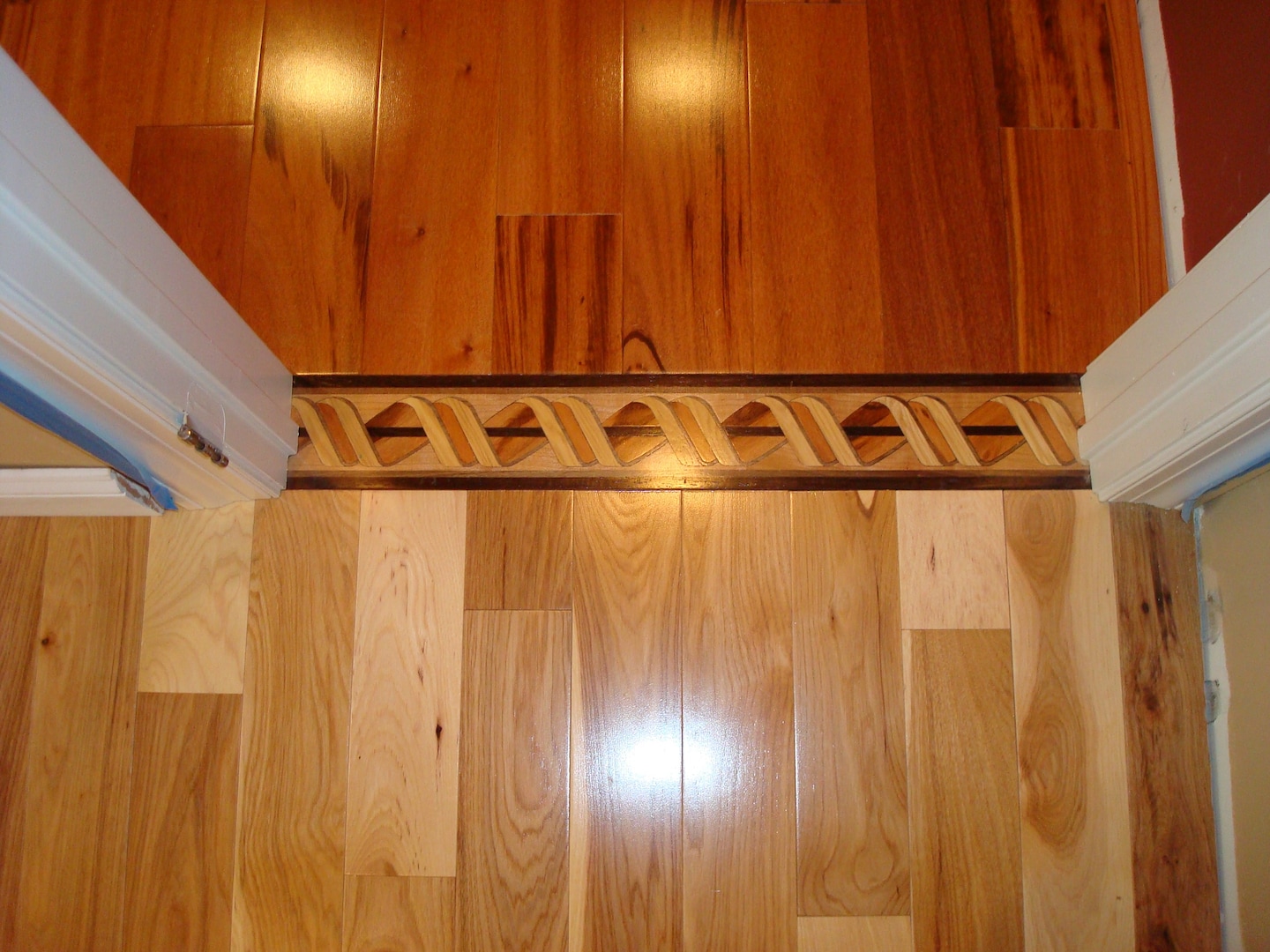 Contact SCL Flooring in Ramsey, NJ, to learn more about our comprehensive flooring services, including installation, sanding, and refinishing of wood floors both natural and prefabricated....

Steve was great. Friendly and a master craftsman. Already discussing next engagement.

Excellent work! Steve is a stickler for perfection and won't leave the job until all the details meet his high standards. I own a old house so the floors were far from level, however Steve navigated through this perfectly and the floors look great. I would recemmned to family and friends and plan on using SCL Flooring again.

Steven Leger and his work crew of two men arrived on time; we were given guidance on the types of stain options, advantages and disadvantages of each type; color choices. They sanded down the old deck so that every plank was totally cleaned. They replaced rotted boards on the deck and the stairs. Then they stained the whole deck and the railings. They did all this in one full day's work. All three men were completely professional.

Steve and his crew we're extremely professional. He explained everything and provided options on what he could do. The job was finished in 1 1/2 days. Extremely happy with the results.

Description of Work
We had a year old deck that needed to be sanded and sealed.

This is a truly amazing professional. Steven came to my rescue just days before Christmas and the arrival of family, after I had water damage and my kitchen floor buckled!! He went above and beyond to take care of me. He is courteous and proffessional and very acccomodating with his scheduling and my budget. Great pricing!! Everything about this experience was perfect (which never happens dealing with construction)! I cannot say enough and I strongly recommend!!!

I cannot say enough about Steve and the outstanding work he has done for us. He really knows the trade inside and out. Steve is always responsive and willing to answer all my questions. He genuinely cares about his home owners and engages with them to make sure the work is understood. Steve is dependable and reliable and the quality of the workmanship and customer service far outweigh the cost paid. He is very dependable and shows up when he says he will. Always follows up to ensure that all my expectations are being met. He is also accommodating with your budget and schedule as well. I strongly recommend as Steve is an Extraordinary Professional.

Job was done beautifully. I had several boards replaced and the entire porch sanded and stained..It looks great. Very punctual Price was reasonable, much less than another estimate

Description of Work
Repair and stain of front porch

We had a second floor mahogany deck which should have lasted 25 years but only lasted 12 due to poor construction (the boards were butted next to each other, with no space for drainage.) We got several estimates from contractors. About half said we had to tear everything down and rebuild from scratch, about half said we could reuse the supporting structure and railings, and just replace the deck boards, which was what we believed. Steve was in the second camp. His wasn’t the lowest quote, but he seemed extremely knowledgeable and proud of his craft. He kept us well informed of his schedule, and performed the work excellently. He ran a bit over schedule, but that was a good thing. On the day he was supposed to do the sanding and staining, he showed up with his crew and equipment, and we discovered that the deck had not dried up completely in one spot after the heavy rains we had had. Many other contractors would have just completed the job that day, even though the results might have suffered. Steve decided to postpone the work, even though he might have lost a day’s work because he had nothing else scheduled. He also was very detail oriented, and did many extra little items for us. We highly recommend SCL.

Steve was very flexible and is extremely knowledgeable, skilled and experienced. He was very patient, and he and his crew did a great job overall, especially replacing/repairing damage. His rates were very reasonable, considering the amount of effort and work involved. I recommend using his services.

Description of Work
Floors in 100 year old houses needed refinishing and in some places, repairing.

Their work was excellent, did what was promised and it came out nicely. It was also done on time.

Description of Work
Repair work on our floor, which was then refinished to blend.

They did a great job, it looks like a new deck, I would highly recommend.

Description of Work
They sanded and stained out deck.

It went very well. It exceeded our expectation, In addition to all the work they did for us, they also did some extra repairs to the molding, floor and doors. They are very meticulous , on time, responsible, clean and easy to communicate with. They take great pride on their work.

Description of Work
They refinished all the hardwood flooring in the house, and did some repair.

They were very respectful of our space. They quality of their work and price was great. I will recommend them and use them, again.

I was happy with their service. They did a great job. I will definitely recommend them to anyone who needs hardwood flooring.

Before starting this flooring project, I did my homework and spoke with six different vendors. Steve of SCL Flooring explained everything professionally and his price was very competitive and fair. Probably due to his years of experience, Steve had a vision of the work I planned to do, and made suggestions that I did not hear from anyone else. That impressed me and I followed his suggestions. Steve is a hands-on owner that was at my home each day participating in the work. His staff members clearly know their job as well and they were each polite and professional. Care was taken at every part of the project to properly cover and protect my home as they sanded, stained and put down polyurethane. The final result was that I now have beautiful floors in my home. I would highly recommend Steve Leger of SCL Flooring.

The job went really well. I thought that it would be more complicated; But Steve, (being the pro that he is), first considering all of our needs, giving us the benefit of his experience and knowledge of flooring; Orchestrated the job with the grace of a seasoned professional. I couldn't be more pleased with the outcome. When the job was completed, everything was cleaned up and orderly. Steve also helped me with some good advise concerning another project I am considering.

The floors look fantastic. Steve was able to seamlessly blend the hardwood that had been covered with carpeting with the hall and staircase, which was uncovered. Very happy with the quality of the workmanship.

Description of Work
SCL refinished the hardwood floors in 4 bedrooms, the main hall and a staircase. It entailed removing old wall-to-wall carpeting, sanding and finishing the wood.

Steve and his crew did an amazing job of refinishing the wood floors in all of the house. Steve went above and beyond our expectations and even helped us with other existing issues in the house. We are extremely happy with his work and will definitely call him in the future.

Description of Work
Refinished the wood floors in our entire house. Repaired and replaced the stair rail. Redid wood floor in half bath. Reinforced joists under half bath.

Steve is a true craftsman who takes great pride in his work. My floors are beautiful. I highly recommend him.

Description of Work
Refinished the floors throughout house.

We had SCL Flooring refinish the floors of our 1000 sf ranch house in Northern NJ and were extremely impressed with the responsiveness of Steve (the owner) and the results. We decided to go with Steve because he answered all of our questions, gave us honest feedback on what would look best in our house, and finished the job on-time and on-budget. Steve and his crew of workers were extremely professional and took great care and pride in their work, which resulted in spectacular looking floors. We would definitely recommend and use Steve and his team again.

The work went as well as I expected. I like Steve and his attention to detail. His pricing was good and work was done very well. In the beginning, 1he spent a lot of time talking to us about options, ideas and educating us too. I would definitely call on him again in the future.

Vinny and his team were great. He was very responsive and we were able to schedule the work quickly. He explained the pros and cons of leaving and refinishing part of the floor that was in decent shape and replacing the remaining portion, which was very damaged. The work was completed in a day and a half. The floor looks great. We got two other estimates. Vine was very competitive. The floor looks terrific. Very happy!