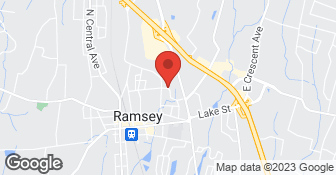 Russell W. Anderson Inc. employs skilled employees, each safety trained and familiar with OSHA requirements. We provide you, our customer, with the personalized, quality service you deserve. At the time of acceptance of our proposal for specified services, we require a deposit (usually 25%) with the balance due upon job completion. We obtain all required municipal permits and make all necessary notifications prior to beginning work. Visa/MC/ AMEX/Discover cards gladly accepted....

Outstanding. Unbelievable efficiency, excellent clear communication, informative friendly, and tremendous work! Made what I thought would be an extremely stressful experience an absolute pleasure. I can only highly recommend Russell and his services.

Highly recommend Anderson Tank Company. The owner is extremely a pleasure to work with. He is polite, friendly, reliable, knowledgeable, and really takes the time to answer questions. Russ was very conscientious during this pandemic and made us feel safe, as he and his team wore all the required PPE. Russ took the time to effectively get permits through our town, which during the pandemic has been very difficult to do. Once it was cleared, they scheduled the work to be performed. There was tree in the way of the job that means a lot to us, he was able to work around the tree and it went unharmed. All communication with us was through email and phone, so we can refer back to it. I can’t say enough about this company and the team at Anderson Tank Co. I will be using them for years to come and highly recommend them in all of my realestate transactions. Thank you!! The Roginski‘s

We wanted to remove the underground oil tank in conjunction with the oil to gas conversion we were having done at our home. We are glad everything went well with this part of the project and would like to share our experience. The owner of the company, Russell Anderson, came for the estimate. Since we wanted to fully understand step by step on everything that was involved (such as type/size of excavator used, how it will go on our property to reach the tank, possibility of sidewalk/drive way damages, and procedures for the town inspection, etc), we discussed all the specifics of the job with him. Mr. Anderson was patient and answered all the questions. In addition, when we had further concerns, he responded to our emails in a timely manner. So we felt confident signing the contract. A week before the scheduled tank removal, the technicians came and pumped out the oil in the tank for us. This was because we had concerns with the boiler contractor's work, and wanted to know if the tank can be removed sooner. Mr. Anderson was not able to move up the tank removal date, but he said the technicians could come beforehand and pump out the oil. They came as promised and pumped out the oil beforehand. This was really great customer service. On the day of the tank removal, Mr. Anderson came with two technicians, and the technicians began to work right away. Wood boards were placed on the curb/sidewalk and the lawn, so the area was protected from the operation of the excavator. They then used the excavator to remove two bushes in the vicinity of the underground oil tank, and slowly dug out the dirt until the tank was exposed. A hole was cut on top of the tank, and one of the technicians went inside to remove the sludge. Then the tank was taken out and placed on the side for inspection. We are very blessed that the tank was in great condition and there was no leak at all. The inspector came, looked at the tank and the big hole in the ground, saw that there was no leak and signed off on the approval. The hole was filled with dirt and the bushes were replanted. They also went inside the house to remove the remaining exposed oil lines, and patched up the floor where the lines were. That completed the process. It took about a half day only. After we received the final invoice and paid, we received a folder with our town approval and certification that the oil tank was removed by the company. Everything went smoothly and and everything was completed in a timely manner. (One note: We did have to buy about 10 big bags of top soil and compact the work area ourselves afterwards because that was not done. The soil should be compacted because if it is not, you basically sink down when you walk on it. So we would recommend that be done by them if you are removing an underground oil tank). Bottom line is, if you need to remove an underground oil tank, definitely include Anderson Inc. on your call list and consider them for the project. Mr. Anderson and the technicians are very professional and pleasant. Highly recommend!

[member name removed], Thank you very much for your Angie's List review. It was a pleasure to serve you and your family! Have a Happy Thanksgiving! -Russ Anderson

We are a full service Heating and Cooling company. We employ Nate Certified Technicians, Epa CertifiedTechnicians. Our Home improvement License # is 19HC00144800. We also are a Lead Certified Contractor. Our Electrical Division License # is 11850B. Award winning.  …

Resto Wizards is an IICRC certified, non franchised, and local mitigation and emergency service provider that specializes in the cleanup, restoration, and reconstruction of residential and commercial properties damaged by water. fire, mold, sewage, smoke, storm, wind, and other damages to your home or business . Our approach is to provide our customers with practical, timely, and lasting fixes to any damages caused by a storm or incident. Our goal is to ensure that we leave our customers with peace-of-mind knowing that they are in good hands and that their lives and homes have been brought back whole.  …

Castlton works closely with Realtors, Attorneys, Insurance Companies, and fuel oil suppliers. Castlton has an A+ rating with the Better Business Burea. The owner has been in the environmental business for years, and continues to educate himself, as well as team. All team members are osha trained, CPR, confined space, FEMA and flag personal. Castlton Environmental Contactors LLC is licensed to remove or abandon your Underground Storage Tanks (UST) in New York and New Jersey. All castlton personal are trained in remedial services and vacuum truck services . 24/7, Castlton Environmental Contractors trained and dedicated staff is prepared to mobilize its fleet of spill response vehicles and equipment to your site. Castlton responds to all hazardous and non hazardous materials. Castlton will respond to all surface water spills, roadways, hydraulic fluid, petroleum , and chemical spills. We are a full service environmental company.  …

We offer all oil tank and related environmental services.

Russell W. Anderson, Inc. is currently rated 5 overall out of 5.

No, Russell W. Anderson, Inc. does not offer a senior discount.

No, Russell W. Anderson, Inc. does not offer warranties.

Are there any services Russell W. Anderson, Inc. does not offer?

We offer all oil tank and related environmental services.