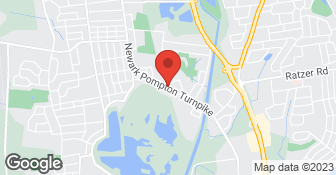 American Home Appliance Service Company offers top-notch appliance repairs for residents in Wayne and the surrounding areas. When you need quality refrigerator repair, dishwasher repair, and other major home appliance repair services, we’re the team you can trust. With over 40 years of experience with appliance repair, we can offer you professional results and superior customer service!...

I wish I had looked at their history of reviews before doing business with them. My fridge periodically leaked, and now and then the ice-maker and water dispenser didn't work. There was a $120 charge for them to come and diagnose the problem. Once there, the tech said he knew absolutely what the problem was, He said one malfunctioning part was causing all of the trouble, including the problem with the ice-maker, and it would cost $114.72 in addition to the $120 we'd already paid to fix it. We said fine, and paid the additional $114.72. He said he'd be back in a few days to install the new part. He came back a few days later, installed the part, and he said the fridge was now 100% fixed. Great we said. Then he left. And our ice-maker never made ice again. It went from periodically not working, to NEVER working. We called the next day to say the ice-maker wasn't working, even though the tech said it was fixed after he'd left on his second visit, and after we'd already made 2 separate payments of $120 and $114.72. They said they'd send him back out. He came back the next day and now said we needed a new ice-maker, and that would cost another $200. Remember this was after he had already been out there twice, charged us twice already, and after the second time had already told us the fridge was totally fixed. We threw him out of the house, and called the company to complain. We got nowhere with that, and then filed a complaint with the Better Business Bureau. After we filed the complaint they responded and offered to install the ice-maker for just the cost of the part, no labor, for a THIRD CHARGE of something like $80. But they couldn't own up to their mistake, There was no accountability. They couldn't just say that the tech made a mistake (twice). Instead they lied and claimed that the tech had never stated after the fridge was completely repaired when he left after the second visit (AND that he said he knew exactly what was wrong with the ice-maker after the first visit). Liars, I wouldn't let them change a light bulb in my house.

Description of Work
"Came when promised and did work as described. Will use this firm again."

Since I have already spent more time than humans can normally expect to spend on such matters, I offer this nutshell appraisal: DO NOT EVEN THINK ABOUT USING AMERICAN HOME, unless, of course, you enjoy months of inferior workmanship (3 VISITS BETWEEN LATE MARCH 2014 AND MID-MAY 2014 AND NOT EVEN FIXED), a phone system that actually disconnects your call before getting through and, even if u don't get disconnected, fix a meal for yourself for you will have plenty of time to enjoy it, as you will have an endless wait, faxes ignored and, when i asked the owner/.manager to call me......NOTHIN'. Stay far away from these idiots. I used MY HOME APPLIANCE SERVICE, based in Woodside,NY and, in just one single visit, my problem was corrected.

Description of Work
I called American Home appliance to fix my ice maker. The service man came late and he put in new parts but the ice maker still did not work and as a matter of fact it was leaking into the freezer so I was actually worse off then before. When I called him back he was very rude as if I was the one to blame. He screamed at me over the phone. I would not let that arrogant man step one foot back into my home. With the help of over the phone assistance and a plumber we were finally able to get the situation under control. I only wonder if I even needed the new parts he installed incorrectly.

Description of Work
American Home is a repair service that the Whirlpool/KitchenAid warranty extension company uses. While I have not been happy with having to set up appointments through the warranty extension company, I have enjoyed my experience with American Home itself. American Home was about the third company that the warranty extension service sent to my home. I was initially reluctant because I live in Westchester County near the Long Island Sound, and the company is based in New Jersey, so that is a significant distance from my home. As it turns out, only one repairman services this area, a very nice young man by the name of Mike, so whenever I request American Home, I know I will get the same repairman whom I like and with whom the dishwashers now have a history. So here is the story: On the Friday before Thanksgiving, one of our two dishwashers broke. We were having company for the holiday, so that wasn't an optimum time for this to happen. When I called the warranty service, the only company that could service the dishwasher was American Home, the day before, so I agreed. Mike called around 9:30 or so to say he was coming that day. Although Mike was delayed on another job, he nevertheless did come and was able to troubleshoot the problem and fix the dishwasher. However, since ours had been a new model, and the problem was somehow with the solid state control, he knew that it could break again. He also knew that KitchenAid had a replacement part that could prevent the problem from happening again. So he wrote up an order. He also said that it would be a good idea to do the same with the second dishwasher, because it was subject to the same issue and was the same model. He told me that I would still have to go through the warranty service company but to request American Home and he would order the part for the second dishwasher when the order came through. So I did, and arranged for another service the Thursday following Thanksgiving. (The dishwasher worked throughout.) On the day before, American Home called to tell me that the first part was in and wanted to schedule and appointment. I asked about the second order, and she had no record, so I cancelled the first appointment to see if I could find out what had happened. I don't quite recall the specifics, but then I received a follow up call maybe a day or two later from Laura in the American Home office, with whom I had been talking, and she said that she had looked into the matter further and apologized. It seems that American Home had received the second order but because the serial numbers were so close and it was from the same part, the office hadn't realized that it was for a second dishwasher. I was very impressed. First of all, no one ever follows up, and Laura took it on her own to try to figure out what had happened. Second, she was forthright and apologetic, and I really appreciated that. Things happen, and I understand how that confusion could have occurred. So she arranged another appointment, and sure enough, Mike called that morning to say he would be at my house, and he was, and he did the two repairs. So, the next time I need a repair - and I hope I won't - I will tell the warranty service to arrange it with American Home. I just wish I could set it up with American Home directly! But that's the system, which I do not like.

We called them to look at our washing machine that was not working properly. When I spoke to the woman on the phone about the costs, which I wrote down in detail, she never once mentioned anything about a "diagnostic" charge of $40.00 that was additional to the "trip/estimate fee" of $65.95. If she did, I would have written it down. We agreed and the service man came to our house, spent aprox 5 minutes looking at the washer and said it wasn't worth fixing. He said the rubber gasket, drum and bearings would hv to be replaced totalling somewhere in the $800.00 plus range. Obviously we said no, we would just buy a new one. I said so I owe you $65.95 right? Then he told us about the additional $40 charge for his 5 min of nothing. What a gouge job, beware of this nonsense and don't call these people for an estimate! P.S. While he was standing there, the service man starts to verbally debate with my husband about his political beliefs, saying that my husband was wrong!! Talk about unprofessional.

Description of Work
Came out to our house to give an estimate.

Since 2017, we have been specializing in appliance repairs for all major brands and models of appliances! Washers, dryers, microwaves, refrigerators, dishwashers, ovens, ranges, and more! We guarantee your satisfaction and we won’t leave until the job is done right. We pride ourselves on the quality work we provide, while delivering great customer service! Check out our services offered and call or click today!  …

Insured
All statements concerning insurance, licenses, and bonds are informational only, and are self-reported. Since insurance, licenses and bonds can expire and can be cancelled, homeowners should always check such information for themselves.To find more licensing information for your state, visit our Find Licensing Requirements page.
General Information
Free Estimates
No
Eco-Friendly Accreditations
No
Payment Options
Check, Visa, MasterCard, American Express, Discover
Warranties
Ask for details

No, American Home Appliance Service Company does not offer warranties.