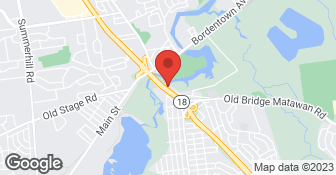 At Decora Tile & Stone, our craftspeople will coordinate your entire bathroom or kitchen remodeling job so that the electrical and plumbing specialists can complete their tasks with ease. We work with all types of stone, tile, granite, marble, and other fine materials to create a one-of-a-kind environment, indoors or outdoors. We work successfully with all craftspeople (ours and subcontractors) on custom baths, kitchens, patios, dens, and other detailed stonework. ...

EXTREMELY high quality job: Jacob was highly recommended by a friend I’ve been working with, for tiling of the hallway bathroom, here in East Brunswick. However, by surprise, before we got around to that tiling job, the shower drain in a completely different bathroom had started to leak through the ceiling downstairs (which was done by “so-called professionals” over a year ago). When I called Jacob, he was able to come by quickly, and started/completed the work in just a couple of days. Not only does the shower floor look amazing (especially in comparison with what the “so-called professionals had done prior), but Jacob’s crew did everything CORRECTLY “under the hood”. Meaning, when installing a custom shower floor, the pitch goes BELOW the waterproofing. Jacob knew this (although the "other people" over a year back did not). Jacob also understood the use of pea gravel around the shower drain, and to not cover all weep holes up. He also suggested and made some additional improvements, such as the use of epoxy grout, instead of the stuff we used before. In summary … you can go to ANYBODY to tile a floor, and it might or might not look good. But the importance is what’s UNDER the tile if you want the job to last. And Jacob and his team not only did it right, but it looks AMAZING. You can be sure I will be calling Jacob back to tile the hallway bathroom floor & bathtub wall when we’re ready.

Description of Work
Repair of a shower floor and drain

Description of Work
Replaced kitchen floor with porcelain tiles and kitchen counter backsplash. From helping us make the best choices to installation their service was exceptional. We were extremely pleased with Decora and will definitely use them again.

Hi.. My wife and I went to dozens of tile stores when we did our kitchen back splash last year. We had a very reputable contractor to do the work for us. (etc home improvement.. a company we found on angie's list ).The products they carried. ..no one else had.. And the amount of time Christina and Jacob spent to design our kitchen makes it worthy to be put in magazines. When it was time to do our bathrooms. It was like one stop shopping. I recommend them to Everyone.

Description of Work
Spent a lot of time to plan out and carry products no one else carried for 2 of our bathrooms and kitchen backslash.

Decora did a wonderful job! The final product exceeded my initial expectations. The job was completed according to the time frame we initially discussed and the final cost was identical to their estimate.We highly recommend this provider! From the moment you walk into their store, until the completion of the project they are extremely honest and professional. They are truly perfectionists in what they do. I finally have the bathroom I have always wanted!

I didn't know how to put a review for them. My God! they did six days. I took a week off. I've got a five star bathroom and a half star house! It is unbelievable. It is beautiful. I picked out this tile and it looks like wallpaper. They had these palettes of what goes with what. I have border, bottom floral and the top. The porcelain tile was imported from Spain. I wish I knew how to let somebody know how good they did. I got estimates from $23000 and I don't live in Taj Mahal. This bathroom is 8 x 10. Another provider wanted $23000. I had another guy. I told him exactly what I wanted from this place in Old Bridge. He stopped by and looked at the tile that I wanted. It's floral. It looks like wallpaper but it tiles. He gave me a price of $16,500 after knowing exactly things I wanted. This guy did for $12000. I had a drip. He had three trucks here. He is like, "You've got a drip?" Something just wasn't tightened up enough and I don't know nothing about plumbing. The last time they came out was for the minor dripping thing. He came right out. Jacob was right here. It was a no-brainer with this place. I wish he did kitchens. I can't believe he doesn't. I feel like knocking on his door and saying, "Jacob, why don't you do kitchens?" It was unbelievable. Sometimes I couldn't believe there were four grown men in this bathroom working. Nobody is so good as he is. I told him, "I'm taking vacation days. I need you in and out." We had snow. It was during the end of February and beginning of March. It was so terrible. I was like, "Please." He is like chopping ice away so that the guys didn't slip bringing in the vanity. These people need to be recognized. I've already told Jacob, "As soon as I get the place painted, I'll be in or pick out what I want to do with the living room, the hall and the kitchen." I'm definitely going to reuse him. He is great.

Description of Work
We just had the bathroom done.

We haven't made decisions on the tile yet but they're among the people we may use. They seemed knowledgeable. They were nice, polite, and gave us the information we requested.

Description of Work
They gave us a verbal quote a few weeks ago. It was for a tile purchase.

THis was the best experience I have ever had with a contractor.

Description of Work
They completely remodeled my master bath. I love my new bathroom. They did a great job and very quickly. Came everyday. I didn't have to wait for them to finish or work on someone else's job. They came everyday and finished. Very highly recommended.

I thought they did a high quality job.

Description of Work
I used Decora Tile & Stone end of last year to tile a shower, put in some shower doors and they also tiled our bathroom floor.

They were outstanding. They came ontime and did great work. The technician even pulled out the old toilet and installed a new one. I would highly recommend them to anyone.

Description of Work
They installed some tile for me.

I would definitely recommend this company. They were very professional and very helpful in helping me choose the tile that would be right for my area. Very reasonably priced and extremely professional with installation, removal of old tile and clean up.

Description of Work
Decora removed old tile and flooring in our foyer and a part of our living room (by the fireplace). The company then installed a 1/4 inch board and mesh covering and then porcelain tile and grout. The entire project (150 square feet) took 2 full days.

THEY WERE EXCELLENT ALL AROUND. THEY DID A WONDERFUL JOB. THEY WERE PROFESSIONAL. THEY CLEANED UP THEIR MESS. THEY WERE ON TIME AND THE PRICE WAS FAIR. I WOULD RECOMMEND THEM TO OTHERS.

Description of Work
THEY PUT IN NEW TILING IN MY HOUSE.

We specialize in tiling services, installs, and repairs -- flooring, backsplashes, showers, bathrooms, kitchens, and more! We guarantee your satisfaction, and we won’t leave until the job is done right. We pride ourselves on the quality work we provide, while delivering great customer service! Check out all the services we offer below and call -or- click to schedule a free estimate today!  …

All About Me. Precision. Punctuality. Commitment to Excellence. Since starting my business in 2010, I've been recognize as a top Flooring Contractor in New Jersey. I provide a wide range of services for all kinds of needs. Whether you're looking to work on an existing space or undertake a bigger project, I Guarantee I can help you achieve the results you seek. Contact me Today to Receive a FREE ESTIMATE.  …

Decora Tile & Stone is currently rated 5 overall out of 5.

No, Decora Tile & Stone does not offer eco-friendly accreditations.

No, Decora Tile & Stone does not offer a senior discount.

No, Decora Tile & Stone does not offer warranties.