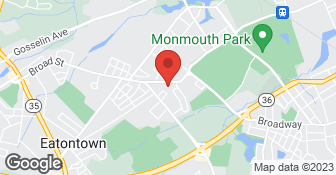 Installed the rough plumbing first and passed inspection. Installed plumbing for sinks and was told by inspector that the hot and cold connections were on wrong sides under sink and temperature of hot water was too hot. Not a big problem. I purchased a very expensive claw foot tub that came with specific fixtures and pipes that had plumbing dimensions and measurements and specs of where holes should be drilled for the pipes. He took the wrong measurements and drilled the holes through the floor and travertine tile in the wrong place and the tile had to be ripped up and re-installed. The second time the holes still weren't exact and the pipes coming through the floor noticeably bent so they could fit through the stabilizer bar that is attached to the tub. Horrible! He used a clear flexible rubber pipe that supplies water to the toilet instead of the brushed copper pipe that matched the rest of the fixtures and handles on the toilet. When we informed him that he had to use the pipe we paid extra for that matched the rest of the plumbing fixtures he had to take out the tile and drill another hole because the existing hole would not work with this pipe. Each time work had to be re-done he told us that it would not be done for at least a week because he was working on other jobs. Finally, after job was completed and I looked in the crawl space I saw that he didn't remove a bunch of pipes and plumbing fixtures that he ripped out and was supposed to dispose of. Very sloppy is an understatement. Not skilled enough or pays enough attention to detail for high end jobs.

Description of Work
Was hired by my GC to complete all plumbing in new Master Bathroom which include running pipes for and Installing two sinks, toilet bowl, shower and stand alone bath tub.

I thought he was polite, cleaned up well after himself and his pricing was A+.

MyGuy Plumbing specializes in residential plumbing services from water heater and boiler repairs and installs as well as toilets, faucets, and specialty items. We repair waste and water piping and basically anything that is plumbing related. MyGuy Plumbing also offers services for complete remodeling as well as new construction. We are a family oriented company who will be glad to help solve any plumbing issues that may arise.  …

Our expert plumbers at Garon T Plumbing deliver unmatched plumbing services to homes and businesses throughout Brick Township, Howell, Point Pleasant, Freehold, and surrounding areas. We have over 28 years of industry experience and pair this expertise with the most advanced products and methods available to ensure high-quality and lasting results. We are so confident in our solutions that we back up our services with a 100% satisfaction guarantee. Our team customizes every solution to your specific needs and always works quickly and cleanly. We will be by your side when you need us most, proudly offering same-day appointments. We offer $25 discount for all military vets and senior citizens. Contact our team today!  …

Arctic Air Conditioning is a family run business that has served Monmouth, Ocean, Middlesex, and Somerset counties since 1977. We now also service Essex, Morris, Union, Burlington, and Hunterdon. We specialize in residential and commercial Air Conditioning, Heating, Humidification, indoor air quality. Our other services include Plumbing and Electrical. Our philosophy is to provide top of the line equipment with the best installation and service available in the industry. We are an award winning Lennox Dealer and Home Depot Service Provider.  …

How is Final Adjustment Plumbing and Heating overall rated?

Final Adjustment Plumbing and Heating is currently rated 3 overall out of 5.

No, Final Adjustment Plumbing and Heating does not offer eco-friendly accreditations.