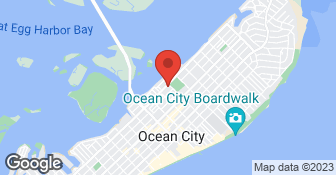 We have been in business for 31 years. Expert carpentry and unremitting attention to detail are the hallmarks of our fine work. No job is too small for us. From building you the home of your dreams to changing the light bulbs in your rental property here in Ocean City, New Jersey we can do it all!

Description of Work
Replacement of 3 windows.

They had already been doing work in our condominium building and doing similar projects as what I wanted done. It would have been Matera Builders and the other guy. Matera Builders had a much higher bid but it was a correct bid. It was higher than what I think the other guy would have come in with. I was favorable inclined to it only because they had lots of experience and their references were also very positive. They have an actual facility and I think they have higher overhead then the other guy. They were very professional. They have an organizational and they have more people that actually produce this kind of stuff. They were very thorough, very helpful and very clear as to what they were biding. Bob Matera is the principal. He came out and he was very responsive. I made some changes and I added some things. He obviously really knew the product line which is what I had specified for the job. He was very helpful in ideas. He was helping us understand the business, the reputation of their business, the longevity of their business and their relationship with the window company. So I really felt very comfortable with them. I realized that a lot of their experience was reflected in their pricing. They definitely had lots of experience.

Description of Work
I got a quote from Matera Builders on window replacement and new screen door work.

Joe's Electrical Service is an Owner Operated electrical contracting company. We are focused on providing reliable and prompt service to residential and commercial customers.  …

We are the premier installer of Andersen Windows and Therma-Tru doors in the South Jersey area. We have a service department to handle all you window and door needs. Almost ALL parts are in stock. No waiting!

How is Matera Builders overall rated?

Matera Builders is currently rated 5 overall out of 5.

What days are Matera Builders open?

No, Matera Builders does not offer a senior discount.

Are warranties offered by Matera Builders?

What services does Matera Builders offer?

Matera Builders offers the following services: We are the premier installer of Andersen Windows and Therma-Tru doors in the South Jersey area. We have a service department to handle all you window and door needs. Almost ALL parts are in stock. No waiting!