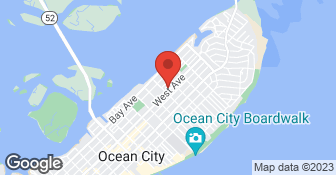 Located in Ocean City, NJ. We are a Family Operated Business, Servicing Cape May County and parts of Atlantic County since 1982.

re Coastal Plumbing, Ocean City NJ In 2011 we bought a Quietside mini split air-conditioning unit for a summer cottage in Sea Isle City. This cottage is occupied for about 30 nights a year, more or less. This summer (2017) the indoor unit started leaking water, or condensate. Coastal came down and inspected/cleaned the unit, for $135.00. The next time we used the air-conditioner, the unit leaked again. This time Coastal returned, and again checked, for another $135.00. The second time was not the charm; on a night following the second visit, we were awakened by the sound of dripping water (on the fireplace mantle) after the machine had run for six hours. I wrote a very polite letter to the owner of Coastal Plumbing, Mr. Phil Wilson, seeking advice as to whether to replace, or how to fix etc. The machine was only six years old, and operated only a month or so each year. Mr. Wilson never responded. I contacted Laury Heating, inVineland NJ. The men came out, spent a few hours analyzing the problem, and advised that there was a refrigerant leak. They replaced the refrigerant, and tested the system, advising that this would only be a temporal fix; how long it would work they could not say. Fair enough. The techs gave me a full analysis, with no recommendation and no sales hype. The choice was between a fairly expensive overhaul of a six-year old machine, or a new air-conditioner. Two weeks later I had them replace the entire machine with a Mitsubishi model. The Laury staff (techs and office people) are assiduous about communicating, and follow-through with the customer. We are disappointed with Coastal, and would not recommend this company. There is NO excuse for ignoring a customer who is asking for advice, particularly a customer who is willing to pop for $5,000 for a new air-conditioner. Steve Britt Plymouth Meeting PA

Project went well, were there when they said they'd be. Good workmanship.

Description of Work
Needed to replace my a/c unit and convert to gas heat.

Description of Work
pin hole leak on the copper tee in the crawl space, the job went well it was an emergency and they came the same day as I called.

Description of Work
Routine maintenance for air conditioning unit. I have been using them for 7 years for heater and air condition maintenance. Have always found them trustworthy, on time, professional.

Description of Work
They purchased a faucet for me and replaced the old one with it. The faucet was almost $650.00, but I did think the labor was high. However, we were crunched for time, so it was worth it to me.

I very highly recommend Coastal Plumbing! I had a situation where a sewer pipe had disconnected at the seam and the leaking water had slowly been undermining the foundation of my shower house. This had probably been going on for a few years. It was turning the area into a sink hole. The shower house was starting to slant and was ready to cave in. I could not lock the door without pushing against the side wall. The broken pipe was hidden and was not discovered until a cement crew found it while replacing our sidewalk. The cement work came to an abrupt halt until this problem was resolved. I called Coastal Plumbing and they were out in less than an hour. They quickly identified the problem and replaced the pipe. It was in a difficult to access spot as there was little room under the shower house. Two and a half hours later, two guys had replaced the heavy corroding cast iron pipe with durable PVC plastic. The bill was incredibly reasonable. I could not be more pleased with their response and their pricing. These guys know what they are doing. i would not hesitate to use their services again.

Description of Work
Replaced parts in the heater and checked system. Price included parts and work was done well. They also perform annual service of both my heating and cooling systems. Their service is always excellent.

The unit for the upstairs heating would not shut off. Was up to 89 degrees. Called Coastal because they had just left from putting it in. Never came back until the next day, when they said someone would be right over. We had to keep shutting the heat down and turning back on because it was the middle of the winter and could not leave the heat off.

They got the work done on time and got it right.

Description of Work
I used Coastal Plumbing to drain the heating system.

They did a wonderful job and if anyone asks me, I will be recommending that company and service. They're excellent. They did the work within a week and a half. They came neat, clean, on time, professional, and I cannot say enough great things about them, from the owner to the helper. The installer did a fabulous job. It just was a very painless experience other than the writing of the check. They were absolutely great about getting the price right away. They were easy to deal with within the process. I asked them about some air conditioner covers, I had them the next day. He gave me helpful tips on preparing the inlet for the winter by the shore to keep them from rusting. He was just a very pleasant guy, very knowledgeable and not trying to up sell. In peak cooling system disaster time and they still were able to get it going and do a great job for us.

Description of Work
I used Coastal Plumbing for heating and air conditioning services.

They arrived on time and the employees were very polite and professional. The work was completed to perfection and the job site was left clean and neat.

Description of Work
I again used the services of Coastal Plumbing to install a toilet and vanity.

Very professional. Very neat. Arrived as scheduled and completed the work. Additionally they replaced my hot water heater and installed an outside shower. The work was completed professionally, the site was left clean and neat. They are a pleasure to deal with.

Description of Work
Removed and replaced my ducts due to hurricane.

I had another plumber come out to clear a drain and asked him to check to see if we had a leak outside along the side of the house. He confirmed the leak and told me to call Coastal Plumbing because the job was too big for him and would require a setion of the pavement to be removed so the pipe could be repaired. Coastal arrived the same day and rather than ripping out the concrete, the young man dug under the concrete, cut the pipe and replaced a section. I was hard work and too alot of time. He was wonderful and saved us the expense of repacing the concrete.

Description of Work
Coastal dug under the cement on the side of our house, cut a section from a leaking pipe so it coud be repaired without breaking the cement. They charged me half as much as another plumber charged for clearing a drain. I would never use anyone else. The gentleman who did the work was wonderful.

We are a small, family owned business that focuses on customer satisfaction. We pride ourselves on giving personalized solutions to fit each customer's specific needs. We find solutions by thinking "outside the box" and getting the job done, the right way - the first time. We offer service agreements to keep your system running at factory performance and extend the life of the system. Give us a call today and "Get Comfortable With Us!"  …

Don't just let anyone handle your plumbing and HVAC services. For services such as installations, problems, or necessary maintenance, you need a licensed professional. Ideally someone well versed in system design, local safety codes, and regulations. Platinum Plumbing Heating and Cooling has a combined total of 40 years experience. It is our mission to provide excellent workmanship and complete customer satisfaction from start to completion of project. In order to understand the needs and expectations of our customers, we take great care to work and communicate with every client in a professional manner. Our reputation is based on service, safety and quality. Give us a call today for a free estimate.  …

Bonded
Insured
All statements concerning insurance, licenses, and bonds are informational only, and are self-reported. Since insurance, licenses and bonds can expire and can be cancelled, homeowners should always check such information for themselves.To find more licensing information for your state, visit our Find Licensing Requirements page.
General Information
Free Estimates
Ask for Details
Eco-Friendly Accreditations
No
Payment Options
Check, Visa, MasterCard
Senior Discount
No
Warranties
Ask for details

How is Coastal Plumbing overall rated?

Coastal Plumbing is currently rated 4.5 overall out of 5.

What days are Coastal Plumbing open?

No, Coastal Plumbing does not offer eco-friendly accreditations.

No, Coastal Plumbing does not offer a senior discount.

Are warranties offered by Coastal Plumbing?

No, Coastal Plumbing does not offer warranties.

What services does Coastal Plumbing offer?