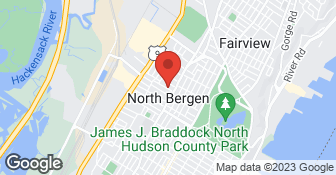 We are a contractor with a broad portfolio of services focused on renovation, addition or expansion and remodeling of residential and commercial property services. We count on qualified staff and all tools to build your projects professionally and with high quality standards and satisfaction. Fully licensed and insured, our job is our best reference, all works are guaranted....

Backsplash wasn't done properly and had to be tore down and completed again. Electrical took more than expected due to no shows and working in whatever schedule they pleased. On top of that waned to charge me more to fix their mistakes. Decided to hire a different electrician to fix their mistakes. Kitchen tiles are already coming off they did not put them down properly.

Don’t hire them. I had to fire them after 3 months. They start my backyard projects without permits and wasn’t until a contractor working next door asked them about the permit, did they go and get them. After they got the permits they didn’t get the required inspections done on the different phases of the project. When they thought they were finished they requested a final inspection, the inspectors (building and electrical) required the other phases inspections be completed first and C.M. had to undo some work so that the inspectors could do they job. C.M. failed 4 electrical inspections and 3 building inspections. Lights were added to the backyard and part of the ground paved, all the work was completed without the proper electrical wiring being checked and the wires were buried under the cement, that and the proper connection to the house caused the electrical inspection failures. After the third failure; the inspector told them that because he could not see how the wires were connected, he required a notarized, certified letter stating the wring was in compliance with all codes and regulations, present the letter or the cement would have to be removed and the wiring inspected. C.M could not/would not produce that letter. C.M charged me a lot of money for architectural drawings, but instead of getting an architect, they had a secretary download some pictures from the internet and submitted them to the building inspector, he of course rejected them. But that didn’t faze C.M. When they had the building inspector come out, he failed them, 1: because there were no architectural drawings but also 2: because he could see the work they had performed. C.M. had to remove some of the work (when they did, they rushed in and corrected some mistakes they made). After not being able to pass the inspections I replaced them with another contractor and am suing C.M for the cost to finish the project. Get everything in writing, everything. They forget what they agree to and change they mind on many verbal agreements after the work has started. They state many things that are not factually correct. They are worst then politicians or used car salesman. They put out a lot of BS and will play you every step of the way, believe very little of what they say. Don’t pay them until everything is completed; everything including clean-up. I paid them most of the money before the 4th of July so that they could have a good holiday. They disappeared for 2 months and wouldn’t answer my calls. I was told that they did the same thing to another customer and she also had to hire someone to finish the job.

Description of Work
Extend back porch and pave backyard

Precision Painting Plus is a well-established painting company serving the NYC area. The Precision Difference upholds ourselves to the highest standards to deliver premium quality, honest pricing, and on-time project completion work for every customer. We only work with skilled, trained professionals that use premium paint for their project. We deliver honest pricing with no vague or hidden fees. With on-time scheduling and daily communication, we reassure customers a worry-free experience. You can count on us to deliver the best project experience for you.  …

With over 10+ years of professional painting experience! it's our mission to paint with perfection through detailed, high quality and affordability to ensure we meet all of your painting needs! We offer timely solutions for all residential and commercial painting. Our customers come 1st and that is why we offer "FREE ESTIMATES" to meet any budget! Contact us today we look forward to servicing you!  …

Bonded
Insured
All statements concerning insurance, licenses, and bonds are informational only, and are self-reported. Since insurance, licenses and bonds can expire and can be cancelled, homeowners should always check such information for themselves.To find more licensing information for your state, visit our Find Licensing Requirements page.
General Information
Free Estimates
Yes
Eco-Friendly Accreditations
No
Payment Options
Check, Financing Available
Senior Discount
No
Emergency Service
Yes
Warranties
Ask for details

How is CM & Son Construction and Electric LLC overall rated?

CM & Son Construction and Electric LLC is currently rated 1 overall out of 5.

What days are CM & Son Construction and Electric LLC open?

No, CM & Son Construction and Electric LLC does not offer eco-friendly accreditations.

No, CM & Son Construction and Electric LLC does not offer a senior discount.

Are warranties offered by CM & Son Construction and Electric LLC?

No, CM & Son Construction and Electric LLC does not offer warranties.

What services does CM & Son Construction and Electric LLC offer?