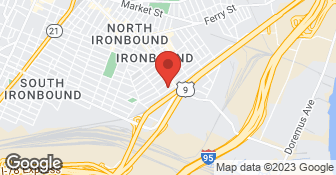 First, let me say that Bryan is a super nice guy and very responsive. He seems to have a commitment to customer service which is why I didn't rate this entire experience as an F. We needed our floors refinished for our small house (a little more than 800 sf, water-based poly). We moved all the furniture out of every room and packed a bunch of it in our kitchen which has access to the basement. They day his guys came, that's when they let us know they needed access to the basement panel for their equipment, meaning we needed to do last-minute furniture moving. Floors were completed in 1 day, but we stayed at a friend's to allow the floors to dry. When we came home 2 days later to check out the floors, while they looked better than before, Bryan's guys had left obvious lap marks in 2 of the bedrooms. Additionally, they left poly splash marks and dirt marks on my freshly-painted walls. I also requested a semi-gloss finish, but the floors look like a satin finish (although Bryan said that's how the Loba semi-gloss looks). It doesn't look bad, just not the sheen I was expecting. I contacted Bryan and he agreed to come back to inspect and repair, which meant re-sanding both bedrooms again and re-coating. To his credit, he offered to give me a third coat for free to make up for the mess-up, but that also meant we had to spend another couple of nights out of the house with our small dog. FYI, I watched his guy put down the poly in the bedroom and then I understood why the bedroom ended up with lap marks: because he doesn't work the grain to the full length of the room, he works the grain in short sections ACROSS the room. I had told Bryan to contact me when his guy was leaving so I could come lock up the house ... crickets. We came back to house to check on things and he was gone, so we had no idea how long our house was left unlocked. Now, 2 months later, we're seeing that the Loba finish he put on the floor is junk (and we got the upgraded one, not the basic). It scratches super easily and is not durable at all. If I drop anything on the floor, guaranteed it leaves a mark in the poly.

Good morning, It's upsetting reading this review after 2 months of completion. I made sure you were happy and everything is right after it was finished. Your wife contacted almost week later and confirmed the floor looks great and thanked for professionalism. You're absolutely right, my guy did make a mistake while applying the "sealer", by leaving lap marks, but it wasn't poly which we can go across the grain applying. Regarding the durability of Loba Optifinsih, is a mid-level finish, is only superior to entry-level (cheap) water base like Absco which is $35 a gallon vs $50 from opti. I DID OFFER a stronger finish because of your small dog, but [Member Name Removed] said it was out of her budget. I'm sorry but you cant expect much of that finish, you cant get the best for the price of a Civic. Even if you apply the best finish, is still wood, not tile, you have to be careful either way. I wish I could post the screenshot of the texts, [Member Name Removed] did send me instructions regarding the door, and I was already on my way back and did mention "I am picking him up." So there was a misunderstanding I assume, but again a couple days later, she texted saying thank and the floor looks great. I wish you would have called me and told me the issues you were having, instead of writing this review 2 months later... I could have worked with you! Again I apologize for the inconvenience, I did make it right.
5.0

Bryan was great! He really listened to what I wanted and I love how my floors came out!

Description of Work
I had my floors refinished.

HD was so professional and clearly explained the process of their work. My floors look great! The job was very well done and I would highly recommend them to anyone who needs their floors done. :)

Better than expected! Renovating floors in recent purchase of rental property after tenant of 20+ years with multiple kids , pets, and grandchildren moved out and beat it up. Would highly recommend!!!

It took him a full day, and kept it pretty clean

Very professional and responsible ! Definitely recommending for my friends !

Floors look great. They were very professional and easy to work with. Very competitively priced and the work was completed within agreed upon schedule.

We specialize in reviving new life into old floors with over 7 years of experience. Wax & Buff is owner-operated and proudly serves the five boroughs and portions of New Jersey.  …

Positano Moreshine, family owned and operated since 1977, specializing in cleaning floors of all types, ceramic, hardwood, VCT, marble, old vinyl, Mexican tile, and all other floor types, including; marble, limestone, travertine, granite, grout restoration and installation. We also provide carpet rip-up and sanding of hardwood floors, and weekly/monthly/yearly maintenance schedules to keep your floors clean and shiny. Best and most reasonable in the business! Free estimates! TWO LOCATIONS TO SERVE YOUR CLEANING NEEDS! Servicing all of New Jersey, Metro NYC and north east PA.  …

Insured
All statements concerning insurance, licenses, and bonds are informational only, and are self-reported. Since insurance, licenses and bonds can expire and can be cancelled, homeowners should always check such information for themselves.To find more licensing information for your state, visit our Find Licensing Requirements page.
General Information
Free Estimates
Yes
Eco-Friendly Accreditations
No
Payment Options
Check, Visa, MasterCard
Warranties
No

No, High Definition Wood Floors LLC does not offer warranties.