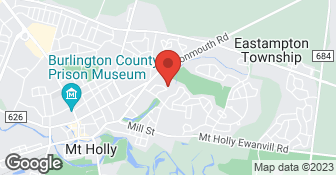 I phoned for chimney sweeping on the 12th, and the first appointment available was on the 19th. That seems reasonable for a successful chimney sweep at this time of year, and we had used them before, so I didn't mind waiting. They called on the 18th, and confirmed the appointment, for between 1:00 and 3:00 the next day. The next day, I took a half day off work, and was home to meet them at 12:00, just in case they were early. At 3:03, they called to say, "We are running late, but we're just leaving our last job to come to you. We're just on the other side of town". They finally showed up at 4:15. One of them brushed from the roof, while the other vacuumed from inside. It took about 30 minutes. The price of $150 is fair for 2 guys to come to your house and perform a chimney sweeping, They seemed to be well equipped and knowledgeable, but had kind of an argumentative, bad attitude. Maybe they were angry that their prior appointments had gone too long, although I notice that other online reviews also refer to a surly demeanor. In retrospect, with losing a half day of work while waiting for them, it should probably have been me who was the angry one. The following day, I noticed there were still cobwebs between the masonry firebox and the steel insert, so I removed the insert surround screen (it lifts off without tools) and brushed/vacuumed them out myself- it took me about 10 minutes.

It went very well. I called and he gave me a time between 9-11am and he was here just after 9am and finished at 11am. He told me that I need some repairs done and that I should get them done right away. That I also should get a cap. He was very professional and was all done in a timely manner.

It went well! I had contacted other vendors, and Four Seasons was the most professional. They were easy to schedule an appointment with. The prices were reasonable in comparisons to other vendors. They showed up when they were supposed to. The service went well.

Description of Work
Cleaned and inspected my chimney and dryer and vents.

Four Seasons responded very quickly and replaced the broken part during their first visit. The price was very reasonable. The owner and nephew are polite and knowledgeable. We have used them in the past and will def use them in the future.

Description of Work
The flue on the fireplace was not working.

This is the 2nd time I have used the services of Four Seasons Chimney Sweeps & Repair LLC. In each instance, The owner & his nephew went to great lengths to ensure the work was completed with the excellent standards which are "head & shoulders" above a prior vendor I dealt with. They take great care of your home & answer any questions you may have. The owner also offered a suggestion to maximize the heat transfer from the fireplace throughout our home. I have recommended their services again to a co-worker. Everyone has been very please with their work as well! See you again next year. Thanks again!

Description of Work
Performed inspection and cleaning. Did a great job.

Arrived promptly the next day at the appointed hour. Did the work quickly and thoroughly. Cleaned up after themselves. Friendly and pleasant. Nice guys.

Description of Work
Repaired and sealed a 4" hole in our furnace vent.

Edward's suggestions were the only repairs that aligned with the home inspector (who I trust very much), Four Seasons was the only company that did not see me as a "quick buck." Repairs were- new crown coat, re-pointed firebox, gap repairs in mortar joints and flue lining, new ash dump and firebox. Additionally, Four Seasons had to remove and replace damper (with pop-top chimney cap damper) and caulk/waterproof side of chimney. Edward saw that I had purchased a new set of Fireplace Doors and installed them free of charge. Four Seasons is professional, thorough, and affordable.

Description of Work
My chimney was cleaned in a very professional manner. A cloth tarp was put down around the hearth and surrounding floor area and the gentlemen brushed and vacuumed the chimney thoroughly. They cleaned up after themselves and were very helpful and courteous.

It went well once we got a full estimate on all that we wanted done. It was more expensive then we thought, but after he explained what needed to be done, it was understandable. Also we received a $35 off the price of cleaning the chimney. It took 3 days to complete, but the bricks had to dry before they could be waterproofed. Edward and his helper were polite , on time, and did a good job. I would definitely use them again.

Description of Work
He cleaned the chimney, replaced 4 or 5 damaged bricks, waterproofed chimney with crown coat and replaced exiting cap with multi-flue cap. This new cap was different from the original one. It was $450.00 , but he offered to replace it with the type that was there, but it would not last, so we decided to follow his advice.

I messaged this company for chimney cleaning with no response. I also called and left a message with my phone number for a call back…they never called back.

Description of Work
No service provided

we only work in N.J. Mr. [member name removed] is from IL. His comment must be about a company in his state.
5.0

Ed from Four Seasons was great to talk to on the phone and showed up right on time to do a crown seal on my chimney. He worked with 1 other crew member and they were both very personable. They inspected the chimney and applied a crown sealer to the masonry at the top of the stack. They also repaired a rubber boot on a vent pipe that was compromised. The original estimate was $250 but after doing the work Ed suggested a lower price or an additional sealer lower on the chimney stack for the original price. For peace of mind I agreed to the additional sealer. They worked quickly but carefully and I'm very happy with the service and finish of the project.

Description of Work
Inspected, sealed, and repaired the chimney on my single family home

They were prompt, professional, and did a great job. They cleaned up everything and at a reasonable price. I have used them twice.

Description of Work
Clean two chimney's a woodstove and a fireplace.

Super service. They were careful and everything was spotless when they finished. Will use them every year and for any other fireplace related service!

Description of Work
They arrived on time to clean the chimney and were done very quickly.

Description of Work
They cleaned the firebox and chimney

Made an appointment for a specific time and date; they gave me a two hour window on the date. On the day of service they arrived right on time. They were curtious and clean - they swept the chimney and did an inspection both inside and outside of the chimney.

Advanced Aardvark is owned & operated by a volunteer Fire Chief, serving over 25 years he knows the importance and safety of clean air and vents, also knowing dryer vents is a leading cause of house fires. We have many years of experience in the industry, our job is to provide you with a healthier and safer environment within your home.  …

Specializing in AIR DUCT CLEANING, DRYER VENT CLEANING, POWERWASHING AND WINDOW CLEANING AND GUTTER CLEANING AND REPAIR SERVICES! We always guarantee your satisfaction and won’t leave until the job is done right. We take pride in ourselves and on the quality work we provide, while always delivering great customer service! Check out our services offered, then call --or-- click to schedule a free estimate today! WE SERVICE NJ,PA AND DELAWARE!  …

We have daily specials So Call NOW 800-203-8319 Nu~Air The Healthy Choice Inc. is involved in Home Energy Audits and is a Building Performance Institute Accredited Contractor. Member of The Eastern Heating & Cooling Council.  …

No, Four Seasons Chimney Sweeps & Repair LLC does not offer a senior discount.