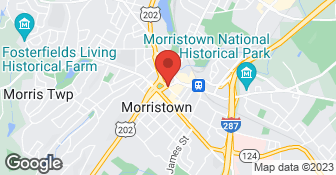 I enjoyed my experience with Mike and his team. They were professional, their price was competitive and they did a great job.

Description of Work
Repaired/Replaced irrigation system due to pool install.

Fantastic!! Showed up when they said they would and installed a beautiful system.

Description of Work
Sprinkler turn on service and provided estimate for a new sprinkler system. |Mike is a great guy.

Initial Estimate and Install - June/July 2014 - I met with Mike and Jackie at the 2014 Denville Street Fair. I've always wanted to add a sprinkler system to my lawn, as I was tired of having my front lawn burn in the summer if I couldn't water it every day using a hose. I gave them my info and scheduled an estimate which was much less expensive than I thought. I always thought that installing a sprinkler system would cost tens of thousands of dollars due to all of the plumbing work needed for the lines, but was pleasantly surprised to learn it was far less than that . They also came in cheaper than other estimates we we received. After discussing it with my wife, we agreed to go with Keeping it Green and were very pleased with our decision. We were also pleased that they did the right thing and applied for the appropriate permits through our town. (unlike other less scrupulous contractors who say you don't need a permit) On the day our install was scheduled, one of their helpers had an issue with his ankle on a previous job, so the owner Mike proceeded to install the entire system by himself on the hottest and most humid day of the summer (so far) without complaint. I was very pleased by his great work ethic, even with all of the rocks in my soil. He started at 8 AM , took a 30 minute lunch break and stayed until the job was done at 7:30 P.M. His plumber came by at around 1:30 to make the connection to my water line. Even after the long day, Mike spent as much time with me as I needed to show me how to operate the controller, where the heads were - and even changed a few misters out when I wanted a little more coverage in my side yard. I never felt as if he was rushing me at all. I was very, very impressed. So now it's been about 3 weeks since my install and my sprinklers are running great. I had a minor issue a few days in where the connection that the plumber made to my cold water line developed a tiny leak, but they called the plumber back to fix it at no charge. I would highlight recommend Keeping it Green to anyone considering a new sprinkler system, or someone in need of a tune up or replacement system. I look forward to working with them for many years to come to keep this system in tip-top shape. Update 9/17/2014 - I top-dressed my lawn with compost and over-seeded during the second weekend of September. I setup a new watering program on my control unit to water three times a day (Mike did a great job showing me how to do so). A week into the watering programs, I noticed there were small areas on my front and side lawns which weren't getting any coverage from the sprinklers (easy to see where the dry compost was compared to the wet). A single email to Mike and he happened to be in the area the next day to take a look. He cheerfully adjusted my sprinklers without charge.

Description of Work
Installed a 5 zone sprinkler system in our front, rear and side yards. Included a control unit and rain sensor

RR Irrigation is a reputable company that offers irrigation, landscape lighting, and landscape and roof water drainage system. RR has been offering quality services to customers since 1971. Our office staff is ready to schedule maintenance and service repairs as well as estimate for new installation from 8am till 4 pm Mon-Fri. Our fully computerized scheduler dispatches trained service technicians with all the system specifications for your system and our fully stocked trucks almost always results in your problem fixed on the spot. Our ulta efficient designs for irrigation save you money in the long run on your water bills. Our LED lighting designs save 75% in electricity and many fixtures are guaranteed for 15 years!  …

How is Keeping It Green Irrigation LLC overall rated?

Keeping It Green Irrigation LLC is currently rated 5 overall out of 5.

What days are Keeping It Green Irrigation LLC open?

What payment options does Keeping It Green Irrigation LLC provide

No, Keeping It Green Irrigation LLC does not offer free project estimates.

Does Keeping It Green Irrigation LLC offer a senior discount?

No, Keeping It Green Irrigation LLC does not offer a senior discount.

Are warranties offered by Keeping It Green Irrigation LLC?

What services does Keeping It Green Irrigation LLC offer?