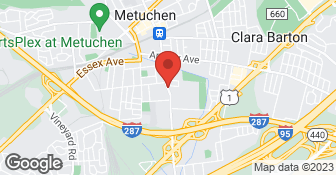 David, the owner is a FRAUD!!!! We had them come out to a business for a glass door repair, he told us we had to replace the pivot and had us pay in advance for the pivot and labor. THEY NEVER SHOWED UP TO COMPLETE THE JOB. Since 9/23/2019, David kept making excuse after excuse, kept rescheduling, until we had enough. Asked him for our money back, two days later, he had his receptionist show up with a check for the full refund and the CHECK BOUNCED!!!! Tried reaching out to him, nothing...called the office number, even the receptionist told us to press charges, as he had them in a lot of trouble and performing shady business!!! Going to the Metuchen police department tomorrow to press charges on him and his shady business!!! DON’T EVER CONTACT THIS GUY FOR BUSINESS!!!!!!

Description of Work
Repair on a glass door

Description of Work
I just purchased a sheet of glass for a window.

They messed it up and when I called them, they told me to take it too them. Although they were nice in the beginning and their prices were reasonable, I would not go back to them. He came, measured it and I showed him what I wanted. I told them the glasses were supposed to meet together but it was never resolved. I could not carry to the glasses to them because my husband was sick but they refused to come.

Description of Work
They were supposed to install 2 glasses on the dining table.

It went extremely well. It took two days to get it done. We put in the order and told him what size. It was nice having a glass place near by that did good work. They did everything I asked of them.

Description of Work
They cut a piece of glass for the top of my table.

The window was out for over two weeks, but when it came back, it fit perfectly. I was very satisfied with the work, but I thought the cost seemed a bit high. I initially had problems getting them to come out to estimate the job. They cancelled an appointment one time. However, the installation was done on a Sunday, which surprised me and was a credit to their commitment to completing the job.

Description of Work
The work was to replace double-pane insulated glass in one panel of a bow window. The panel had to be removed and taken back to their shop. I had a temporary piece of plywood place while the panel was out. I asked for a quote on mounting a piece of mirrored glass on a wall. I already had the glass. I just wanted it mounted. The quote was too high and I declined to have that done. I later did it myself.

I don't know where to start...this company was amazing from the beginning. They were so courteous and the customer service was on point. I will defiantly use them again!

Description of Work
I had 2 pieces that I needed, one was for a standard sized mirror and the other was an odd shaped piece for a unique coffee table... I had called several other glass companies in the area, all who said that they would have to order the glass and it would take longer than I had anticipated, not to mention they quoted me significantly higher prices than what I paid. For my odd shaped piece (which they said would take even longer) they said it would have to be sent out as a special order. Metuchen Glass had a ton of different sizes in stock at their shop; they were able to have everything ready that same day! They were even able to hand cut my coffee table piece! It looks beautiful, their craftsmanship is truly a work of art.

The new panel fit perfectly. Their work is excellent and timely.

Description of Work
A glass panel on my coffee table was dropped and broken... I brought the same panel from another section of the table to them and they cut a new panel to replace the broken one.

They told me they weren't sure if the mirrors could be saved, and gave me several scenarios and prices. They were able to do it for the lowest price option they had given me. They were knowledgeable, courteous and efficient.

Description of Work
Large wall mirrors were separating from wall. The men told me regluing them was not an option and nailed the mirrors into the ceiling to keep them from falling.

I took the frame in and was quoted the price based on the dimensions. I was told it would be ready in a few days (it was) and that they would call me when it was ready (they did). I picked it up the same day. I thought it was a little pricey and they didn't even wrap it up to avoid breakage in the shop or on the way home.

Description of Work
I had a very old frame that needed the mirror it held replaced.

They gave me an estimate over the phone based on my estimate of dimensions. I brought the frame in, and they gave me a revised (lower) price. They also gave me a time for finishing the job. They called me before the stated time to tell me that the work was done. The glass was well and firmly fitted in the frame, and the frame was nicely repaired.

Description of Work
They replaced a mirror glass inside a frame and fixed the frame.

Specializing in installs for roofing, siding, windows, & exteriors doors, we created our company with the philosophy of making all of our home improvement projects simple for our clients. Whether it be replacement windows, siding or entry door systems we wanted our clients to choose what options they want making the choices simple and what they want. We offer free in home estimates with simple pricing for quality products and master installations at affordable prices. Unlike other competitors who use negotiation and hard selling pricing tactics to convince you why their products are superior we offer you what you want. We will come out and show you all the products at our affordable prices. Simple.  …

Tri-State is the manufacturer and installer of premium quality vinyl windows and patio doors. We do the entire job ourselves, no subcontractor or middleman! Tri-State builds them, installs them and we guarantee them.  …

Affordable quality home remodeling with reasonable pricing, steady communication, outstanding workmanship, premium materials & extended warranties. MHRG is family owned & operated- you will work directly with an owner from the estimate process to project completion! Magnolia Home Remodeling Group offers solutions to exceed your expectations- we have an experienced team of courteous and professional installers specializing in siding (vinyl and fiber cement), shingle and flat roofing, custom-fit windows, entry and garage doors, custom kitchens and bathrooms, composite and wood decks, porches, patios, masonry (brick, stone, and pavers) and more. We also facilitate competitive, no-hassle financing – tailored to suit your home upgrade needs. Programs with flexible monthly payment plans will allow you to finance any of your home improvement projects. MHRG is committed to customer service and hope to provide 100% satisfaction to all of our clients. We respectfully ask that all homeowners be present when meeting with us for a free estimate. We feel that when researching and potentially choosing our company, allowing us to interact and provide the information to all parties works best. Our estimates are concise, descriptive, and hopefully informative! Thank you for considering us for your project and remember you will always work directly with an owner! We will work hard to earn your business and appreciate the opportunity.  …

Bonded
Insured
All statements concerning insurance, licenses, and bonds are informational only, and are self-reported. Since insurance, licenses and bonds can expire and can be cancelled, homeowners should always check such information for themselves.To find more licensing information for your state, visit our Find Licensing Requirements page.
General Information
Free Estimates
Ask for details
Eco-Friendly Accreditations
No
Payment Options
Visa, MasterCard, Discover, Check
Senior Discount
No
Emergency Service
Yes
Warranties
Ask for details

Everything and anything pertaining to glass services

METUCHEN GLASS CO is currently rated 4.5 overall out of 5.

No, METUCHEN GLASS CO does not offer free project estimates.

No, METUCHEN GLASS CO does not offer eco-friendly accreditations.

No, METUCHEN GLASS CO does not offer a senior discount.

No, METUCHEN GLASS CO does not offer warranties.

METUCHEN GLASS CO offers the following services: Everything and anything pertaining to glass services