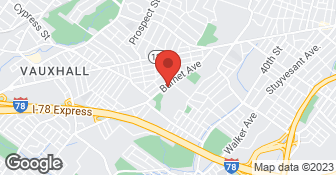 General Moving Carriers is a premier moving company committed to making your moving experience as easy and as smooth as possible. Proud member of The circle of excellence....

I didn't hire them because they estimated my move would cost $7443 to move a two bedroom condo with not much furniture and only about 20 boxes. The estimator said it would take 5 men TWELVE hours to pack my stuff up. If I had 5 old ladies we could pack it up in half that time or less. Clearly criminals!

I moved several times within Hoboken using another company. Always had some breakage, and my upright piano has a ding for each move. General Moving Carriers moved me from Hoboken to Los Angeles, including a stop in their storage and transfer to shuttle trucks on this end. Not only does my piano not have any new dings, my antique church stained glass window (about 7ft by 3ft) is not broken or even cracked. That's a miracle! The driver called me a few days before he was arriving, and showed up when he said he would. The movers on both sides were terrific - friendly and helpful. Very careful of the laminate floors in my new apartment. The estimator was very knowledgeable about the long-distance moving process, which was new to me. (I did move across country decades ago after law school, but I did that in a few UPS boxes, so not the same.) The estimate was a bit under on supplies and space, and was written in a way that was unclear to me and to the movers, so I ended up paying a bit more. Although I would have hired them if I'd known that amount up front, there's room for a bit of improvement.

They were very professional and packed our belonging in a safe manner. All furniture was neatly wrapped. At arrival at our new home they were careful unloading and put the furniture/belongings where my wife wanted them. I recommend them....

The move was perfect ! However , when tipped the foreman just looked at my husband and kept counting the money my husband ultimately gave him $100 more then he stood over me while I wrote The evaluation and told me to put an extra note on the back and stood over my shoulder while I wrote the note i will never use them again i dont sign contracts for if i help you you help me type of deal everyone else was professional and wonderful

Dear [Member Name Removed], I would like to offer my sincerest apologies on behalf of our company. Although I am very happy that the actual move itself was a success, I am saddened by the unacceptable actions of our crew member. In light of your experience, our management organized a special training session for our crew members to discuss this issue in particular. Rest assured that this type of interaction will never occur again with our company. As part of your selecting our company for your move, our customer service department is here to assist in anyway possible. we would love the opportunity to speak with you directly in order to rectify this matter. Your ultimate satisfaction with our services is of utmost importance to our company. Please feel free to contact me anytime to discuss the matter. Sincerely, Jake Dery, Managing Director General Moving Carriers, LLC (973)-761-0100 ext 101
5.0

The move itself, as organized by General Moving Carriers, was by far the least stressful part of the entire moving process! It started with an extremely thorough walk-through by Mel, who answered all of my questions over the following weeks. He explained the pricing very carefully, unlike the 3 other moving companies I met with. The front office accommodated not one but three move date changes, and then the movers themselves were incredibly efficient, careful, and friendly.

Dear Mrs. [Member Name Removed] It has been our absolute pleasure assisting you and your family with your recent relocation. On behalf of General Moving Carriers I would like to extend our best wishes. Please feel free to contact us at anytime if we can be of any assistance in the future. All the best. Sincerely, Luis Mercado Relocation Specialist General Moving Carriers, LLC
5.0

They worked hard, hard, hard. They were always polite and cheerful. They helped out in extra ways when it was not in the agreement.

Description of Work
Packed up a 2 bedroom apt and moved it 50 miles to an attic an a house.

Everything was great! just as expected.

It went well. Only shortcoming was the labeling of a number of cartons as to the most important item(s) inside. For example, boxes containing computer printers we clearly labeled and in boxes marked "electronics." The computers themselves, and a monitor, were placed in large, non-electronics boxes without any note of computer within (each would have easily fit in an "electronics" box).

Description of Work
Packed, moved and partially unpacked all my household goods. The crew were all polite, responsive and very careful - of the boxes and contents as well as of the walls and floors of both homes - the one from which we moved and the one to which we moved. The "foreman" of the crew was just terrific and kept us apprised of where they were in the process at all times.

The estimate for General Moving Carriers was high (and the final price was close to the estimate), but we chose them anyhow because they were available and they had excellent reviews on Angie?s List. However, as we later learned the hard way, General Moving will not pay out an insurance claim without a written, notarized agreement to post no negative comments or reviews about the move. We feel it is important for people to understand why there may be no negative reviews for General Moving Carriers, so we declined the meager settlement offered to us and decided to write this review instead. Our damage was due to mover stupidity rather than the normal damage that might be expected when moving a household. We had a 2? thick solid cherry dining table with 3?x3? thick legs that were permanently joined by dovetails to the top and not intended to be removed. The foreman (a genuinely nice guy) had asked if the legs could be removed and we said no. However, a junior mover with the strength of Samson broke the table trying to remove the legs. Two of the legs and a section of the table were broken off, leaving two legs attached to the rest of the table top. To their credit, the team did admit that this was their error. It took 4 weeks, but in the end General Moving offered to pay $60 since the table weighed 100 pounds. When you evaluate General Moving, be sure to consider their policy that suppresses negative reviews. And consider paying for their extra cost insurance, even if your items are unbreakable.

Description of Work
Household move from NJ to MA

Good evening Mr. [Member Name Removed], Id like to offer my apologies on behalf of our company. Although we put forth our best effort on every move, unfortunately things happen from time to time. We would greatly appreciate the opportunity to rectify this matter. Please feel free to contact us anytime as it would be our pleasure to resolve this issue. I hope that you and your family are settling in well at your new location. Sincerely, Jake Dery, General Moving Carriers, LLC
5.0

General Moving Carriers provided a great experience from start to finish. Their scheduling people were very helpful and polite, and they were able to schedule our move very quickly. They sent a team of three highly professional, skillful, polite, and careful people to wrap up our piano and move it out of our house and to our church. They arrived exactly on time and were very efficient. They were attentive to every detail and really protected the piano and our hardwood floors. Their prices were a higher than some other moving companies, but they specialize in piano moving and you can really tell by the way they handle the instrument during the moving process. It's definitely worth the peace of mind to know that they will move your piano safely and without damaging the instrument or your home. I would highly recommend their services!

Description of Work
General Moving Carriers wrapped our piano and moved it from our home to our church.

Whether it be residential or commercial, cross-town or cross-country, Monroe Moving Pros treats your things as if they were they're own. We understand that moving is one of life's most stressful yet exciting experiences, we are here to eliminate the stress and let you enjoy this very exciting time! Monroe Moving Pro offers competitive pricing and free onsite estimates as we as: -Residential Moves -Commercial Relocation -Local & Long Distance -Full Packing Services -Storage - Secure & Climate Controlled Monroe Moving Pro is Fully Licensed and Insured!  …

Mega Move is a licensed moving company that is striving its best to align its services with the highest standards of quality and trust in the industry. Being locally based, we are well positioned to help our customers with their moving needs and offer them concise and flexible solutions.Moving isn't a straightforward job. There always going to be situations beyond your control and expectations. A well sorted plan and the ability to cope with such circumstances, is what makes all the difference.People at Mega Move are experienced professionals, and have seen the bitter side of it. Their experience and cutting edge methods ensure that no matter how bad it gets, your interests remain at the forefront.  …

General Moving Carriers is currently rated 4.8 overall out of 5.

No, General Moving Carriers does not offer eco-friendly accreditations.

No, General Moving Carriers does not offer a senior discount.