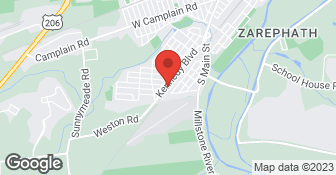 50 YEARS STRONG! In 1968 Richard J. Valenti established Valairco with the assistance of his father Joseph R. Valenti. He continues to be active in marketing and as controller of the company. His nephew Kevin J. McHugh is the current owner and will continue to offer its customers VALUE and INTEGRITY in this FAMILY OWNED business. VALAIRCO has made it their mission to provide top quality, AFFORDABLE heating and cooling services in Somerset County. Whether you need heating or air conditioning maintenance, repair or replacement, water heater replacement or new indoor air quality system installation you can always depend on FREE ESTIMATES and work performed by HIGHLY TRAINED service technicians. Named Angie’s List super service award winner for the last 4 years. COMFORT PLUS WARRANTY: All heating and air conditioning installations come complete with their exclusive comfort plus warranty program. Besides the manufacturer’s warranty Valairco extends a full 5-year warranty covering all labor and material expenses and includes 1 heating and or cooling inspection per year for the full 5-year term. VALAIRCO CARES! HELP US GIVE BACK! Valairco is celebrating 50 years and wants to give back by donating $500 to a nonprofit or charity based on the desire of its customers, friends and interested parties. Valairco will be donating to four different charities or nonprofits approximately every three months during their 50th year celebration. Anyone can nominate a charity or nonprofit of their choice by going to www.valairco.com. Once you are on the site click onto Valairco Cares and submit your nomination. Voting will cease as of April 30, 2019 for the winner of the first donation. The results will be posted on their website and everyone who voted will get an email of the results and a thank you for helping their Valairco Cares program. For more information on our Valiarco Cares program: https://drive.google.com/drive/folders/1-bIqGvig6Zhk4m03t-D6amlhrXnugEuC?usp=sharing...

25% off - Furnace or Air-Conditioner Tune-Up…

Went great. Very professional. The workers were happy and friendly. Talked to a lady on phone very professional and helpful. Also spoke with the head of company very nice got a quote quickly. And installed water heater in a few days so family didn't need take cold showers. And furnace was fix a few days later before it gets cold outside. Thank you very much William

We are so pleased to hear your comments on our service. Thank you for your review.
1.0

--Untrustworthy Company Who Refuses to Take Responsibility and Has ZERO Customer Service-- I hired Valairco to repair my HVAC's ductwork as my air return makes a loud noise. The company believed that the noise was caused by having the intake too close to the motor and offered to replace my air return duct for $2,700 (see picture). Their plan was to extend the duct and do a 180degree turn so that the air travels longer and thus can reduce the noise. I trusted them and agreed the plan due to good reviews online, a decision which I deeply regret now Although the motor noise was slightly reduced right after the installation, I started to hear slamming/banging noise whenever the HVAC was turned on/off and a high pitched noise when the system was running. Even as a non-HVAC professional, I know that this commonly indicates that the ductwork was badly designed and not properly sized to allow enough air to flow into the system. I can even visually see that the new sheet metal duct severely contracts due to lack of return air (see picture) when the system is on. I can also see small holes around connecting areas where new ducts connecting to the HVAC machine or intake vents as the crew didn't seal/insulate any of those after the installation I called the company trying to explained the issue and asked them to come fix it, but the owner (Kevin) refused and instead insisted that I pay for any additional work because he claimed that the issue was not their problem and arguing that they were just "trying to help me" as my old system was not properly designed, despite the fact that they actually removed all the old ductwork and nothings prevents them from properly sizing the new system (e.g. open new air return vent etc.). In fact, I didn't even ask them to come redesign my whole system - I simply asked them to come seal the connecting points and open a new intake vent without major changes to give it another try. Eventually, I had to pay another $~350 to have the team come over again to do exactly that (using silicone sealing the connecting points and open another air intake on the duct (see picture)) so that the system has no leak and has proper air return volume so the HVAC is not starving for air. Even the crew was sympathetic when they left the first time and thought the repair should be included (but I guessed it was not their decision) Overall, it was a very frustrating experience. I called the company dozens of times and got ghosted multiple times during the whole process starting from scheduling the first visit to the last repair and as a result the whole process lasted 6+ months (November 2020 to May 2021). The callbacks promised by the lady answering the phone were rarely followed up if any. The owner was also extremely rude and threatened to not send the crew come again if I insisted that it was their design and quality of work that caused the new problem - he just religiously believed that my old system was 100% of the issue and he, instead, just did me a favor giving it a try while charging me ~$2,700 (or ~$4, 000 in total if you add the second visit and a $~750 attic fan/ventilator that sells for $75 on Amazon) I certainly understand that there was no guarantee that the repair would solve 100% of my issue, however I would expect any decent company to take pride in their work and follow through on issues that clearly fall on their court (in this case, leaked duct and undersized system) when facing a dissatisfied customer. I was wrong making that assumption when hiring Valairco I'm still having the high pitch noise issue coming from the new ductwork as of today but I won't get back to Valairco. Whoever is reading this, please don't make the same $4,000 mistake that I made.

Thank you very much for your review. We look forward to serving you in the future.
1.0

they charged me over $500 which include nothing and was ask for more money for simple work on my furnace.. they are scam and not professional at all.. please be aware..

Although we have an excellent reputation and a significant number of positive reviews we are equally very concerned that your experience with Valairco was not up to your expectations. We hope to be able to continue communicating with you in order to reach an equitable resolution.
5.0

A/C wasn't working, I fiddled with it for a day before calling after I determined the problem was the indoor fan and wasn't the capacitor. Valairco answered my 1st phone call, scheduled someone to come between 10 and 2. Michael arrived around 10:30, diagnosed that we needed a new indoor fan blower motor quickly and left. He came back early the next morning with a replacement motor and installed it. He was polite, professional, and friendly. Working great. Total cost $450 plus tax.

We appreciate you choosing you Valairco and look forward to serving you in the future.
5.0

Technician was pleasant and was able to fix the issue

Thank you very much for your review. We look forward to serving you in the future.
5.0

I had my HVAC replaced in my condo during the summer of 2018. I had just moved and had painters working when it malfunctioned. There turned out to be a leak and I decided to purchase a new system after hearing about previous problems with the unit. I had used Valairco for annual checkups and was happy with the company. I ordered the new system requesting it be done as soon as possible because of the situation. They immediately ordered the new system and installed it as soon as it was shipped to them. Lou did a great job and I’m happy with my purchase and guarantee.

Thank you for sharing your experience with us. We look forward to serving you through our Comfort Plus Warranty Program.
4.0

So far so good, the service was professional

Thank you for your review. We look forward to serving you through our Comfort Plus Warranty Program.
5.0

Great company to deal with. They are there for you when you need them.

Thank you for your comments we look forward to serving you in the future.
5.0

This company is a class act. I was very happy with the work that they performed. It is now 2 years later and I am still so pleased with their work. Every chance I get, I tell people about what a quality job they did.

Greatly appreciate your comments. Looking forward to serving you in the future.

We do not service or install window air conditioning units.

How is Valairco overall rated?

Valairco is currently rated 4.8 overall out of 5.

What days are Valairco open?

What payment options does Valairco provide

Does Valairco offer a senior discount?

Are warranties offered by Valairco?

What services does Valairco offer?

Are there any services Valairco does not offer?

We do not service or install window air conditioning units.