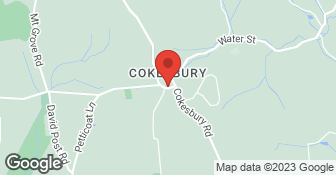 Our Somerset/Hunterdon county based remodeling company have plenty of experience for any job you may have. Our staff has 15 years of handyman experience as well as 10 years of experience installing fireplaces. MDB Construction is a fully licensed, bonded, and insured. We are willing to take on another home service repair new jersey job that someone else has started, but didn't complete. We provide services in the areas of remodeling, residential remodeling, commercial remodeling, kitchen remodeling, bathroom remodeling, basement finishing, flooring, plumbing, plumber, electrical, room additions, home remodeling, deck building, siding and much more...

D&G Excavating provides a wide range of excavating services, such as drainage, demolition, stump removal, grading, land clearing and more! We stride to go above and beyond with fair prices and great service. We are a family owned and operated business.  …

Flex Electrical is your go-to electrician in Fair Lawn. They were founded on the belief that homeowners deserve access to reliable electricians to keep their homes safe and comfortable. They offer comprehensive electrical services, including lighting installation, surge protection, wiring and rewiring, generator installation, electrical panel upgrade, outlet and switch installation, smart home system installation, and more. Each of their electricians is fully insured, bonded, and certified to perform any of your electrical services. By using state-of-the-art technology and advanced techniques, they are able to complete every job quickly with great precision and care. With Flex Electrical, you can always expect professional, uniformed electricians, fair pricing, same-day appointments, emergency service, and second-to-none electrical service. They are up to date on all security and code requirements, so you can rest easy knowing your home is safe in the hands of their professionals. Call them today to schedule an appointment.  …

We hired Mike last December as contractor. He came to work on your chimney first through thumbtack but then he told us that he was a contractor and does plumbing & flooring also.. He was very friendly & told us how long he has been in this business & what type of work He has done. Since we were getting lots of things done in our home and we really liked when we met him & he explained in details, we hired him. I did try to read reviews but most of his reviews were on amazon for small projects but he seemed very honest guy, we were happy that we found hi and could get everything done with same contractor. I did show other contractors abt projects but few of them told me that they couldn't take it bc it was big for them & couple of were busy due to holidays. First of all, on Start date of work, he showed up for few hours & I didn't like it but he assured my husband that he will finish project in timely manner & had other stuff come up. He kept adding projects on- one after another & will only come to work few hours a day??? I was getting very frustrated & after one week - he wasn't done with even 1/10 of work, he suppose to have done in that week. He had lots of excuses about everything. I wanted to fire him right away but my husband being gullible After 2 weeks of frustration, I hired one of another guy & they finished whole project in one week. Mike- did our tiles & one of the worst job someone would have done on my Botochinno Italian marble. It was a nightmare & super frustrating experience. I can't even write everything- what we both went through bc of him- makes me cry thinking about It & super upset. Hubby took two weeks off- so he can be home for project & there was nothing done- so on top of loosing money with project, he lost 2 weeks for pay. Our mistake was that we had paid him money before within few days of start of project. So many lies & excuses-- basically he is handy man & not a contractor. He used to come to work by himself when project included- taking tiles off from kitchen,bathroom- installation of tiles, making living room floor one level & installing wood, Chimney work- closing of chimney ( which is one thing he completed) & many other small things and then he kept adding projects & did horrible jobs with my kitchen - bathroom tiles...We got everything else done with my new contractor who was a God send and he didn't even ask for any money & told me that we pay them when 75% of work is done (1/2) & rest after complete work without complaints. Worst thing i did was that i Hired him AND TOP OF THIS- he will yell at my husband if he we ask him questions abt when will he finish it. lots of agony, lots of tears, loss of money & torture- my experience with this contractor-- Beware!!!!

Awesome! Mike is the best personally and professionally!

Thank you , you are always a pleasure to work with
5.0

Good. Honest guy, solid plumbing work and a fair price. Scheduling was a bit tough at times but I'd rather work with someone that's busy than not. Had a product related issue that wasn't his fault and he still came back to help no charge.

Description of Work
MDB installed a tub, a shower with plumbing and trim kit. Tiled alcove and installed recessed lights

Thank you, you were great to work for
5.0

Description of Work
plumbing project in the kitchen

Thank you, you were a pleasure to work for
1.0

I ordered a Faucet Replacement through Amazon.com services AND PRE-PAID $138.95 to Amazon for the work . They then assigned the work to MDB Construction. Amazon confirmed the appointment for Saturday 8-11. I then called Amazon when MDB didn't show up. Amazon conferenced in MDB on the phone who said they messaged me through Amazon saying they had an emergency earlier in the week and could not make it. . I just triple checked, there was no such message in the Amazon messages. They could have had Amazon cancel the appointment and assign it to another provider.

attached is the email that i sent Print all In new window Your e-mail to [Member Name Removed] Amazon.com Jan 22 to me Here is a copy of the e-mail that you sent to [Member Name Removed]. Order ID 116-2959000-4064242: 1 of Faucet Replacement Unfortunately I need to reschedule you appointment do to I have a last minute trip for a insurance company that came up, please request a reschedule appointment and put in dates that work for you When i was connected in on the call, i first talked to the customer service rep and he confirmed that the above message was sent and never viewed, then i was connected to the customer and i offered to set up a new appointment and the customer refused saying that i never contacted them that there was a problem with the appointment as you can see by above is a copy of the email sent. then i got the email that he canceled the appointment, then i got a phone call from Angie's list rep that this showed up, i was then told to write what went on and that it should be removed to to no work was preformed for the customer
2.0

When the water was turned back on, the water company checked to make sure all was ok. They detected a small leak. I kept the water turned off, and contacted Mike. He came back out, and crimped the pipe. It continued to leak when the water was turned on. He returned and taped it as a temporary fix. He said he would have to get a clamp or replace the pipe. I am still waiting for the leak to be repaired since Dec. 10, 2016. He has been contacted twice.

Description of Work
Mike replaced a water shut off valve.

when the customer contacted me i returned and tried to re-crimp the connection that was dripping. it did not work so i wrapped the connection with emergency repair tape to stop the dripping. then the customer asked if i would come back and replace the valve so we know that it was right, witch has been done since this was written. when she asked we to do the work over i told her that she needed to call the water company and set up a time for them to shut off the water again so that i can do the work, she asked if i could just turn it off and my answer was let me see if i can get a curb wrench from one of my sub contractors because i did not have one that was not the right one. so i called her back and told her that nun of my guys had one that would work, so i advised her that she needed to call the water company and set up an appointment for them to come and shut the water off again. Some time passed and she sent me a message and set up an appointment and when that time came i was there before them and when they got there they shut off the water and i cut off the old valve and crimped on the new one and they turned the water back on this time with no leaks or drip i reconnected the meter in and all was good. she thanked me and i left
3.0

Description of Work
Install fireplace insert and chimney liner. Some aspects of the insert installation they were not familiar with.

It is a unit that we do not install a lot of and we were installing it the way that we install other similar unit and the owner was not liking that so he help us find a way that would satisfy him
5.0

It went really well. Greg and Mike removed my existing cabinet and took 1/2 off the bottom. The work was neat and clean and looked fantastic - I'm not even going to have to dye the exposed edge. They then ran a water line for the refrigerator, and managed to get under my kitchen sink with me having to remove a minimum of bottles and cans from the cabinet - and I've got a lot of stuff under there. They were prompt and professional, answered all of my questions and helped me to troubleshoot an issue with my new refrigerator. They were very patient with me - and I am a 'high maintenance' personality. Their prices were fair and competitive. I would highly recommend them, and will be using them again for a number of upcoming projects in my home.

Description of Work
Greg and Mike installed a water line for my new incoming refrigerator, and removed 1/2 inch off of the bottom of a kitchen cabinet so that the refrigerator would fit.

thank you, if you needed anything please do not hesitate to ask