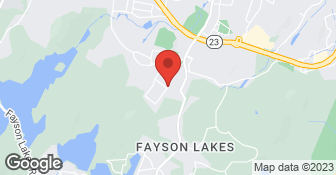 PHD Mechanical Inc is a family owned and operated company that was founded in 1990 and is serving the Kinnelon, NJ area. We are here to help you with all of your plumbing needs from emergency plumbing to water filtration systems. If you are looking for a reliable, honest and dependable plumber, look no further. Call us today to schedule your appointment....

A & O Heating and Cooling

Locally owned and operated with the owner involved in every job. We have been in business for 11 years with over 15 years experience in the industry. We are a licensed and fully insured & bonded heating and cooling contractor specializing in providing central New Jersey with new installation, repair, retrofit, and overhaul services on all makes and models of heating and cooling systems and air duct cleaning. We are committed to providing fast, reliable service to our customers, with all of our work guaranteed.  …

Great White Mechanical is one of the fastest growing HVAC Companies in the Northern NJ area. Our company gets the job done right the first time. Our service and installation teams are thorough from the beginning of the job until the end. At Great White Mechanical, we strive to uphold the highest level of satisfaction from our customers. We have the knowledge and expertise to keep our company running as effectively as possible. Our technicians have been in the business for over 25 years. We are proud of what we do!  …

Plumbing, HVAC, and electrical systems make your house livable. One minor issue with any of these systems can put your home at a standstill. In case you find yourself in this unfortunate situation, know that you can count on Gold Medal Service. For over 24 years, our company has been taking care of the homes of New Jersey residents through our top quality plumbing, HVAC, and electrical services. We are available 24 hours a day, 7 days a week to address even the most mind-boggling issues of your in-home equipment. From repairs, installations, and upgrades, our technicians are known for getting the job done right every time. We also provide upfront pricing with a full description of the service before commencing work to avoid any surprises down the line.  …

Replaced a sink faucet, contacted two others before PHD Mechanical that were reputable and this company gave me the lowest price. Services performed quickly and the gentlemen was kind and cleaned up after himself.

Description of Work
Had been trying to get to the bottom of an issue for months that I didn’t know what it was. Peter came after pipes exploded and instantly fixed it. I won’t use another plumber in nj again besides him

The first 3 plumbers came, visually looked at our basement walls and dismissed as a waterproofing issue and performed no diagnostics even after we told them this only happens when we run upstairs shower. They all kind of brushed us aside like we were crazy and had no idea what we were talking about. Pete from phd came and listened to us and actually investigated fully with so much persistence. Ran a camera and after several efforts to find this mysterious leak, he was able to pinpoint it. Was corroded pipes that were under the foundation and several small leaks along the shower line down to those pipes. The water was actually getting to our foundation and essentially causing seepage and the sewer gas smell. He had the decency to run through different options that could save us money while still preventing future issues. He was so determined to help us that he even came by on his day off at no charge just to investigate what was causing the issue. Really great company and pete + son pete were professional, diligent, kind and fast! I'm telling you ...don't go with anyone else until you call this guy first.

Description of Work
Sewer gas smell and basement walls leaking water. Root cause from a difficult to find leak starting from second floor shower. Needed someone to locate the leak.

For both issues they brought in other guys to make sure it was done right. I'm very happy with their work.