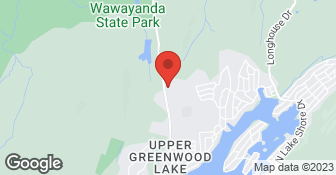 We are the only tree care company you'll ever need! We know you'll come back to us for all of your arboreal needs because we're that confident in the quality of our work. Specializing in tree and stump removal, we are a full-service tree care company offering a wide variety of services, including pruning, planting and fertilization. Proper care is necessary to keep your trees and shrubs looking their best; that's why we only hire experienced, qualified professionals and will never send you an untrained landscaper. We are certified, licensed and insured, and fully committed to providing quality without compromise in all services. So whether you job is big or small, residential or commercial, simple or complex, count on us to complete the work on time, within budget, and to your complete satisfaction. For more information or to receive a free price quote, please contact us today....

We contacted Acorn in the Fall to get an estimate for some limb removal, after a few bad storms left large branches in our backyard. They did the estimate and we had a date set up, then they had to cancel, due to a storm in the area causing them to have to respond quickly to an emergency situation and we were not as much of a priority. I understood this completely. Then, we had to cancel, because I was home with a 4 month old and I did not want them to be here when she was, and have them disrupt her sleep. We told them we'd call back to schedule in the spring. We did so, then they continued to cancel on us three MORE times. Once, because of vehicle failure. Once because of storms in the area again. Now, over the summer, I'm a teacher, I sent my daughter to daycare so that she wouldn't be disrupted as they worked. I return from dropping her off to find out they cancelled at the very last minute. They called at 8:08, to tell us their climber was sick, and their other crew was already set up at a different location. They were supposed to be here around 8:00. They cost me daycare fees, they were totally unapologetic on the phone with my husband. I called them as well to lodge a complaint and Linda was also extremely unapologetic to me. I told her this was the third cancellation and was unacceptable, but she basically responded with, "what do you want me to do about it?" I know other people have had good service from them. I'm thinking that because we were a small job they continually put us on the backburner. I am extremely frustrated with not only the inconvenience they caused but also their nonchalant attitude about the situation. I DO NOT recommend them.

Description of Work
We wanted them to remove some of the limbs from a tree in our backyard. What did they actually do? Nothing besides an estimate.

A phone call to the company after normal business hours was answered by one of the partners of the company. She came the next day to give me an estimate of the work to be done, and sent me an email with a copy of her insurance certificate that same day. Two weeks later, her workers came at the agreed upon time on both days, and removed trees with a minimum of damage to lawn and surrounding trees.Very professional work. Would recommend them to anyone needing tree service.

Description of Work
Removed 7 trees from property, and trimmed one tree.

Description of Work
Did not respond

He was very good.

She was expensive, but good. The tree landed on my truck and my roof. They had to lift the tree off of my truck and the roof. She was quick efficient and fast. They did no more damage than they had too. I would use them again.

Description of Work
Acorn Tree & Crane Service removed a tree off my truck and roof after hurricane Sandy.

She was condescending....I felt patronized....moreover, she proposed to leave part of a tree and have it carve into a bear

Description of Work
I did not hire her

They called me when they were at my neighbors house because I had a tree leaning on an electrical wire. They said they were next door and would do it for me right then. They did, and I thought they did a good job.

Description of Work
They cut down a tree in my back yard that was leaning on an electrical wire.

THEY CAME WHEN THEY SAID THEY WERE GOING TO COME. THEY DID THE WORK WITHIN THE DAY, AND THE TREE WAS GONE. THE PEOPLE WERE VERY PROFESSIONAL, VERY NICE AND KNEW WHAT THEY WERE DOING.

Description of Work
THEY REMOVED A PINE TREE FROM THE FRONT OF THE HOUSE.

COVID-19 UPDATE: Under the NJ Governor's Executive Order, tree service work is still continuing Tree Care and Tree Work can continue under the Governor’s Executive Order as long as tree care businesses and licensees follow social distancing recommendations. We are fully operational and will continue to provide quality tree care services as long as we can ensure the health and safety of our employees and customers.  We have put together procedures to minimize the spread of the disease based on guidance from the Center for Disease Control, the NJ Board of Tree Experts, and the Tree Care Industry Association.  1. Employees will conduct all possible services equipped with gloves. 2. Vehicles will be disinfected daily. 3. Employees will wash hands between jobs. 4. Employees will attempt to maintain a physical distance of 6 feet when possible and avoid unnecessary person to person contact. 5. If you have a service scheduled and develop possible COVID-19 symptoms, please alert us so that we can reschedule. 6. If any of our employees have become exposed to COVID we will enact a self-quarantine. 7. The office staff is working remotely for the most part but will be available 24/7 for emergencies and “office hours” remain the same. O'brothers Tree Service LLC is dedicated to providing a safe workplace for our employees and ensuring the safety of our customers. It is our hope that in doing our part to prevent the spread of COVID-19, New Jersey will experience as little disruption as possible, our community will remain healthy, and that COVID-19 will become a thing of the past.  We will continue to monitor the situation and provide updates as needed.  Wishing our employees and customers health and safety over the coming weeks, Our Company provides you with quality and affordable tree service solutions. We take great pride in delivering efficient, timely, reasonably priced, and professional tree removal service. We are a family-owned and operated tree company committed to excellent service and superior customer care. When you need reliable, affordable, and prompt assistance, all you have to do is give us a call! Call us today for more information or TEXT at 201 899 1229. We are looking forward to the opportunity of working with you. Give Us A Call Today 201 338 2637.  …

Bonded
Insured
All statements concerning insurance, licenses, and bonds are informational only, and are self-reported. Since insurance, licenses and bonds can expire and can be cancelled, homeowners should always check such information for themselves.To find more licensing information for your state, visit our Find Licensing Requirements page.
General Information
Free Estimates
Ask for details
Eco-Friendly Accreditations
No
Payment Options
Check
Senior Discount
No
Emergency Service
Yes
Warranties
Ask for details

Acorn Tree & Service Inc is currently rated 4.6 overall out of 5.

No, Acorn Tree & Service Inc does not offer eco-friendly accreditations.

No, Acorn Tree & Service Inc does not offer a senior discount.

No, Acorn Tree & Service Inc does not offer warranties.