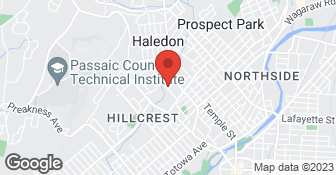 I was looking to have the stairs in the back of my home replaced. I called a few masons and lo and behold when I got home I found a mason's truck in front of my house doing a job in the neighborhood. I called the number on the truck and got the owner Joseph George. He was very nice and said he would send someone over. So his guy Clayton shows up and he seemed very nice. Gives me a bid for between $3,000 and $3,500 for the stairs. Then recommends that I should reseal my driveway. I hadn't thought about it but he said he had "extra material and he could do it cheap". He said $400 and I got him down to $300. He told me he was going to do the same job for a neighbor for $700, please don't tell them what I was paying he tells me. He said that it would look great, they would fill in all the cracks and blow the debris off the driveway prior to doing the job. He calls me back about an hour later that his boss Josef George said they should use fresh material and could they come back Wednesday. Sure I said. I waited for their call that they were coming and it never came. I ran some errands and then my mother in law who is 83 calls me in a panic. Some guys showed up to do the driveway and they wanted her to pay $475. I get the guy on the phone and he says I should get 2 coats and it will be $475. I said we agreed on $300. He says fine but I am only getting one coat. I asked him how long it would take and he said he would be done in 15 minutes and I could bring the "cash " to his job site down the street. I thought that 15 minutes did not seem like enough time to do the job. I get home and the job was a joke. There was bare spots all over the driveway , they never cleaned the driveway and debris and leaves were just covered over in the tar, the cracks were never filled either. It was a hack job. I called the number for Joseph George the owner. I told him my concerns hoping they could fix the issues. He got angry, nasty and started cursing. He told me to "accept the job as his gift and never ever call him again." Now I am being treated like the crook. 15 minutes later his son shows up, also a Joseph. I told him what just transpired and he say, "Yeah my Dad is a nasty angry guy. Don't start with him." I show him my concerns and he gives me some sob story how the sealing was his job and he's out money. I give him $150 and he says that Clayton will be back to fill in the cracks because they don't even do that normally since it will come out in 3 months (mind you my last guy sealed some cracks and it had lasted 2 years). I gave them the money because I don't need their charity or their guilt. Stay away from these guys. Beware the name Joseph George. He apparently had another Paving and Masonry business called AFFORABLE ALWAYS PAVING AND MASONRY. Here is the link to the lawsuit from the New Jersey Attorney General. Same guy different company. Their cards look like they were done at home on a computer. http://njconsumeraffairs.gov/press/pdf/always102705.pdf BEWARE!!

Description of Work
I asked for a bid for concrete stairs in the back of my house and his sales guy recommended that I should reseal my driveway. I hadn't thought about it but he said he had "extra material and he could do it cheap". He said $400 and I got him down to $300. He told me he was going to do the same job for a neighbor for $700, please don't tell them what I was paying.

Classical Pavers serves both New Jersey and New York in the Tri-state area. We are masonry contractor company that specializes in the installation of outdoor living areas including paver driveways, walkways, patios, steps, stoops, retaining walls, culture stone, and fire pits. We are fully insured.  …

How is Best New Jersey paving and masonry overall rated?

Best New Jersey paving and masonry is currently rated 1 overall out of 5.

What days are Best New Jersey paving and masonry open?

No, Best New Jersey paving and masonry does not offer eco-friendly accreditations.

No, Best New Jersey paving and masonry does not offer a senior discount.

Are warranties offered by Best New Jersey paving and masonry?

No, Best New Jersey paving and masonry does not offer warranties.

What services does Best New Jersey paving and masonry offer?