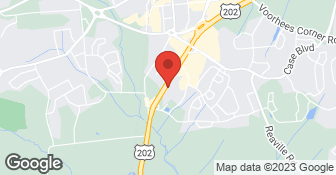 Well, to give you an idea, we gave them the first payment on September 26, 2014. They finished the job today, April 23, 2015. They kept making and breaking appointments to install the fireplace, and twice sent out crews who were unable to do the job. They finally subcontracted it to a guy who knew what he was doing, but they never followed up with him about subsequent work that had to be done, including installing the chimney cap. We got the subcontractor's number and starting calling him ourselves, and then things would happen. His name is Bob and his number is 609-306-1732. I would suggest calling him directly if you want a fireplace installed.

Description of Work
We bought a gas fireplace from them, and paid to have it installed in our traditional wood burning fireplace box. Included a new chimney.

Product and installation were great, but it ends there. Before my pellet stove was installed I called to inquire about the compatibility of a programable thermostat I wanted to purchase. Sue assured me it would work without asking any questions about it. When I asked to speak to someone else, she refused. It was only after calling one of their competitors that I was told this particular thermostat wouldn't work due to a voltage differential. Another problem I encountered was when I purchased a ton of pellets (50 bags) from Tim. Tim assured me that I did NOT have to take delivery of the entire ton and that I could come by and take as many bags as needed until I reached my full amount. This was a serious concern for me as I have no basement, shed or garage to store 50 40lb bags. I took 8 bags with me that day. When I returned for some more, Tim told me he is not in the pellet storage business and that I already paid for my bags and should take them all. I currently have bags of pellets stacked up in my living room and kitchen. I was left feeling that after they got my money, I was swept under the rug.

Description of Work
I purchased a pellet stove, had it installed and also purchased a ton of pellets from the Wood Heat in Easton, PA.

Their products are good (better than most you see around) as is the installation work. Be prepared to do all your own leg work when it comes to permits, inspections, etc.. and do not expect any help from these guys should you have issues.

Description of Work
Purchased a wood burning insert from Wood Heat in Flemington. Product line and selection was very good and the basic "in store" explanation of features and functions was good as well. Product delivery and installation was fine as well; on time and as promised. I have basically two problems with these folks.. 1) You are left entirely on your own to get permits, arrange inspections and deal with any issues which fall out of the inspection process. In our case Wood Heat sold us metal/fiber floor "mat" which was supposed to be acceptable from a building code point of view... Wrongo!! 2) Post sale and installation these guys do not respond to your calls. I went after them for the floor mat issue but could never get them to return a call.. Bottom line, I dealt with it myself.

I would highly recommend Wood Heat if you are looking to install a wood stove in your house. They made the whole process of selecting a stove so easy and it was great not having to hire a 3rd party to perform the installation.

Description of Work
I recently purchased (11/20110) a wood pellet stove from Wood Heat in Flemington, NJ. June Kellogg @ Wood Heat was very knowledgeable about the installation and features of the various wood stoves. We choose a pellet stove from Quadra-Fire. June was great to work with, she answered all our questions and let us take our time in deciding which stove to have installed in our house. Wood Heat was great, they did all the work, they filed the building permit with our town, they delivered and installed the stove according to code on the date scheduled.

It all began when I walked into the Woodheat store in Flemington, NJ in September 2010. I was greeted promptly by a sales representative who was very informed and helped me chose what I wanted. After I chose what I wanted I paid for it and scheduled an install date with Bob (the store manager). I do a lot of traveling for work so it was important for me to stick to an arranged schedule. Well about 2 days before the scheduled install I get a call from Bob saying the installers have an opening and he would like to do it today. I was really caught off guard but the fact that I would get it earlier was appealing so I arranged to work from home that day. Bob also scheduled to looked at the job (actually I asked him to come look at it, it was not offered) and "scope it out" prior to sending his installers to do the job. He came over and lets just say he made A LOT of promises that didn't pan out in the end. One being that his installers would be able to hide the power cord coming from the unit another being that the sheetmetal surround for the unit would be flush with the existing masonry. He also said that the chimney would have to be swept prior to install but that if I threw the installers a $50 that they would do it rather me paying a chimney sweep $100. This really concentred me because I just spent over $4000 on the unit and install, you think they would throw that in, but they did not. The installers came and installed the unit. The install went fairly smooth except the fireplace surround was not sitting properly on the rock masonry that was around my existing fireplace. It just didn't look right. There were gaps all around the edge where the surround would meet the masonry. It looked awful. So I called Bob the next day to take care of it. He scheduled a visit that he missed. They rescheduled another visit that he didn't make. Finally he made it back to the house (called me on his way over so almost unannounced) and he brought clear silicone caulk and proceeded to fill these HUGE holes with it. Keep in mind that the aluminum surround is black and the masonry is gray. Again it looked AWFUL and as soon as I lit the next fire the caulk came off the masonry and it looked even worse. I called Bob yet again and asked him to come up with a solution. He said he would have a surround specially made for me and it would take time. That was in January 2011 and he never game me an anticipated completion date so as time went on and 3 months passed I figure I should give him a call in March. He said the surround was in (I am sure it had been in for a while) and he would send someone right over to put it on. In Jan of 2011 I tried to reach the company owner of the company Todd Ackerman on his cell phone to express my concerns about the install services. I called and left a few voice mails and never received a call back. So I called their second store location and asked if the owner was available and that person just suggested I call management back in Flemington location. I was just handed off in a circle of phone calls and voice mails with no concern from the owners. Todd knew he had a concerned costumer who was leaving him voice mails and never attempted to call me. Bottom line is when Bob did his initial walk through of the project he made a lot of promises and made me believe the end result would of been much more visually pleasing. Also they were very sporadic with their scheduling. I don't see how you can hire someone to manager a store who has no capacity to schedule around his costumers. There were a couple times where I took off work only to have him reschedule. Bob consistently seemed frazzled and unorganized. So while Wood Heat sells good products they really need to reconsider who is managing their Flemington store. I have learned to live with the final result, but it was not nearly as nice as was promised. If you do purchase from them I suggest you go outside for an installer. Oh and the "install team" was Bob's brother, talk about all hands in the pot.

Description of Work
I purchased a wood burning fireplace insert from Woodheat in Flemington NJ. They also offer install services so I took advantage of that as well. Before the install the installers cleaned the chimney. Then they installed a chimney liner and cap that was required for the insert. After that they installed the unit in my existing fireplace which included an sheetmetal surround. While the fireplace I purchased is a quality unit, my issues were with the install of the unit.

Alfano Mechanical has been serving the community for over 43 years!! We take pride in having the lowest rate in the industry at only $85 an Hour. We NEVER charge you for Travel, Overtime, Holiday or Emergency!! Alfano Mechanical services all of Northern New Jersey for Residential and Commercial Refrigeration, Heating and Cooling. Our main priority is to ensure our customers needs are taken care of with the utmost professional and caring manor!!  …

We are a BPI Building Performance Institute Accredted Plumbing and HVAC company, We are licensed plumbers and I am a certified plumbing instructor and fire inspector I also have 2 Backflow testing certifiactions. We do the highest quality residential and commercial work with my highly trained staff. I am the past president of the N.J. State league of Master plumbers for 2010-2011  …

The Speer family started their company in 1900 selling coal and oil to residents and businesses in Northern New Jersey. Speer Air Conditioning was formed in 1958 and incorporated in 1966. Since then Speer Air has attained a reputation as one of the top heating and air conditioning companies in New Jersey. We average between 35 and 50 employees seasonally. We are a Carrier Factory Authorized Dealer (FAD) and have a New Jersey Home Improvement Contractor's license, 13VH00978100 as well as a New Jersey Electrical license, 14873. We provide complete HVAC services as well as electrical services. Speer Air is also a Generac Home Stand-by generator dealer. We also will give a $100 discount in addition to Speer Air discounts and the many utility rebate programs that are available. We look forward to serving you and offer a 100% satisfaction guarantee .  …

Insured
All statements concerning insurance, licenses, and bonds are informational only, and are self-reported. Since insurance, licenses and bonds can expire and can be cancelled, homeowners should always check such information for themselves.To find more licensing information for your state, visit our Find Licensing Requirements page.
General Information
Free Estimates
No
Eco-Friendly Accreditations
No
Payment Options
Visa, MasterCard, American Express, Discover, Financing Available, Check
Senior Discount
No
Warranties
Yes

The area's largest provider of wood, pellet, gas, and coal, stoves, fireplaces and fireplace inserts, to home owners and home builders, since 1975.

How is Wood Heat overall rated?

Wood Heat is currently rated 3.4 overall out of 5.

What days are Wood Heat open?

No, Wood Heat does not offer free project estimates.

No, Wood Heat does not offer eco-friendly accreditations.

No, Wood Heat does not offer a senior discount.

Are warranties offered by Wood Heat?

What services does Wood Heat offer?