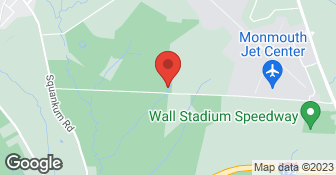 If you are looking for a top rated roofing company with decades of experience and thousands of installed roof references, we are the company for you! We are licensed in New Jersey, New York and Pennsylvania. Most of the roofs we install can be replaced in 1 day and within 1 week from the day that you approve our estimate. Our specialty is residential roof replacement. We offer 18 month no interest financing for those who qualify. We will give all Angie's List members a $250.00 discount*. Additional phone numbers -(888) 333-4272, (732) 625-2424, (732) 842-8900, (732) 256-9741. Only 1 discount may be used per customer. Discounts cannot be combined. Additional DBA - Redline Enterprises LLC....

We have over 9 years of experience. Currently servicing the Monmouth, Middlesex, and Ocean Counties. We are fully insured and specialize in the following services; Brick Pavers for Walkways and Stairs Belgian Block for Driveways and Planting Beds Retaining Walls Paver Repairs - Restoration and Sealing, Asphalt Sealcoating, Landscaping, Property Cleanups, Concrete Demolition, Asphalt Repair and much more! Call us today to learn more about our services and get a FREE estimate!!!  …

Shore Points Carpentry is a BBB Member with an 'A' rating. Shore Points offers financing and accepts Visa and Master Card. All estimates are in writing with a warranty attached. Installers of the best rated roofing, siding and windows in the United States which gives the homeowner the very best protection available anywhere. References are promptly and gladly furnished. Free estimates. Shore Points carries insurance. Specialists in roofing and siding repairs- Residential and commercial.  …

Mac’s Construction is a family-owned and operated business with local ties to the community. We are dedicated to helping Brooklawn, New Jersey, and our surrounding communities grow in every way. Mac’s Construction hires well-rounded craftsmen who are skilled in roofing, siding, windows, doors, decks, flooring, kitchen installation, etc. If you are in need of our building services, we take calls 24/7 and pride ourselves on being available as much as possible to our clientele. Call us today at 856.449.3709 for a free estimate.  …

very well. it has been over 6 months since the job was done and everything still looks in good shape.

My experience with Fortified Roofing was outstanding. Fortified Roofing installed my new roof a couple years ago and they did an amazing job. They were quick, clean and gave a very reasonable price. They also offered a great warranty. The roof looks amazing. Last winter I noticed I was getting a leak in my attic around the chimney. I called Fortified to report the problem, they came out immediately and inspected the attic and decide to reflash my chimney at no charge. A few weeks later I notice I was still getting water in my attic. I called Fortified back and they immediately came out again and this time they peeled back the new shingles and installed an ice guard, replaced some plywood and re shingled, again at no charge. It turns out the leak was coming from the chimney and I needed to have my chimney rebuilt by a separate company, Fortified offered to reflash the new chimney once it was installed, again at no charge. I was blown away on how considerate and personal my house felt to the staff and crew. John and Joy were an absolute pleasure to deal with. I didn’t feel like a customer I felt like a close friend. Fortified roofing went above and beyond, and I would highly recommend them! 5 stars! -Dave

very well. they showed up very early on the day of work and worked until done. Work site was clean after the work is done just like the job never took place. I hope there is no issue with the roof. but have to give these guys 2 thumbs up.

Great price. Professional. Did a great job cleaning up after the installation

Job was done in one day which is great.

The contractor was prompt in responding to my inquiry but unfortunately responded that they do not provide a roof repair service. My overall rating reflects the fact that they had an excellent response, but could not help me, so their overall rating is fair.

Work done well, but I thought it was a bit sloppy. Worker's try to clean up after the tarp wasn't secure as old shingles came down, so did the tarp.

This has to be the most stressful and aggravating job we have ever paid for. They were quick to send some one and give us a quote. However they never kept an appointment after that. They scheduled the first crew between 7 and 8 in the morning. No one showed up. When I called I was told that they had cancelled the job because it was too hot. Granted it was but when you cancelled the job did you think you would call me? Within half and hour they dropped the shingles on the waters picket and broke it. I had to wait a week for that to get fixed. We were originally told that the gutters would be installed within one or two days. They never mentioned that the job was subcontracted. We received a call that the next crew would come a week later between 9 and 5. They never showed up. No phone call. Finally they showed up the following day. The most disappointing thing is that when you look at the shingles they look old. The roof doesn't look new or flat. They claim that it will flatten out within a couple of months. One can only pray that this will happen and that the fumes from the tar that have infiltrated my home go away!

They were excellent. Don’t hesitate hiring these roofers.

Thank you so much for leaving us this nice review!