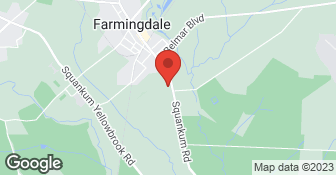 Specializing in speedy, comprehensive appliance repairs at a great price, Express Appliance Service, LLC, is here to get your home's appliances back in peak condition. We serve homeowners across East Brunswick and environs, and we're committed to ensuring your oven repair, dishwasher repair, or other service is done both quickly and correctly!...

These reviews almost scared me away and I’m so glad I didn’t let them! I was assigned this company threw my home owners warranty and of course looked them up and saw some not so good reviews and was worried. But, to my surprise having my washer repaired by express appliances went very well. When I called and spoke with the office staff to schedule my appointment I was a little upset that they couldn’t send someone out for 3 days (because it was Friday) but I took the first available appointment . The night before my Tuesday morning appointment I received a reminder message and about 35 mins prior to my appointment I received another message telling me the technicians name and that he was on his way. The technician took his time to look at my washer and explained exactly what was wrong and told me he was going to have to parts ordered and sent directly to me. When I received my parts (2 days later) I called the office to schedule another visit to have my parts installed. Thankfully some of there technicians were running some overtime and I was on the schedule the next day and my washer was back up and running! Honestly I was a little upset that it took a week but I do understand why, especially because I was kept informed threw the whole process! I also understand that their truck stock can only hold basic universal parts due to the amount of different brands and style appliances. All in all it was a great experience and I would use express appliances again without a doubt!

The technician did not know how to repair unit. He said he would call it in and have someone come out who knew the product (Miele). No one called! the worst!!!

My dryer and stove top have been broken since July 3rd , my home warrenty company sent out express appliances for repairs. Today is August 15th and still both don’t work. I have tried to stay patient but today was the end. I had my 5th or 6th tech out on the 11th of aug had all the parts that were again shipped to me. Took the whole dryer apart and opened the box and said oh no they shipped the wrong part. Ok so I never heard from the company and called today. I asked when I would receive the new part . The girl said oh you already did on aug 2nd. I explained that was the wrong part and asked to speak to a manager. I got Tara, a very rude girl who said she was the office manager. She was giving me attitude so I asked for someone above her. She said only the owner was but he doesn’t talk to customers! So there you have it, wow, all I can say is steer clear of this company they are the worst

Badly...took diagnosis fee and said he would let me know what parts I would need. SCREWED ME Never called back, wouldn't return phone calls, Scumbag

They did not fix our problem and provided very poor service. They put us on hold and gave us excuses for 2 months, and I found similar experiences to ours on google.

Description of Work
I called them for oven repair.

They came out, evaluated and ordered parts. They came back to fix it once the parts arrived. The price was reasonable.

Description of Work
The computer board broke in my refrigerator.

They needed to repair the refrigerator 4 times before concluding that I needed a new one. The worst problem was that they have no one but the technicians to answer the phone. So I always leave a message and wait a day or two before getting a return call.

I disliked them extremely. It was their lack of communication. They came out and replaced a seal on my refrigerator, and then I had to hunt them down to have them come back out, because the refrigerator was still making noise. It took from October to February for them to come out and replace three parts. I tried to contact the owner of the company for follow-up and no phone calls back. The owner did not call me until American Home Owners Shield called him. The guy that came out and did the work was very pleasant. The work that they did was good.

Description of Work
I did used Express Appliance Repair to replace a seal on my refrigerator.

I called on Saturday. He offered to come out that day, but it was not convenient for us. He then offered to come out the next day in the morning, which was Super Bowl Sunday. He arrived on schedule, finished both jobs within one hour and obviously knew exactly what he was doing. He told us that he had a 2 year guaranty on his work - parts and labor. I should also mention that we asked a local retail appliance store for a quote. They said it would be $125.00 per job just for an estimate, and that they would apply the cost of the estimate to the work if they performed it. They did not say that they would refund the difference if the actual charges were less than the estimate, so it would have cost a minimum of $110 more than what we paid. This contractor is insured, and takes major bank credit cards or checks.

Air duct, dryer vent, chimney cleaning, repair, and installation. Over 10 years experience. Powerful air tools, equipment and professional technicians will be provided during the service. Do not hesitate to contact and get your home evaluation. By owner operator. Please call me at 201-554-5859  …

We have been delivering exceptional, Same-Day appliance repair services since 1983. Our goal is to consistently provide excellent customer service, while getting your appliances repaired quickly so that you can get back to enjoying your life. I, Bill Cummins Guarantee it! Our Certified technicians are among the best trained and most professional in the industry. Our support staff oversees communication and will facilitate the entire process to get your repairs completed quickly. Appliance Master takes advantage of the latest technology available and reinvented the way we do business. As a result, we continue to provide excellent customer service, as reflected by our customer’s feedback and continued growth.  …

Insured
All statements concerning insurance, licenses, and bonds are informational only, and are self-reported. Since insurance, licenses and bonds can expire and can be cancelled, homeowners should always check such information for themselves.To find more licensing information for your state, visit our Find Licensing Requirements page.
General Information
Free Estimates
No
Eco-Friendly Accreditations
No
Payment Options
Visa, MasterCard, Check
Senior Discount
Yes
Warranties
Yes

Express Appliance Repair is currently rated 2.6 overall out of 5.

No, Express Appliance Repair does not offer free project estimates.

No, Express Appliance Repair does not offer eco-friendly accreditations.

No, Express Appliance Repair does not offer a senior discount.

Are there any services Express Appliance Repair does not offer?