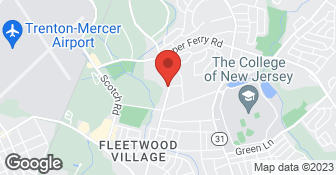 Everything went as planned he came for the estimate appt on time and completed the work when he said he would. I am the owner of multiple properties from atllantic county up to hunterdon county and jim has done all of my roofing and siding work for the past 15 years. He is a very honorable buisnessman if there has ever been an issue he would always make it right and I look forward to continuing our relationship for years to come.

Description of Work
put roofs on three of my homes

We were very pleased. They cleaned up very well. They were very aware of the problems we had before and made sure to correct those issues. The owner was here numerous times throughout the process to check on his crew. They were very much on top of things. If they had any questions they were always apt on asking my husband or checking with the owner before doing any work.

Description of Work
They replaced the roof and made little repairs where necessary with new boards.

IT WENT GREAT. THIS COMPANY AND THE PEOPLE THAT I WAS INVOLVED WITH WERE AWESOME! CALLED THEM FRIDAY AFTERNOON, SAID THEY WOULD BE HERE BETWEEN 11 AND 12 O'CLOCK ON SATURDAY AND THEY WERE. THIS IS A BIG PLUS FOR ME AND ONE OF THE WAYS I JUDGE PEOPLE WHO ARE PERFORMING A SERVICE, PUNCTUALITY. THEY RECOMMENDED AND ARRANGED AN ELECTRICIAN FOR ME TO TAKE THE WIRES FROM ONE OF THE MASTS WITH A BAD FLASHING. THEY CAME MONDAY MORNING TO START THE JOB, HAD THE ELECTRICIAN ARRANGED FOR THEN ALSO AND EVERYTHING RAN LIKE CLOCKWORK! THEIR WORK IS IMPECCABLE AND I WOULD DEFINITELY RECOMMEND THEM TO ANYONE THAT NEEDS ANY TYPE OF ROOFING, SIDING, GUTTER SERVICE, ETC. ANY ADVICE THEY GIVE YOU IS HONEST AND TO THE POINT AND THERE IS NO COERCING YOU INTO DOING ANYTHING YOU ARE NOT SURE OF. THEY ARE DIFINETLY HERE TO DO A JOB AND TO HELP! A GREAT COMPANY!!!!

Description of Work
CLEANED MOSS AND ALGAE OFF MY ROOF. FIXED 4 FLASHINGS ON THE ROOF, TWO OF WHICH WERE CAUSING LEAKS. FOUND A LEAK THAT I HAD FOR MONTHS THAT OTHER "PROFESSIONALS" DID NOT EVEN TRY TO FIND THE LEAK BY GOING ON THE ROOF. THAT WAS THE FIRST THING JIM DID, AND THE LEAK WAS FOUND.

Jim Novak and his crew were puntual and very professional. They completed job in 2 days. Price was excellent and quality great. Jim Novak came right back when I called him to inspect area of roof where prior roofing professionals had severe problems managing complexity of roofing job needed. Jim immediately makde repairs needed and corrected issues inside home also. Jim proved to be extremely honest and stands behind his work and his company. I would highly recommend him for roofing jobs- big or small easy or complex.

Things could not have gone better on any of the things that Ameri-We-Can did for us. We purchased an old, dilapidated farmhouse with a large barn and some outbuildings in 2012. It took us a lot of work to renovate the property. At each stage, we interviewed multiple contractors. Some contractors we hired were good, some were not. Ameri-We-Can stood out as exceptional, which is what prompted me to write this review. When interviewing roofing contractors for the garage and barn roof, Ameri-We-Can had the best price by a significant margin. At first, we were wondering how they could be so much lower than the other quotes, so we interviewed Jim Novak on the details of the proposal. He had all the facts ready, down to the smallest details. Hired! When it came time to do the work, Jim showed up on time with a highly skilled crew. They completed the work on-time and to a standard of perfection. There were no mistakes. The equipment he used ensured that the job was done quickly and safely. There were two funny things that I remember about this job (Jim has done multiple jobs for us since). First, we had the roof done in October 2012. Given the large size of the roof, Jim suggested that it might be a good idea to use extra strong hurricane straps. Less than two weeks after the job was completed, Hurricane Sandy came through and destroyed many roofs - but not ours! I did not consider this in advance, but Jim did. Second, for a long time, our property had a lot of construction activity going on. On a regular basis, we would have to scan the ground for nails or other sharp objects that could damage a tire - or a foot. Jim's crew did such a spectacular job on cleanup that his areas were cleaner after the job than before! I never found even one nail left behind. I think Jim saw that we were struggling with the scope of the project that we had taken on, so he went out of his way to connect us with good resources for other parts of our project. He also followed up a few times after the work was completed to make sure that we were satisfied and that there were no issues that he could help us with. I would, and do, recommend Ameri-We-Can very highly.

Description of Work
We have had Ameri-We-Can Roofing and Siding do a number of jobs for us. They completely rebuilt our barn roof, installed gutters on our house and barn, helped us with some carpentry projects and other things.

With almost 20 years of professional experience, we are here to address all your remodeling and other needs and dreams you may have. We do plumbing, HVAC, carpentry, electrical and more.  …

Bonded
Insured
All statements concerning insurance, licenses, and bonds are informational only, and are self-reported. Since insurance, licenses and bonds can expire and can be cancelled, homeowners should always check such information for themselves.To find more licensing information for your state, visit our Find Licensing Requirements page.
General Information
Free Estimates
Ask for details
Eco-Friendly Accreditations
Yes
Payment Options
Check
Warranties
Ask for details

How is Ameri-We-Can overall rated?

Ameri-We-Can is currently rated 5 overall out of 5.

What days are Ameri-We-Can open?

What payment options does Ameri-We-Can provide

No, Ameri-We-Can does not offer free project estimates.

Are warranties offered by Ameri-We-Can?

No, Ameri-We-Can does not offer warranties.

What services does Ameri-We-Can offer?