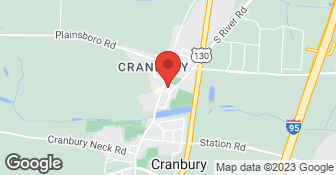 While investigating some water damage, we opened up the drywall and found a slow leak in a copper solder joint in the water line. We called Herr's Monday morning, and they were able to come to the house the same day. (After some back and forth on a few phone calls about the exact time. They sent someone as soon as they were finished with the current job, but were not able to say when that would be on the first call.) Two people arrived. Replaced the joint, including the line to the sink, and hooked everything back up in 20 minutes. They left the job site clean and two weeks later we have no problems. Overall and excellent job.

Description of Work
Needed a ball valve replaced in my toilet. Guy he sent very efficient, in the house literally 10 minutes. Cost was $100 and I supplied the replacement piece. Not vey likely I would recommend or use again.

I KNOW THE OWNER OF THIS COMPANY. I AM VERY SATISFIED WITH THE WORK THAT HE DOES. HE DOES A GREAT JOB WITH HIS WORK AND IS VERY EXPERIENCED WITH WHAT HE DOES.

Description of Work
THEY DID SOME PLUMBING REPAIRS.

Plumbing, HVAC, and electrical systems make your house livable. One minor issue with any of these systems can put your home at a standstill. In case you find yourself in this unfortunate situation, know that you can count on Gold Medal Service. For over 24 years, our company has been taking care of the homes of New Jersey residents through our top quality plumbing, HVAC, and electrical services. We are available 24 hours a day, 7 days a week to address even the most mind-boggling issues of your in-home equipment. From repairs, installations, and upgrades, our technicians are known for getting the job done right every time. We also provide upfront pricing with a full description of the service before commencing work to avoid any surprises down the line.  …

We specialize in boilers and Radiant heat, and we do everything from new home installations of plumbing and HVAC systems all the way down to service work, drain cleaning and water heaters.  …

How is Herrs Plumbing And Heating Inc overall rated?

Herrs Plumbing And Heating Inc is currently rated 4 overall out of 5.

What days are Herrs Plumbing And Heating Inc open?

What payment options does Herrs Plumbing And Heating Inc provide

Does Herrs Plumbing And Heating Inc offer a senior discount?

No, Herrs Plumbing And Heating Inc does not offer a senior discount.

Are warranties offered by Herrs Plumbing And Heating Inc?

No, Herrs Plumbing And Heating Inc does not offer warranties.

What services does Herrs Plumbing And Heating Inc offer?