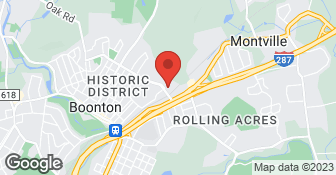 For over 20 years we’ve been helping the community of New Jersey to obtain and achieve the necessary quality working over their improvement projects. Garcia’s Construction and Design Inc is a company that is willing to assist you with hard workmanship and diligence to attend all the specifications and demands you might have regarding your home or commercial project.  …

They come four times a month to cut the grass. I don't call them, it is scheduled. I was satisfied. The major work they did for me, landscaping my front lawn, I had a couple of trees uprooted by Hurricane Sandy and the lawn was a mess. They put it back together and filled the holes made by the trees. They cleaned it up. It was fine. They did the work very professionally.

Description of Work
I use a company called Bednar Landscape Services to take care of my lawn and clean up during the spring and fall seasons. They fertilize my lawn, trees and shrubs and mulch the flower beds.

I don't call them. It's scheduled and they come and visit periodically. They schedule in advance at the beginning of the year and hey come without any invitation. They did major work for me landscaping my front lawn. I had a couple of trees that had been uprooted by Sandy and the lawn was a mess and together they filled the holes and cleaned it up so I was pretty satisfied. The cost was kind of steep but storms like Sandy don't happen everyday but they did the work very professionally.

They did the job. Unfortunately they arrived much later than expected. We had used this firm for both general landscaping (cutting grass, etc) and bigger jobs. For cutting grass they were always on time as expected. For other things like cutting bushes once or twice a year they always came more than a week after they were expected.

Description of Work
Cut down bushes that were getting too tall.

We are very happy with the services provided by Bednar.

Description of Work
Bednar Landscaping has been our contractor for several years. The have done plantings, landscaping and provide weekly lawn maintenance. We are very satisfied with their services and professionalism

Unable to enter review for BEDNAR LANDSCAPE SERVICES no comments or description given.

We had Bednar redo our entire front yard landscaping - adding trees, bushes and flowers, while also using some of the existing plants my husband and I planted on our own. We paid about $2200 for the job, which also included them sprucing up a holly in our yard. In the 6 weeks since they did the job, they have had to come out four times already. Four of the plants they planted died. They planted the tiniest shrubs against the foundation of the house which looked so unattractive, that they had to come back and replace them. Why they thought 2 foot plants would work well for a home in front of basement window and white foundation, I don't know. We hired them to make it look pretty, not crappy. They came to replace the dead plants which were under warranty and didn't even spruce up the mulch, leaves or other gardening debris. You'd think they'd want a customer to come home to a nice, tidy landscape,especially after all these issues, but I guess not. They also killed one of our original plants when they came to put in the new shrubs by ripping it right out of the ground. I was standing there when they did it. The owner then tried to low ball me on the refund for it until I showed him my receipt which he was good for. They're good with replacing the plants, but that was a guarantee in our contract, so it's not like they did us any favors. And it was such a hassle following up with them and sending them pictures of dead plants, etc. After doing such a poor job the first four times, we're moving on.

I am frankly ecstatic about Keith and Pete and the work they did, and to be fair I am not the easiest guy to please. They showed up on time, they did what they were supposed to do, they didn't cheat or skimp on anything, and they cleaned up when they were done. The quality of materials was excellent. The 6-7' trees I ordered was what I actually got. In the past with other contractors that is not always the case. The topsoil was of very high quality, as was the mulch. Simply no complaints. The workers were friendly, there were no communications problems, and they didn't leave cigarette butts and water bottles all over my property as with some other contractors. Keith is a guy who obviously knows his business. Of the three bids I got, he was the only one who proposed to put the rocks in front of the trees on my very steep incline. These rocks are more like small boulders and they have the effect of leveling out the planting area. I have no idea how the other guys were going to plant their trees on that hill without them falling over, or leaving the front of the root ball bare. When I mentioned this to one of the other contractors who had bid the job, he said "oh yeah, that might be a good idea" and all of a sudden his bid was nearly the same as Keith's. What you get with these guys is not just labor, it's the ability to solve problems that the other guys don't think about. I think they call this "experience". Having just finished a large retaining wall installation that was done by a "contractor from h***", it makes we wish I had used Keith and Pete for that job too. So, what's the downside? As with all things, you get what you pay for. Bednar is not the lowest bid, though the difference is not huge, maybe 10%. But quality - and honesty - costs money. in the past I chose a couple of contractors based on price and I soon found out that a low price equal shoddy work, sub-standard material, "cheating" (like leaving out the stuff that you can't see), and poorly performing contractors. In the end I often ended up paying more than the original bid price anyway. The thing with Bednar is that they don't play you. They are honest, they do what they say they are going to do, when they say they will do it. You get a real quote and that's the price you pay. If they say it's going to cost $800, that's what it costs. No "negotiations" or "adjustments" at the end of the job like the joker who built my retaining wall. I would use these guys again in a second. You should, too. And no, he's not my brother-in-law or anything :-)

Description of Work
We recently replaced a large retaining wall and we were left with a bare hill that was about 150 feet wide and 25 feet deep. Keith proposed to put thirteen (13) Blue Spruce trees on the hill, size 6-7 ft. each. The hill is steep so Keith also proposed to put a half ring of large rocks in front of each tree to hold the soil and level out the planting area. He came by early on the expected day and went over in detail where the trees would go, marking each location with orange marking paint so there would be no confusion. His crew removed the landscape (weed mat) fabric, dug the holes, and planted the trees. They used a mix of natural soil and topsoil that was of very good quality and which contained lots of organics. Once the trees were planted, they replaced the landscape fabric and applied approximately 15 cu yards of brown double ground hardwood mulch on the hill. The next part of the job was to repair the lawn. The back yard was left in extremely poor condition by the contractor that built the wall (but who had been paid to fix the lawn when they were done). That contractor was Global Contracting of Andover NJ, but that's another long, sad story. So I contracted Keith to rake out the rocks, level the moon-like surface, and put down a couple inches of topsoil, starter fertilizer, grass seed, and salt hay. In total that work took a crew of 3-4 two days. Once that was done I had them come back to put Belgian Block at the end of the driveway where it meets the back yard, since the RR ties that used to be there were removed by the retaining wall contractor and never replaced. About 32 feet of block was installed. That work took a crew of 2-3 one day.

Our yard was quite neglected after not having been professionally landscaped for over a year. My husband had cut the grass, but was not cleaning out the beds or weeding/trimming. We had another company provide a quote three times the quote provided by Bednar. They communicated via email (a huge plus for us) and showed up when they said they would. They did an AMAZING job on our challenging yard.

I am very happy with their landscape work.