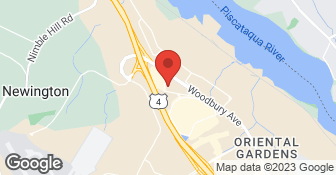 Description of Work
Total kitchen remodel. Could not have done the design and input without the efforts of Sharon Tully. Excellent help and support. Coordination of project was difficult, but I believe that particular part was out of her hands. We are very happy with the kitchen overall! We would qualify our answer "use this provider in the future" There should be a choice for indicating "other"!! We definitely would hire Adaptations again for a project, if coordination, communication with areas of construction were improved. |

Description of Work
They renovated a 7'x7' bathroom that was torn down to the studs (walls, ceiling, and floor) prior to their arrival. The job was quoted as 19 days on the calendar, but took approximately 3+ months. The subcontactors' work was satisfactory, the supervision and General Contracting of Adaptations Unlimited was lacking and I often found myself reporting problems to them that they were unaware of. At one point, after 10 days of no work accomplished, I called to inquire and was told that they were waiting for a city plumbing inspection, to which I pointed out that the plumbing was not even complete so how could it be inspected--Adaptations Unlimited had no idea the plumbing was not complete. The price, which I find to be extremely high, excludes electric which I contracted to someone else.

Description of Work
Kitchen remodel. Staff conflicts with each other felt like working with a dysfuctional family. Many management issues. I would never recommend this company.

It is very hurtful to receive a review like this. With all due respect to the client, we completed the job, perfectly in every way. One product she ordered was defective and the manufacturer replaced it and we reinstalled it. This was a January 2012 Job. This is the first we are hearing of any dissatisfaction form this client. I believe that this review from a job 32 month old, is inaccurate and completely unfair. I hope to get a phone call from this client so we can meet and discuss this review. It is bad enough to have to write off bad debt at the end of a job, To get an unfair review more than two and a half years later is adding insult to injury.. We chose
1.0

Description of Work
Still haven't gotten back to me with quote. If I don't get in touch with the designer, she seems to forget about me. She had some great ideas, but I never even got the plans I paid for.

When [member name removed] and I met my understanding was that she was not ready to proceed with the bath remodel project and would let me know when she was. As soon as I received this, I contacted her and have fullfilled her request for the design for the master bath and apologized for any misunderstanding on my end. I would love to remodel her bath when she is ready to proceed and would be happy to put together quotes for her at that time. Thank you
3.0

Salesman was initially polite and asked what we wanted to do. As we were explaining that he interupted to tell us that we shouldn't do that, and started to tell us why not. We were interested in his advice but not pleased with not at least hearing us out. That happened several times through out the discussion. He did offer some constructive advice but the experience still left us uneasy. We had to email repeatedly to get a response and quote. Once we got that we called back to discuss the details and asked if we could get an itemized quote to understand the pricing and adjust if needed. He said he wouldn't do that. After we pressed he did agree to do it but we never heard back from him. We started looking for other options at that point.

ransactions with themrI wish to submit A retraction of my previous review. It was a case of mistaken Idenitiy.I sincerly appologise to this company and truly regret the mistake I made.I can' say anything more about them because we never conducted any transactions with them. Again my Appologies to this firm and I regret any difficulties I may have caused. PAUL SHEA

Description of Work
They did not perform any services

Description of Work
Adaptations Unlimited did a design consultation. It was a big deal purchase.

Description of Work
I bought a Big Deal from them for a kitchen or bathroom design consultation with floor plans.

Description of Work
They provided a plan for refurbishing our bathroom. A consultant came to the house and measured the space. 2 weeks later we went to the showroom where we could select materials. We've decided to wait until the summer to complete the project. $45 was the price for the consultation and planning.

They were courteous and friendly. However, when they provided us the proposed contract for the construction of our home addition their cost was almost twice what we anticipated based on multiple other vendor estimates. Despite our asking for alternatives for various items (heating, insulation, windows, etc) none were provided. Their work was lacking in detail as to cost elements and left out many areas of additional cost to us. While we learned more about the construction process for the room addition the end product did not in any measure fulfill our needs. Our cost in time and energy working with them far exceeded the benefit. Their end product (construction proposal) was inadequate. Although inter personally they were nice and knowledgeable people, I could not in good conscience recommend their services.

Overall we couldn't be happier with our new kitchen. I honestly wouldn't change a thing. The team at Adaptations was very professional and walked us through some exceptional design schemes. We have a relatively small kitchen but they came up with a design that completely maximized the space and functionality. The main installer was very friendly and had a meticulous attention to detail. The quality of the cabinets are very solid and we have had no issues since our new kitchen was installed over a year ago.

Description of Work
Adaptations Unlimited remodeled our kitchen from start to finish. This included drawing up the design, removal of old cabinets and appliances and installation of new cabinets, appliances and the detailed finish work.

I met with Stephen, the owner of the company who took care of me personally. I explained what I was looking for and he visited my home to measure the next day. He was very professional, listened carefully and attentively and responded with a kitchen design that more than fulfilled my desires in style and quality...at a reasonable price. The demolition and construction work was done in a very timely and professional manner. When we changed some things in the middle of the job, change orders were executed promptly and reasonably. The job was completed on time. The work was always professional and high quality.

They planned the work, with a working budget. They performed as planned and to budget. When walls were opened, some unexpected issues and challenges came up. They were dealt with efficiently, economically, and professionally. I am delighted with the work, the professionalism, and the budgetary responsibility they showed

Description of Work
I purchased a bank owned singlr family. It was a disaster and needed to be totally gutted and rehabbed I went to Adaptations Unlimited because I learned that they had done a number of similar jobs and had a great reputation, earned over 32 years..They came up with a cost effective plan including adding a second story with two full bedrooms, dorma storage and a full bath. The first floor was gutted and completely rebuilt with new electrical, new plumbing and a new roof and a new full bath with laundry. New windows were installed and everything was brought to code. The outside was redone in vinyl siding. A new high efficiency heating system was installed. I now have a brand new house on a 100 year old foundation

Description of Work
We've just started the process of the remodeling job. Still determining scope of work. Owner, Steve Kniaz, has been very responsive to our requests.

Went very well. Our salesperson/designer helped us create a custom plan for the remodel. She was very knowledgeable about the details of the lines of products they sell. She was able to suggest a set of products in our target price range that went together very well. She was able to quickly answer detailed questions on each product or she would find out the answers. Once we settled on a design, she coordinated the install. She communicated very well with us so we knew what was going on and how we could help. ( The install was in our second home which is an hour+ away from where we live during the workweek.) And she made sure the details of the install went well (permits, product delivery to our home, arrival of installers.) The installers did a great job, paying close attention to the details. And the finished product reflects their high standards. They were attentive to dirt/dust control and our carpets still looked good after the install. We plan to update the other full bath in our place and will visit Adaptations Unlimited first.

Fully insured tile contractor with combined 20 years of experience. Owner operated business that will always be on the job site. Specializing in ceramic, porcelain, mosaic, glass, and natural stone. We can do anything from basic floors to high end custom shower stalls. Using an artistic approach we make each job special for the customer. We are professional, efficient, and have competitive pricing.  …

Insured
All statements concerning insurance, licenses, and bonds are informational only, and are self-reported. Since insurance, licenses and bonds can expire and can be cancelled, homeowners should always check such information for themselves.To find more licensing information for your state, visit our Find Licensing Requirements page.
General Information
Free Estimates
Ask for Details
Eco-Friendly Accreditations
Yes
Payment Options
Check, Visa, MasterCard, Discover
Senior Discount
No
Warranties
Ask for details

How is Adaptations Unlimited overall rated?

Adaptations Unlimited is currently rated 4.3 overall out of 5.

What days are Adaptations Unlimited open?

No, Adaptations Unlimited does not offer a senior discount.

Are warranties offered by Adaptations Unlimited?

No, Adaptations Unlimited does not offer warranties.

What services does Adaptations Unlimited offer?