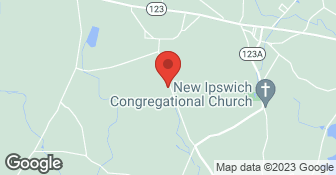 It went well. Bill is a professional who prefers to do it right rather than fast and cheap.

Description of Work
They dug out the foundation for addition on house, poured foundation and coordinated with other contractors, and extended driveway.

A couple of years ago, we had another excavator dig up and windrow stumps on 13 acres that had been previously logged. This summer we hired Bill to dispose of the literally thousands of stumps. Some of the stumps were too big and heavy for me to pick up with my heavy-duty skid steer. Bill was pro-active and interested enough to walk the site even before we met him to talk about the work. Bill worked hard and diligently to get the job done. The job turned out to be more difficult than expected due to the boulders that made burying the stumps difficult and it turned out he had actually underbid the job. When we tried to give him more money, he refused and insisted on sticking with the bid price. That’s pretty rare. Bill had noticed some issues with drainage on our long, steep, rough driveway, and suggested some actions we might take. He did such a great job with the stumps, we asked him to do whatever he thought the driveway needed. He made major improvements, and refined his plans several times to ensure the best result possible. We were happy with the driveway, so we asked Bill to prepare a packed floor for a tractor barn we were going to build. He made good suggestions, kept an eye on costs, and suggested and built a great extension of the driveway to the barn site that has worked out really well. I cannot emphasize enough what a pleasure it has been to work with Bill. He is honest to a fault, friendly, and easy to work with. He works hard and works smart. We would not hesitate to hire him again for any excavation or land-clearing tasks. In fact, we hope to have him do the excavation and site work when we build a house. He is worth every penny. We trust him completely.

Description of Work
Disposed of 13 acres of big stumps from a logging operation. Dug ditches, improved drainage, and other roadwork on half-mile driveway. Prepared packed floor for barn and built driveway extension to it.

Spoke with Bill and determined the date for work. Bill was on time and all the work was done perfectly. He not only provided sand, but also some loam to cover up the site. Everything was done to our complete satisfaction and we will definitely recommend and use his services again in the future.

Description of Work
Needed to have a trench dug for a new gas line installation for a generator, filled with rock sand

I highly recommend this contractor. I did not grade his cost because I didn't get competing bids (and therefore have no frame of reference), but I'm very happy with what he did and how he did it, so the value to me was excellent. His estimate was for $1600 and he stuck to that, except for the cost of some gravel after I agreed to get it: he charged me only what the gravel cost him. I called Bill and he came down the same day. He gave me an estimate, I accepted, and he did the work the next day. First they tore out the asphalt and trucked it away. It was pretty tight and he had to be very careful not to hit the house, garage, and granite wall, all of which form the driveway borders, but Bill did a great job at keeping it safe and avoiding any and quot;oops.and quot; Before removing the dirt/sand, he suggested (since the driveway was not flat) I get some stone dust and granite chips (I think it's called crusher run) to prevent runoff when it rained. I agreed, and he had his truck driver pick up a load after dropping off the dirt. After removing the excess dirt, Bill spread the gravel with the backhoe/digger and used his tamping machine to pack it down. He told me he'd take about an hour to pack it down, but he was actually out there for at least two and maybe three hours, just making sure that it was really packed down firmly. He did this extra work for free, even though he hadn't included it in the original estimate. The only added charge was for the cost of the gravel material, which was exactly what he'd paid (he gave me the receipt from the supplier). In my opinion, he did much more than he had promised and never asked for a penny more.

Description of Work
Job: Removal and disposal of existing asphalt driveway and some underlying dirt. Driveway is about 70 x 10 feet. My driveway is fairly steep, which makes it troublesome in the winter. Making things worse was a hump about halfway up, so getting to the top was difficult when it was slippery. I plan to repave it after lowering the overall level and in particular removing the hump.

Bill gave me an estimate the day after I called and did the work a week later. He keep me informed throughout the job and made some great suggestions. The final bill was the same as the estimate. I am completely satisfied with his work.

Bill had excellent communication and all of his work is exceptional. He is quality conscious.

Description of Work
He used his excavator and backhoe and helped me build an outdoor hot tub retaining wall and pad.

I discovered my livestock area inundated with water from torrential downpours blocked by the previous days snow fall. Bill responded in less than 20 minutes to assess the situation. He returned within less than 1 to 1 1/2 hours with his equipment in miserable weather conditions and within less than 3 hrs had the water flowing away from the barn. It would have been easy to charge an exorbitant amount for this service considering the conditions. He did not choose to take that advantage.

Description of Work
We had a emergency situation involving flooding into a barn area. Bill responded within about an hour with equipment to unblock the snow pack and trench the area which allowed the water to drain away.

We are a fully insured growing excavation company in southern NH. We specialize in house lots, additions, barn/garage slabs, drainage systems, yard reclamation, land reshaping, stumping, tree removal, utility trenching and house demo. 22 years of experience. we take pride in our work and try to satisfy the customer beyond expectation on every job.  …

Kucharski Tree Care Professionals, LLC is the leading provider for all your tree and shrub care needs. Our team cares about trees and takes pride in our craft. We are committed to preserving the health, safety, and appearance of your property. Our highly trained arborists utilize the latest and most effective techniques to ensure job safety and overall performance. We understand you value your home. We know that trees work to improve our environment and quality of life, so let’s take care of them.  …

Specializing in hauling! We always guarantee your satisfaction and won’t leave until the job is done right. We take pride in ourselves and on the quality work we provide, while always delivering great customer service! Check out our services offered, then call --or-- click to schedule a free estimate today!  …

Bill Hakala Contracting LLC is currently rated 5 overall out of 5.

No, Bill Hakala Contracting LLC does not offer eco-friendly accreditations.

No, Bill Hakala Contracting LLC does not offer a senior discount.