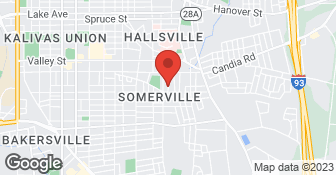 We were very pleased with Kevin's work. The new floors looked fabulous. The sanded floors, which had been neglected for years, came to life! Kevin was punctual, polite, and professional. I received several bids and Kevin's was the lowest. He also had terrific suggestions for how to reduce the scope of the living room work. I highly recommend Kevin and I would definitely use him again.

Showed up on time, did work exactly as described in the time frame we agreed. Very good quality, good clean up. Made one repair at no cost, and another at a very reasonable price.

Description of Work
Sanded and refinished hardwood with 3 coats poly in 3 rooms.

The results were just mediocre. They did a good job of patching in new wood in a couple of areas but the refinishing results were less than we had hoped for. We did ask for a satin finish but it really lacked luster. We wound up having to apply wax and re-apply as needed to keep any sort of shine on the floor. I wouldn't use them again.

Work was performed between tenants in a rental house. They were able to fit the work into their schedule on short notice, so it was done quickly and fit in between tenants. They used old boards to match the old flooring, so that you cannot tell that a section of the wood floor was pulled up and replaced. I was very happy with the results - the floors look great!

Provider did not have wood.

They did exactly what they said they would do and where very flexible when we added an additional room to the project. My only disappointment was that the refinished floors did not come out as nice as the installed hardwood. However the kitchen floors originally were a prefinished maple and they look a lot better now than they did originally.

Excellent work, beyond our expectation. Floors were in very bad shape and Manchester Wood Floor brought them back to life. We will use them again in the future

Description of Work
Refinish over 1400 square feet of pine floor

Description of Work
Refinished whole first floor birch floors. Price was about $2000 less than the other bid I received. Everything went very smoothly and professionally. My only complaint is that the work was literally a little "rough around the edges". There were rough spots at door jams, next to the fridge, and at floor edges and some uneven areas in the hall. However, The rough spots were not enough so that I would not make the same choice to use this contractor again.

Description of Work
Refinished floors in 3 rooms and in closets. There wasn't much furniture to move since I was about to sell the house but they didn't charge any extra to move what was there. I live over an hour from the property so I appreciated the flexible schedule.

They did a beautiful job. After seeing one bad repair (a section of plywood) and poor transitions from the dining room to the two living rooms, Kevin told me he had some old maple in his barn that he thought would match my floors, and for an extra $400 I told him to please PLEASE repair them. The results are amazing--the floors are the highlight of the house now. The wood matched perfectly. Before talking with Kevin, I interviewed three other people who all told me the pine floors were a lost cause and that I should just either paint them or preferably cover them with other flooring or carpeting. When I told Kevin I just wanted them sanded lightly so I could paint them, he actually looked hurt that I would suggest such a thing. And after explaining that he had done many pine floors in the same condition as mine and they they turned out great, I happily decided he was the one for the job. Kevin and his men were quite punctual, and the couple of times they were going to be delayed, Kevin called to let me know when to expect them. All of them were respectful of me and the house, and they left it in much better condition than they found it! They started the job June 2nd and finished on June 8th, coming in on Sunday to put on the last coat of poly. I would call Kevin again in a heartbeat if I needed floors refinished. Besides doing the best job, he gave me the lowest price.

Description of Work
Kevin and his men sanded and put four coats of poly on all the maple and pine floors in an old home I just purchased. These rooms included a large dining room, two living rooms (all maple), and three bedrooms, a large pantry and two large walk-in closets (all wide pine)--approx. 2000 sq.ft. altogether.

Fantastic!!! They were very punctual everyday, always communicated with me, and the job was completed on time.

Description of Work
Refinished all the hardwood floors on the first floor, 3 sets of staircases, and an upstairs hallway.

With a 120 year old house and original maple floors, it was important for us to have them restored. Kevin and his son Johnathon are both extremely professional and knowledgeable in their profession. They were very respectful of my home. They made sure doors and furniture were protected, they even plasticed up and moved my full size oak pool table to get the job done right. They were on time every morning and got right to work. They replaced many floor boards, and took time each day to walk around the home and ensure we were happy with each step of the process. Every time I walk down my stairs - I smile!

Description of Work
Refinished 3 halls, 2 rooms and stair threads, including replacement of boards.

Description of Work
Removed rugs, refinished and installed oak flooring in place of rugs. The provider applied adhesive directly to concrete foundation, and due to temperature fluctuations and humidity, the wood expanded and the floor buckled in several places.

This was the second floor we had them install in about a month. I met with the owner Kevin and after talking to him we decided to hire him after he suggested that the best way to go about his was for me to go out and find my best deal on the flooring and he would handle the install. So he didn't make a dime on the materials. He and his Team focus all their efforts on installation. I scheduled the first floor and wanted to see how they did before I had them do the second. Needless to say we were pleased. We went to Lumber Liquidators and bought their Builders Pride. The second grade just below the top. Great deal. But not until we had the Bellawood installed on the second floor did we realize the difference. Kevin and his Team did a masterful job with what they had to work with. He had told us ahead of time to buy the Bellawood Select but we didn't. And any issues we may with the floor are related to the wood itself. Because when we took his advice and bought the Bellawood Select for the second floor, what a difference. We thought the first one was beautiful, but when we saw the second one. We learned what the difference was between the top grade and the next down. We still love both, but this Bellawood Select is incredible. As far as the install goes. I've seen those videos on installing floors yourself. They make it look easy. But when you watch true Professionals like Kevin's Team do their work, you realize the difference. These guys are artists to say the least. And they are meticulous. I mean, they give a new meaning to the word Professional. And they do not give up until the job is perfect and you are satisfied. I've had friends and relatives install their own flooring. If you take a look at their floor and mine, you can tell the difference. Kevin and his Team (John and Elvis) are worth every single penny they make. We have several more floors we plan to have installed in the future, and Kevin and his Team will definitely be the ones we hire! John in Deerfield

Description of Work
Installed about 800 sq ft of wood flooring.

Kevin, the owner of this company, has consistently done an excellent job whenever we have needed help pertaining to hardwood flooring. We have hired him on several occasions now going back several years, and he has the expertise and experience required to handle any job. He has completely redone the flooring in two houses for us, and we always receive glowing comments on the floors,even some time (years) after they've been done. His estimates are always extremely competitive, and his work is fantastic. He has done refinishing(both light and heavy-duty sanding),patching,wood staircases, thresholds, fabrication, even installation of wainscoting in the bathroom-all flawless, top notch work! Kevin has consistently gone that "extra mile" for us, and we couldn't be happier with this company.

We specialize in wall and floor covering, such as painting, tiling, hardwood floor and finish basements. We have been in this industry for over 60 years my background is interior design were it comes handy when choosing materials and colors. We are owner operated business.  …

With over 18 years of experience, Queen City Floors would love to show you what type of craftsmanship can be accomplished through the service that is offered! We strive to help customers to fall in love with their floors again. Whether that may be through refinishing and sanding your current floors or installing new hardwood floors! Trained by one of the best floor specialists that the New Hampshire area has ever experienced, Queen City Floors offers products that have a high attention to detail while providing a quality product that can be enjoyed for years to come. From pickling or staining a floor and using some of the best finishes In the industry to installing a sound product into your home, Queen City Floors truly adds to the value and integrity of your home!  …

Insured
All statements concerning insurance, licenses, and bonds are informational only, and are self-reported. Since insurance, licenses and bonds can expire and can be cancelled, homeowners should always check such information for themselves.To find more licensing information for your state, visit our Find Licensing Requirements page.
General Information
Free Estimates
Yes
Eco-Friendly Accreditations
No
Payment Options
Check
Senior Discount
.05
Warranties
No

Manchester Wood Floors is currently rated 4.6 overall out of 5.

No, Manchester Wood Floors does not offer eco-friendly accreditations.

No, Manchester Wood Floors does not offer a senior discount.

No, Manchester Wood Floors does not offer warranties.

Are there any services Manchester Wood Floors does not offer?