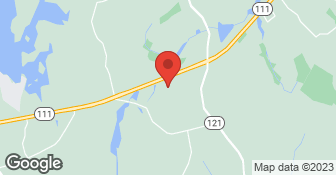 Traynor Glass Co has been proudly serving our customers sinces 1978. We are a complete Commercial, Residential, Garage Door, and Auto Glass Service facility....

Dennis from Traynor arrived promptly and within minutes told us exactly what the problem was and fixed it within a half hour as well as adding handles to the doors so that if it happened again, which he assured us it wouldn't, we could more easily open the doors. Excellent service and value.

Description of Work
Our garage door opener was not working consistently.

Chris is Matt's brother and I lucked out getting him for the install, which he performed exceptionally well. Not only was he a great guy to chat with and learn from but his attention to detail was meticulous. I knew I had a good company when they walked in with blankets and a vacuum cleaner, even though I already had both prepositioned. Chris has been doing installs for about 30 years and has the old school craftsman's philosophy: he is there until the job is completed correctly. This was evident when the mirror was a little too large and he had to take it back to the shop to grind some off on a Fri afternoon. Chris not only cleaned up as he went but he also offered to clean up for his predecessors! He treats your place like his place, not like it was just another job. The only challenge I encountered was on getting a contract signed after Matt estimated the job. Matt provided a detailed quote with images so you could visualize what you'd get, unlike some other companies. Matt came out personally and took very careful measurements but then I had some Professional Building Services (my General Contractor (GC)) timeline and scheduling challenges after the GC had to have several call backs to correct deficiencies. This was not Matt's fault but I did have to follow up with Matt several times. I was wondering what the service and end result would be if I found Traynor unresponsive as a prospective client, which is arguably the client base they are most responsive to. My concerns proven unfounded. Bottom line is that these guys did an exceptional job and the end result is certainly the best part of my new bathroom.

My neighbor found this company and had them do some work. While the work was going on next door, the supervisor came over to my house to get an idea about what the job would involve, take measurements and give a preliminary estimate of cost. They called a few days later to get more info on the skylights (to make sure of proper fit). I gave them a deposit and the replacement panes were ordered. They gave me an idea of how long it would take to get the materials...warned me it would take a couple of weeks since it was a special order. Once the panes came in, I was contacted to set up an install date. They came when they said they were going to (a BIG plus in my book) and gave me an idea of how the job would proceed. I was curious about the whole "how window panes get replaced" process and the crew was happy to answer all my questions. The skylights were partially disassembled to get to the glass part. The glass and frame were lowered to the deck so the crew could work on them. They removed the two moveable window pieces of the double-hung windows so they could work on them on a portable bench they brought. They warned me that with the double-hung windows, that broken glass was highly likely (and it did happen). It was all tedious and meticulous work, but they all seemed to know this was the nature of the work. They completely cleaned up after themselves. Once they were gone, the only trace that they had been there was the sparkling new panes in the windows and skylights. The only reason I gave a B rating to the price (rather than an A) is that they were the only quote I got, so I don't have anything to compare it with...but the price seemed fair considering the labor involved. One thing that stood out for me about this company was they kept me informed every step of the way. I didn't have to hound them for information or nag them to put me on their work schedule (as I often have to with other service companies). I highly recommend this company.

Description of Work
Replaced double-paned glass that had lost their seal. Three skylights (one pane each) and 2 double-hung windows (4 panes each).

I have a yearly contract with Traynor for garage door maintenance and I couldn't be more pleased with the service. The owner was here within 20 minutes and was able to free up the door.

Description of Work
Freed garage door because it froze and I could not open it.

Matt came out and looked at the job shortly after we contacted them, gave us a firm quote and described the work to be done. We had a slightly larger shower opening than is typical but they were able to come up with a good solution. The installer was very professional, didn't rush and did an excellent job. A few missteps in the ordering process but I believe they were the fault of the door supplier, not this company. I would definitely use them again and I'm happy to recommend them to others.

Description of Work
Installed a new glass shower door in a renovated bathroom.

After a horrible experience with the obnoxious owner at Northlite Glass in Derry I went onto Angie's list and found Traynor. They were so nice and professional and after examining the piece that had to be replaced quoted me a price half of what Northlite was demanding. The piece was ready when they promised it would be and the workmanship was excellent. This vanity mirror piece is one of 6 panes and you cannot even tell which was the repaired piece and which are the original ones. I will go back to them for all my future glass needs.

Description of Work
Replaced the glass for a vanity mirror.

My contractor removed the glass from the panel and delivered the door and old panel to them and picked up and reinstalled the new when completed. Traynor did an excellent job replacing the glass within the time frame and cost they quoted. The result was I got an updated shower door for my renovated bathroom at less than half the cost of replacing the entire door.

They were wonderful. I had them last year and I liked them. They were scheduled for today and one man came. I love their company. They tell me who is coming and tell me when they are coming. They are very prompt and very professional. They just do a good job. In the end, they told me stuff that I could do on my own like how to set my remote. Nobody has done that before for me like changing batteries, so I was very pleased. I haven't contacted any other company for the price. They are not the company who installed it for me as that company has closed. I had some emergency, so they came immediately. I tried them again because I had some problem.

Description of Work
Traynor Glass Co serviced both the bays on the garage doors as one of the doors was not working properly.

We had to reschedule installation a couple of times -- once at their request, once at mine. They arrived for appointment when promised and completed work in professional and timely manner. Mirror and installation were both high quality. Their price beat competitor.

Very professional and friendly. Had to order part as they do not keep part in stock for the type of door I have, however, convenience, professionalism and courtesy more than out weighed any inconvenience caused by waiting for the part to come in. Most likely a customer for life.

We offer Commercial Glazing and Storefront service, Residential Glazing services including glass, mirror, screen repair, replacement windows and much more, We are a proud Garaga Overhead Door Distributor and service facility. WeE are the very best at auto glass replacement from your 1955 Chevy to your brand new Corvette

Traynor Glass Co. Inc is currently rated 4.9 overall out of 5.

Traynor Glass Co. Inc offers the following services: We offer Commercial Glazing and Storefront service, Residential Glazing services including glass, mirror, screen repair, replacement windows and much more, We are a proud Garaga Overhead Door Distributor and service facility. WeE are the very best at auto glass replacement from your 1955 Chevy to your brand new Corvette