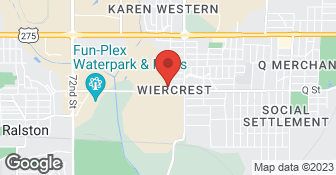 Are you looking to add privacy and security to your property or enhance the beauty and value of your home? Let Advantage Fencing of Omaha help. Whether you want something traditional such as a wood or vinyl fence or a unique product to accentuate the landscaping and motif of your home or business such as a wrought iron or ornamental fence, we offer the right fencing solutions at competitive prices ....

Specializing in LAWN AND YARD CARE AND HAULING! We always guarantee your satisfaction and won’t leave until the job is done right. We take pride in ourselves and on the quality work we provide, while always delivering great customer service! Check out our services offered, then call --or-- click to schedule a free estimate today!  …

Went great, they gave us the timeline and stuck to it. No hidden costs incurred, did a very nice job!

Everything went as planned and scheduled. Fence looks great. Fence removed was done neatly and all materials taken away. The people from the company are very nice.

Description of Work
removed and replaced fencing on east side of yard, including a new gate..It was 6 foot cedar (b/b) in included walk in gate.

Thanks, [Member Name Removed]! It was great working with you! If we can do anything for you in the future just let us know.
5.0

We were very pleased with the finished product. The existing gate works much better and easier than in the past and the new gate looks like it has always been in place.

Description of Work
We needed 1) a section of our fence which had sagged repaired, 2) a gate which had shifted repaired and 3) an additional gate installed.

Thank you so much! We are happy to have helped!
5.0

Excellent! Mike was always just an email away and responded to all emails very timely. Work was performed as described as scheduled even thought schedule was changed after house was hit by tornado. Mike was very easy to work with and I recommended him to the new neighbors and now we all have Advantage Fencing. Mike is my fence guy!

Description of Work
Fence for back and side yards

The contract was worrisome to me as it seemed fairly pricey, but I figured between the nice fence and the fact that I had to do a survey that it was likely fair. After all they were the highest rated fencing company on Angies list. They failed to check their emails to get the contract. When talking to the vendor, they said that they would "tie in" to the neighbors fence. To me, this sounded like they would physically attach my fence to the neighbors existing fence, after all, that is why I chose the fencing I did. I thought to myself "perfect". After making sure it was ok to replace the neighbors fences, I made sure to tell the vendor that they should take out the 2 adjoining fences. After all, if they were tying in, then it would make sense to replace the neighbors fence, it would make it look nicer for everyone, and it would make my neighbors happy as they would no longer have to maintain those pieces of fence line. Being the highest rated vendor on Angies List, and bragging about how good of job they do and how careful they were, I opted NOT to get the sprinkler protection, my mistake. So the day finally comes that they install my posts, not only were my neighbors fences NOT replaced, they weren't even tore out, the fence line that I was "tying into" was several inches away from my new posts, leaving a weird offset, and my neighbors ******, because we had all agreed to what I THOUGHT I had made clear. When they came back to finish the fence, after the poles had set, I got a note saying that they "found sprinkler damage". So, the take away... As far as what the the fence construction goes, it was wonderful, beautiful and appears to be a fair price. Everything else? Ability to follow instructions, carefulness, communication, etc... miserable. If you want to hire this company, take the coverage, and make sure there is no wiggle room for confusion.

Description of Work
I had a fence instaled

Really well. Called Advantage Fence and the owner Mike referred me to his repair man ,Brennan who responded immediately and came a day early because he heard the forecast called for rain the day he was going to come out.

So happy to hear that Brennan got you taken care of! Please let us know if there is anything we can do for you in the future.
5.0

They did excellent work, were punctual, and explained everything they would do. Mike made some suggestions that saved us money.

Description of Work
Had a fence to close the back yard.

Thanks, [Member Name Removed]! We appreciate you taking the time to review our work! Please let us know if there'[Member Information Removed] anything we can do for you in the future.
5.0

The owner Mike was great to work with. He was recommended by my mortgage broker and we could not have been happier. We weren't sure what we wanted and sent Mike several photos and design options. He was very patient with us and quickly sent us quotes for multiple styles and heights. When it came time to put the fence in his crew was great. They kept the area clean and and did not hit a single sprinkler line. The fence looks amazing and we could not be happier. Would definitely recommend to anyone.

Mike Paladino came out to look at my yard. I had a somewhat unique problem and he offered a great fencing solution. He was quick to respond with an estimate. He projected when the job would be begun and when it would be completed. I thought perhaps the weather would cause a delay but it didn't. They contacted me several days before they were to be at my house. The work was completed beautifully. I would surely recommend them to anyone!

Put down my 50% deposit in April and was give June as an estimate for starting the project. Communication is the weakness here. In mid-May, I had two guys putting flags to mark utilities, which is how I was informed the timeline was moved up. After I contacted Advantage for clarification, I was given a two-day "window" for post installation. The installers just showed up without a call confirming it was convenient (we have a dog, so it would be nice to know when a fence is coming down!). Posts installed with one not completely backfilled. Left over dirt just dumped under a tree, no one came to the door to ask if that was the most convenient or desirable place. In my communication with Advantage they said the concrete had to "set" and the fence would be built 7-12 days later. So imagine my surprise when after installing posts on Tuesday, and rain Wednesday and Thursday, guys show up Friday evening to install the fence. I went out to check and make sure the concrete wasn't an issue with the rain, and to ask why a post hole hadn't been filled and the "leader" said something about two different concretes, but then cars started pulling up to drop kids off for a party and I had to leave. The workers built the fence and then took off without letting me know or asking me to come out. When I checked the fence the next morning, it looked nice, except the same post hole that wasn't filled. The invoice email was sent and I responded I would gladly pay as soon as that hole was filled. The response back was that the sprinkler system was "nicked" and had I gotten that repaired yet? This was the FIRST I had heard about them cutting the sprinkler line! Apparently the "leader" I spoke with insisted he told me, but that isn't something one is likely to forget, so unless he mumbled as I walked away, he did NOT communicate that. I was leaving for two weeks the following day, so I had to rush and contact the sprinkler service to get the repair done so I could have the system on during my absence. There is a "sprinkler protection" clause in the Advantage contract, which I didn't take, but since that was $160 and my bill from my sprinkler service is 19 cents short of that, it would be a wash. Then their automatic invoice service was sending me threatening emails about paying penalties because my payment was overdue, even though I had let them know I would be out of pocket for two weeks. The fence seems well built, but they left cutoff piece of wood, trampled shrubs, broke light fixtures and left the place a mess. I had tried to move as much as I could out of their way, but it seemed like they picked a small shrub up out of the ground and just chucked it out of the way. Overall, the price was decent but the professionalism was lacking.