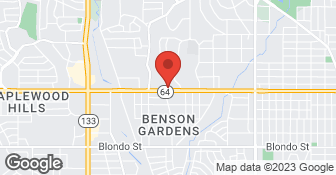 Thrasher services Nebraska, Western Iowa, Central and Western Kansas* and Northeast Missouri, providing foundation repair for settling and wall stabilization, basement waterproofing, concrete lifting and leveling, radon testing & mitigation, crawl space encapsulation, egress window installation and electrical services. At Thrasher, we work every day to challenge the status quo and provide an unparalleled experience for each of our customers. With over 45 years of experience, you can rest easy knowing the Thrasher team is here to serve you, your family and your home. (*Available services may vary.)  …

Pyramid Roofing Inc. is a roofing, siding and window contractor serving residential and commercial customers in the greater Omaha, NE, and Sarpy County area. We specialize in re-roofs, asphalt shingles and cedar shakes on all types of residential and commercial buildings. Since 1993, our employees have delivered quality workmanship resulting in high customer satisfaction. Our professional roofers take pride in their workmanship, and we’ll guarantee it with a 5-year warranty on all labor! Our services include, but are not limited to: • Roofing • Siding • Gutters • Windows • Asbestos removal • Hail damage repairs We also provide excellent services on other installations, such as chimneys, downspouts, drains, fascia, flashing, skylights and soffits. We are licensed and insured, and all work is warranted. We use top brands, including Fraser Cedar, DaVinci Roofscapes, Tamko, CertainTeed, GAF/Elk and Atlas. From additions to warehouses and everything in between, we know roofing. Visit us online to see what our customers say about our work and learn more about our company and our products. So, give us a call and schedule your free estimate today!  …

Flo masters goes above and beyond the standards for any gutter company! We offer replacements, repairs , and gutter cleanings. Our favorite part of being a small local company is that we are personally involved in every project we have, giving you 100% of our attention and commitment!!  …

Always be cautious when you have insurance money in hand. I hired a local company with business cards and everything. ABC confirmed I would have been better off hiring some guys at the bus stop. I plan on hiring them to fix the improperly installed siding.

Description of Work
Confirmed I should have checked angieslist first.

Description of Work
Replacement STEEL gutters, which proved to be very difficult to find in Omaha. Most installers wanted to put in the flimsier aluminum gutters, or the very expensive L*Guard type.

The old original windows had iron frames, with wood-framed storms. The old iron frames had surface rust, and the old wood storm frames had all rotted. I wanted my new windows to have strong frames that resist warping or rotting. I think 100% composite-frame windows (the only kind ABC sells) were the right choice. They cost about $500 each installed - not cheap - but I have no regrets. The installers were prompt, professional, and fast. I had to do a lot of exterior caulking (as recommended by ABC Seamless), and a little painting, after the installation which was no big deal given the relatively small number and size of the four windows, and given how easy they were for me to access. However, with our many other double-hung windows, I would not want to have so much finishing work to do myself! With these hopper style of windows, while the immovable (outer) frame is perfectly straight and square, the sash (which tilts inwards from the top) is not perfectly straight/square in three of the four windows (only one of the four looks perfectly aligned when closed shut). The old original hopper windows likewise were not perfectly straight, but with their design, slight misalignment wasn't visible. ABC Seamless told me my new hopper windows could not be adjusted. So, I just put some weatherstrip foam in the gaps. Both functionally and visually they're fine. Again, no big deal. I just wanted to explain why some of my ratings are B rather than A. I would use ABC Seamless again for basement hoppers because I know of no better option for such window application here in Omaha. I'm still looking for the best option for the rest of the windows (all double-hung) in the house.

Perfect. The downspout was much much higher quality than anything from Home Depot or Menards. The prepainted surface did not chip or scrape and matched our house color. Thicker steel than anything from a home improvement store sells will hold up. Many many more colors to choose from. Fit like a glove.

They were awesome. What was most impressive about them was our entry way had some problems with rotted wood and they were able to rebuild the whole thing and get it solid, they took their time. It does take them a while to call you back and to do everything but is very precise and accurate. It is worth the wait, you just have to be patient with them. When ever they made an appointment they came on time. We now have an appointment scheduled for an estimate gutter replacement.

Description of Work
I used Abc Seamless for window and door replacement service. They replaced a kitchen window, a ceiling to floor dining room window, a storm door, main door and side light.

Excellent. When finished, it was as it was nearly impossible to tell the door was replaced, other than by the fact it was new. No need to paint around the trim or any other touch-up was required.

They are a very good company. I would definitely use their services again in the future.

Description of Work
I used ABC Seamless. I just signed up with him to install a seamless gutter on the side of my mobile home. That would include the cover and the downspout.

We didn't choose him, but he was impressive. There were two companies we were considering, and we chose the other one. He was reasonable, and he seemed really good. The two companies were pretty much the same on the price. They seemed to respond well, and they understood the job. They seemed legitimate and truthful.

Description of Work
They gave an estimate for installing windows.

There was only a slight bit of damages with my gutters but all and all, they did a great job. They were able to get the gutters back to normal and that is all that really matters. I thought the men who came out were very nice and I enjoyed the service I received.

Description of Work
ABC repaired the gutters I have on my 6100 square foot home.

I felt that ABC Seamless did a wonderful job. They were persistent in their work. They were respectful and got the job done in a good amount of time. They guaranteed their work but of course we have had no problems and have referred them to others as well.

Description of Work
They installed siding, soffit and fascia, and did some work around our windows.