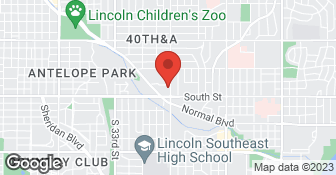 Thrasher services Nebraska, Western Iowa, Central and Western Kansas* and Northeast Missouri, providing foundation repair for settling and wall stabilization, basement waterproofing, concrete lifting and leveling, radon testing & mitigation, crawl space encapsulation, egress window installation and electrical services. At Thrasher, we work every day to challenge the status quo and provide an unparalleled experience for each of our customers. With over 45 years of experience, you can rest easy knowing the Thrasher team is here to serve you, your family and your home. (*Available services may vary.)  …

At Home Pride Contractors we strive to exceed our customer’s perception of what quality workmanship is all about. Our success is a result of paying attention to detail and performing at a high level for a fair price. We are a family owned and operated business with years of experience in the home improvement industry with specializations in roofing, siding, windows and gutters. Home Pride has built our reputation around the highest quality of professional service, products and craftsmanship. We look forward to the opportunity to help your dreams become a reality. Home Pride proudly serves the greater Omaha area as well as most of eastern Nebraska and western Iowa.  …

Based out of Lincoln, Nebraska, SENDD Contracting is an insured, licensed, and State-registered contractor with a 25-year history in general contracting, project management, and exterior improvement. To date, we have successfully managed over 1,200 residential and commercial construction projects. Our primary specialties are in roofing, gutter, window, and siding installation, although staff have diversified talents in various home inspection techniques. Outside of general contracting services, we also offer lead-based paint testing and Housing Quality Standards (HQS) inspections. All of SENDD Contracting’s staff have earned the following certifications: • Certified Lead Inspectors/Risk Assessors by the State of Nebraska • Certified HQS Inspectors through Nan McKay & Associates • Certified Residential Roof Inspectors through HAAG Engineering The primary goal of SENDD Contracting is to meet our customers’ construction needs through quality workmanship, while building and maintaining valued, meaningful and successful relationships. We are proud to offer our services to the entire southeastern Nebraska region, including the Lincoln and Omaha metro areas. Our team is responsive, reliable, and ready to help you bring your projects to life!  …

I was very disappointed in my experience with Stonebrook Roofing. I originally contacted them about looking at some storm damage, with the intention of having them repair any damage and then price out a full roof replacement. I went round and round for months trying to get an estimate and kept getting the brush off. I would call the individual I was working with to ask if he'd had a chance to look at the roof to get me an estimate and I'd get a response about how busy he was, but a promise that'd he'd get over to look at it tomorrow. The next day would come and go with no response. This went on for a couple of months. I finally gave up on the guy I was working with and called the main office where I was able to speak to someone else. They finally did get somebody out to the house to look at the damage I needed repaired and said they would get somebody out there to take care of it. They only made half the repairs and sent me a bill for all the repairs. I called and asked if they planned on finishing the job and was told they would send somebody out right away. A couple of weeks go by and the job still wasn't finished. I finally called and asked them to update the bill I had received for half the job (I was willing to pay for the work they did do) and informed them that I would no longer need their services. A Stonebrook employee called me back and in a very confrontational tone told me that they couldn't believe I wasn't giving them a chance to do the job. I gave them almost six months to get the job done right and they never delivered. The lack of customer service and responsiveness was very disappointing and I would not recommend using Stonebrook for your roofing needs.

We had extensive hail damage from the spring 2016 storm. We hired Stonebrook again, why I am not sure, to put on a new roof. The first time they did the roof they did not seal a roof pipe and it leaked in my bathroom ceiling and we had to pay for the ceiling to be repainted. This time around they were quick to collect checks but never get the work done. There was no communication when my roof and gutters were going to be redone. I finally got to schedule the roof replacement and they came days later, destroyed my yard (neighbors complained about the trash everywhere), and there was damage to my house. The gutter guys just showed up one day, without any call they were coming, and started taking off the gutters. We had asked them to fix some of the soffits and fascias before putting new gutters on. That was ignored and new gutters were thrown on. Again, no clean up effort was done. Instead of mailing invoices, I got tracked down and asked to hand over checks immediately so the sales guy could get his commissions paid. Instead of being polite about it I was told, "you got your insurance money so you need to pay the invoice." Not sure what business it was of his whether or not I got insurance money or how much. I made the huge mistake of showing him the insurance estimate. Never will I do that again. Any time I wanted to discuss the problems we were having I kept having to deal with the salesman and not his supervisor, even though I asked never to deal with him again.

Description of Work
New roof and gutters due to hail storm.

Stonebrook Roofing was very professional and completed our roof to our expectations. We would use them again.

All the workers were professional and completed work on time. Very helpful in the selection process. Would use again.

Work was satisfactory, it met expectations. However they were very sloppy. Crew did not clean up daily as promised. Left nails and debris in driveway, yard, bushes. Damaged plants, screen, and concrete. There was no supervision of the delivery of shingles. I had to supervise the delivery and placement of the new shingles, a skill that I was not briefed on nor experienced at. Stonebrook did not take care to protect my house, shrubs and property from damage while they worked on my roof. I had specifically asked that they do so prior to signing the contract. Stonebrook rep. promised to take precautions which was not the case. There was no supervision of the waste removal contractor. The company that removed the waste shingles/dumpster damaged my driveway and side walk. The damaged amounted to over $3,000. When I informed the Stonebrook representative of the damage he gave me the contacts of the waste removal sub-contractor and suggested that I should recoup damages myself from the dumpster supplier. This was the final blow to any confidence I might have had in Stonebrook. It was a drama to finally get Stonebrook to pay for the damage. In summary, the price was competitive, they finished in the time frame promised and the work was acceptable. I had an independent inspector exam the work and found the job was done satisfactorily. But ,over all Stonebrook was sloppy and unprofessional with regard to damage to my property while they were working on my roof. I cannot recommend this firm because of their sloppy and unprofessional job site practices.

The work was done as promised and for the most part they did a good job. Had to make a return visit to fix a few minor issues but was more then willing to fix it. The cost was high but we chose a class 4 single that are more expensive then most.

Description of Work
We had our roof replaced with a class 4 architectural shingle.

I provided material and Stonebrook did roofing. They claimed platinum certified for owen corning. The crew came in and seem to be from another sub contractor. They did good work but took short cuts . No one was there to supervise. Like they cut ice and water shield and did not overlap. I am not sure if they are the best but certainly better than lot of local folks. Cost vs value - Six nails, timely and punctual, but took some short cuts during installation. Ridge cap was installed with nails opposite the wind direction. Not good. I called them and the crew will be here to fix. Sorry! I wish I could give A.

Description of Work
Got my roof done.

Only got estimate---decided to postpone project

They gave me a quote and I did not end up going with them. It went really good. It was professional and straightforward. I would consider them again.

Description of Work
Stonebrook Roofing Incorporated did give me a quote.

Description of Work
this provider came to give me an estimate for removal of a solar panel and repair the roof. I received a call 2 days later to tell my they had to "draw" up plans before they could get a permit. With that being said I had to decline the services.