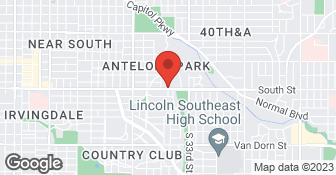 Award winning. Serving Lincoln and the surrounding communities since 1979. We service all makes and models of heating and cooling equipment and offer 24 hour service. Financing and senior discounts are available. Free estimates on replacement systems. NATE certified technicians....

We offer electrical services for residential and commercial customers. Our services range from new installs, remodel work, to troubleshooting any electrical issues you may have. With 20 plus years of electrical industry experience my goal is to provide a quality service at a reasonable price to our customers. We look forward to helping you out with all your electrical needs!  …

New unit was installed using the 50 year old lines that were there. Watch them. You need to know about your system to a good level as they will take advantage of your not knowing and cut corners. Yes they will now replace the lines for another charge. Not best practice to used old lines on a new system.

They've put in a new air conditioner and a new furnace and repaired the furnace in our new house as well. We've had good experience with them.

Description of Work
This was for a new computer panel for the HVAC system.

I called on a Monday, got a big on a Tuesday, and the work was done (and done well) on that same Friday. The price was exactly as quoted. Capitol had done good work for me in a previous home, and I will continue to do business with them in the future.

Description of Work
I needed some supplies and returns added in my basement, as well as some rough ins done for future bathroom finish.

This was a terrible experience. First off, I was given and 4 1/2 hour window of when the tech was to arrive. I expressed concern over this because I had appointments. I was promised a call prior to the service tech arriving, but the tech did not call. Then, when he arrived I had someone holding my dog that likes to jump on people. The tech then spent one to two minutes arguing with me about wether or not my dog would bite him. He did not introduce himself at all. His unprofessional behavior did not stop there. He stomped around the house, not explaining what he was doing or what he needed. He then used my back spigot, which had he notified me he needed to use it, I would have asked him not to. Instead, he proceeded to blame me because, "no one told him." I'm sorry, but you can't be told something I have no knowledge you need to be told. Shortly after that, he opened the door and said something I couldn't hear. I got up and saw him leaving, so had to chase outside to ask him what the charge would be. He answer was he didn't know, but he didn't use any parts, so it should be just paying for his time. I called right after he left, I called to file a complaint. I was asked to call the next day to speak to the day staff. The next morning, I received a call from someone named Chris, who said they'd spoken to the tech and he was just nervous about my dog, the tech only came into contact with my dog when he first arrived. I then related the whole story to him and he replied with, "sorry, I guess I'll talk to him." Today, I received a bill for the service call and labor, which I expected, but was also billed for a changed filter (fine) and an "upgraded" filter. The upgraded filter was the change once a year type and I had just changed it a couple months ago. I have no idea why it needed to be upgraded, I did not give permission for it to be upgraded. Also, I was told by the tech NO parts were used. Needless to say, from now on, I'll be using a different company.

I called around 0800 this morning and asked for an appointment to get my a/c checked. I was informed that they had no appointments at all to provide to me. No Service was performed and no dates were given as alternate appointments. I was surprised and shocked because I had never heard a company turn down an offer to perform services. In addition, the phone number listed is incorrect. I kept getting a busy signal. I had to track the number down through the phone book.

Description of Work
I contacted the company for an appointment to get my a/c check. I was told they had no appointments at all. None next week or at all. I find that very disturbing that a company would have no appointment at all and will not contact them again for anything since they have "no appointments".

They did a fine job. We have never had a problem with them. They do exactly what they will say they will do. They are prompt and if they have a problem, they talk to you. I trust them.

The repairman came to the house on time and as promised. He analyzed the problem. We needed a new part. This furnace is 10+ years old so I was happy it was a part and not a full replacement. (The other furnace--same age--has already been replaced.) The repairman had to order the part, or locate it in a warehouse, which he did. He returned to install it and also checked out the other working parts, oiled as necessary, etc. He said we should be good for another 10 years or so. (Let's hope!) He cleaned up after his work was complete, cleaned some interior parts of the furnace which I didn't expect and was gone in about an hour. The furnace has worked as it should since his repairs. I appreciated that he showed me the faulty part; that he explained everything as he went along; and showed me what he would do once the part had arrived. He gave us some advice about furnace maintenance to insure future use. We have since installed a dehumidifier and although we change the filters regularly, we are more diligent about that as well. I would definitely use this company again. Our furnaces are an off-brand so I appreciate that Capitol Heating and Air can work on all makes and models.

Description of Work
Analyzed a problem with one of our furnaces. It was making a funny noise and I was concerned that it would quit suddenly.

Had a system check conducted on system and according to the technician all systems checked out fine. Approx a week later our hvac system kept shuttling down. Several different techs were sent and several parts were replaced but nobody seemed to know how the system actually worked. They were just guessing, throwing parts at the problem. Turned out to be a VERY simple issue that should have been noticed when the preventative maintenance call was originally done! The worst part was they then sent an invoice for all the replaced parts that were not ever needed. In the end they did forgive part of the charges but no apology was given and it was only under protest.

They provide excellent service and are very nice. They come out and do their work efficiently. They're always very polite, too. I called them to come back out after I thought it was not working properly. It turns out that I just didn't know how to use the new programmable thermostat. They came back (free of charge!) and showed me how to use it.

Description of Work
Capitol Heating & Air Conditioning installed a new furnace for us.

They provide excellent service and are very nice. They come out and do their work efficiently. In fact, I hardly knew they'd been in and out when they did the bathroom fan. They're always very polite, too.

Description of Work
Capitol Heating & Air Conditioning was called in to vent our bathroom fan through the attic for a bathroom remodel.