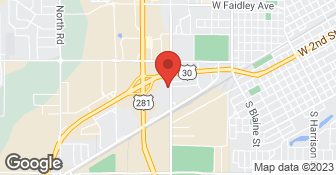 Welcome to Randy's Sprinkler Systems, a locally owned and operated lawn sprinkler business located in Grand Island, Ne serving Grand Island, Hastings and the surrounding communities for over 20 years. We pride ourselves on our friendly, courteous and professional staff with a total of 60+ years combined industry experience. At Randy’s Sprinkler Systems, we make your life a little easier. With a sprinkler system from Randy’s, you can spend more time on the things that matter and less time worrying about your lawn. A sprinkler system from Randy’s can eliminate the hassle of dragging around hoses and cheap sprinklers that spray more on the sidewalk and driveway then they do on the lawn. Your sprinkler system will be custom designed for your lawn. A properly designed and installed irrigation system can save money in utility bills and help lower a home’s water usage making it friendlier for the environment too! Services Provided: *Residential - Commercial * Design * Layout * Installation * Service - Repair * Water Features * Ponds - Pond Supplies *Certified Backflow Testing *Spring Clean-up of Ponds *Small Landscape Projects & Sodding *Drain Irrigation Pipes (Winterization) Listen to your lawn! Not everyone has the time to give their lawn the attention it needs, that is where Randy’s Sprinkler Systems makes your life a little easier. Call us for a Free installation quote, consultation and service today!...

We have a general contractor who is attempting to work with Randy's Sprinklers to remove sprinkler heads in the way of the garage and driveway and map where new lines will need to run. Both the garage and driveway have been flagged for 3 weeks, sod have even been removed. Randy's sent out an employee on two occasions. The first time it was raining and he met with our general contractor who explained what needed to be done, then left not doing anything. The second time he mapped the garage and driveway, but didn't remove the sprinkler heads as requested. In two days concrete will be poured for the garage floor, yet Randy's' hasn't removed the sprinkler heads. I spoke with the general contractor today who expressed frustration about having contacted Randy's multiple times and is still unable to get them to do what is being asked. I phone Randy's today at the general contractor's request. The secretary who answered said, "Well, they've been out there twice." To which I responded, "Yes, but haven't done what has been asked." She transferred me to Randy himself, who said he was waiting for our general contractor to let him know when everything has been marked. I explained to him, it all has been marked for 3 weeks. His attitude was so short and rude, I asked him if it was a problem to do as I was asking. He's sending someone out today to remove the sprinkler heads. I phoned the general contractor to explain what I had been told by Randy. From my perspective, Randy or an employee is covering up their lack of response to the general contractors requests. Unfortunately, we have already paid for their annual program which helps to cover parts and labor. Unless we see a change in professionalism and responsiveness, we won't use them in the future.

Description of Work
Randy's Sprinklers put in our original system in June, 2002. We have used them ever since for spring start up, repairs, and fall shut down with no issues. We have begun building a double car garage with a curved driveway, which will require moving several sprinklers and re-routing lines. We now have an issue.