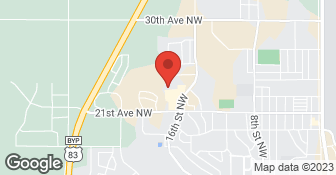 Absolute Comfort gave me the quote after viewing the place and did not respond to questions afterward via phone call or email relpies I sent through the estimate email they sent me. They will only install models they fot a deal on to increase their profits not one that the customer wants. This place is very unprofessional and I can't imagine what it'd be like to get them to service their own equipment further down the road. Safe yourself the hassle and find someone else.

The heat exchanger in my Lennox furnace was corroded through. It was under warranty and parts covered. Lennox sends a box that includes not only the heat exchanger but burners as well as some additional items. Absolute comfort was to install the replacement parts plus labor. As a retired Missile Technician for the government, I had no issues with removing the old heat exchanger and installing the parts myself. That said Lennox wants a certified dealer to do the work. I did the removal. When Absolute comfort arrived the service Tech did not bring in the entire box of parts into my home, only the heat exchanger. When I asked for the rest of the parts, he stated this is all you get. I said no, I k now what is included and there are burners, etc. missing. He was adamant this was all I was going to get and became angry. I made a phone call to Lennox service center in MN. Indeed he was dishonest and yes, There were additional parts included in the kit. They phoned Absolute comfort. I have no idea what was said, but the next day the service tech was back at my house installing the additional parts. He said they were in the bottom of the box and he didn't see them. How do you not see parts the size of a bread box? I made no argument with him and allowed him to complete the job as required, but never again will I do business with Absolute comfort.

Prior service call replaced thermacouple. Few days later, furnace did not respond to restart, almost a little explosion. They came out the next day and replaced the entire furnace. And will be back in the spring to install the A.C.

When they came to my home to give an est. the owner was very nice. He answered all my question. So I set the date for them to come do the job. First they showed up two hours late. Then they started the job and forgot to bring the gas line with them. so theydid what they could do. Then when they finished all they could do the worker came in to tell me he would come back. We asked when and he told use it depends on the schedule of the jobs for the next day. So I asked if I should call there boss and work out a time and he told me very rudely he was going to call and tell me when they would come back. Not ask us when it would work for us. He was very rude. So when he left I called the boss and tried to talk to him about his guys ruddiness and forgetting the parts to do the job. He got very defensive and started arguing with me. Nothing good came from the conversation. The next day the finished the job and turned the gas on and left. I went to the garage an hour later and the gas smell hit me. They forgot to tighten down the gas line to the heater. I guess its a story of you get what you pay for.

Description of Work
I installed a heater in my garage. I needed a gas hook to it. So called absolute to run the gas line from my gas meter to the heater in the garage.

My 10 year old Lennox high efficiency propane furnace had a failed heat exchanger. I found this myself when wife complained of propane smell. it had rusted through. I had purchased this high end furnace from my brother in law in the red river valley years earlier. He is a major Lennox dealer. I phoned him and was pleased to learn it was still under warranty, but that warranty did not cover labor and parts must be installed by a certified dealer. In the mean time I had to set up electric heaters, as the warranty parts were shipped from Minneapolis MN and it was late winter 2010. The local Minot Lennox dealer Absolute Comfort was hired to order the warranty parts and install them. He arrived a week later, but did not bring in the box with all the warranty parts included into my house. He carried in the heat exchanger only, unpackaged. I asked, "where are all the rest of the parts?" "This is all you get," he said, looking rather perturbed. I said "no that's not true". "I also receive new burners, burner box, hot surface igniter, etc." (NO!) he said. (This is it!) He installed the heat exchanger and left me with a bill which did take into account that I had already disassembled the furnace. As a retired USAF ICBM missile & B52 bomber repair technician, I found the furnace disassembly not a challenging issue at all. I phoned my brother in law in the red river valley and explained what had happened & was quickly informed exactly the parts in the box I should have received, because they had done this repair several times. He made A phone call to the Lennox District offices in Minneapolis. The next day Absolute Comfort called me back and said he had found those parts in the bottom of the box. Likely story! He came was very quiet and sheepishly installed all the warranty parts sent by Lennox for the repair. Then told me he never intended to cheat me, but he had missed seeing the parts in the box. burners and burner box are the size of a small bread box. How could you miss that. Some months later, a 92 year old lady friend of mine was bilked out of thousands of dollars by a heating contractor from Minot not fixing her problem, even billing her for time he was not in her home. I asked who would do this to you. She said Mr. so & so the young guy from Absolute Comfort. I told her what happened to me & learned he had been milking her for thousand s for several months. Get rid of him now I said, and as her out of state children said. I will call Connole-Sommerville to get you legitimate & honest service. She did tell Absolute not to return. Was happy with the other contractor.

Description of Work
The service guy from Absolute Comfort attempted to cheat me and was caught!

They were fast and efficient. They had to order the part because its an older stove, but they had it in a few days, and came out and fixed it for us. They charge a small monthly fee which gives access to 24/7 appliance/heating & a/c repair should anything go wrong.

Description of Work
They fixed the burner on my stove.