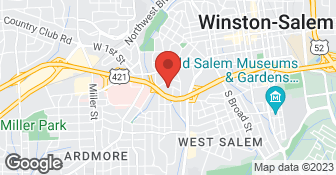 Terribly wrong. Believe it or not, this Sonny Newcomer, damaged my fridge by purpose because I did not accept the terms of his offer. I've got a side-by-side refrigerator. The freezer was working fine but the refrigerator side was not taking any cold. He gave me a budget of 400$ to perform the repair next day but soon, after a little on line research, I considered that crazy expensive so, I called him and cancelled the job. He told me that still I had to pay for a relay he changed during the diagnosis visit, asking a huge price for it. I refused it because he did not ask or inform me of the price before changing it, so he decided to take his relay back. I made the mistake of letting him work on my fridge after that disappointment. He was supposed to take his relay and place the old one back, so the fridge would be as it was before his visit. However, it was not. As soon as he left my house, without even saying good bye, the freezer started to get warm and now the whole unit is not working at all. It looks like if the gas has been released so, the compressor is running but not making any cold. So, after his visit, I have a bigger issue than I had before. He took 80$ and let the fridge in a worse condition, which is unbelievable. This guy has issues and attitude problems. It was obvious even talking to him by phone but he was the only one available to come home in the same day. Now, I understand why he was so available. I am more than disappointed. I am concern. What he did goes beyond of being unprofessional, still there is nothing much I can do about it but hire a real prof. and warn to others.

My experience was pretty poor. It was through our home warranty. We didn't get to choose it. It was just what was given to us. Even this year we were having a little issue, our home warranty said to contact them. To date, they've actually never bothered to call us. It's the worst experience I've ever had. They had to come back three or four times. It was awful. When they did show, they showed up on time. I would never use them in the future. They should return the phone calls and actually book the appointment. Terrible staff answered the phone. I had a terrible runaround when trying to rebook the appointment. This year when we tried to use them, they actually never returned the call or e-mail or even try to contact us to make appointments.

Description of Work
I used A1 for heating and air conditioning.

I would not call this a slick operation, straight mom and pop, but they did a good job and the system works nicely. He followed up to make sure I was happy and came back to adjust fan speeds at my request. I am a do-it-yourselfer and wanted an inexpensive system installed which was a bit beyond my experience (and time lately). This was the perfect solution for me. I am happy with the job, especially for the price.

Description of Work
A1 Appliances installed a heat pump and ductwork in my small house. After getting quotes from several big firms this one came in much lower. I seldom go with the low bidder, but Sonny clearly had many years experience, explained what he would do, and I decided to take a chance.

My refrigerator wasn't working properly so I contacted my home warranty company who then called A-1 with whom they have a contract. A repairman came to the house and determined a flap on my built-in icemaker wasn't properly closed, thus, allowing warm air into the freezer. I should have questioned his expertise when I approached his damaged van and noticed the messy interior. He assumed the problem was fixed but the ice machine stopped working so another call was made and after considerable delay and several calls later, he returned and replaced a part which still didn't correct the problem. In fact, after his third service call I realized the refrigerator was functioning worse and perishable items were spoiling. At this moment I realized I had to call a reputable repair shop so the problem could be accurately diagnosed.

Description of Work
Ice was forming in the bottom of my freezer and the repairman determined a flap on the icemaker was partially open. He recharged the system and unit but the icemaker was still not working and the overall temp in both the freezer and refrigerator were lower.

At Empire Heating and Air, we specialize in all of your heating and cooling services and/or repairs, along with gas lines and heating oil! We take pride in every service we do, where we go the extra mile to assure you get the proper service! Empire offers an affordable service call, great service contracts, and friendly service! Check out our services offered and call or click to schedule a free estimate today!  …

Insured
All statements concerning insurance, licenses, and bonds are informational only, and are self-reported. Since insurance, licenses and bonds can expire and can be cancelled, homeowners should always check such information for themselves.To find more licensing information for your state, visit our Find Licensing Requirements page.
General Information
Free Estimates
Ask for details
Eco-Friendly Accreditations
No
Payment Options
Check
Senior Discount
10%
Emergency Service
Yes
Warranties
Yes

How is A-1 Appliance Service overall rated?

A-1 Appliance Service is currently rated 2 overall out of 5.

What days are A-1 Appliance Service open?

A-1 Appliance Service is open:

What payment options does A-1 Appliance Service provide

A-1 Appliance Service accepts the following forms of payment: Check

No, A-1 Appliance Service does not offer free project estimates.

No, A-1 Appliance Service does not offer eco-friendly accreditations.

Does A-1 Appliance Service offer a senior discount?

No, A-1 Appliance Service does not offer a senior discount.

Are warranties offered by A-1 Appliance Service?

What services does A-1 Appliance Service offer?

Are there any services A-1 Appliance Service does not offer?