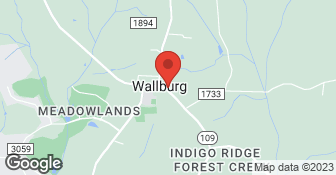 FULL GUTTER SERVICE anything from repairs, cleaning, guards , and installs. don't keep looking at those nasty gutters, call Colby today for set up time. www.colbymortonshomerepair.com offering good prices and fully insured. -no mess left behind- Find us on Facebook and Instagram Facebook is Www.facebook.com/colbymortonroofing...

Absolutely awful. After showing up with samples, both of the contacts I had for this company simply ignored me...no returned calls for over a week and some line on nonsense about weather affecting their phones when they finally did return my fifth telephone message. This was the second contractor I had to fire in a week...starting to wonder what it actually takes to get on Angie's list; apparently not much.

I called Colby's Home Repairs when one of my skylights started leaking! He was able to come out the very next day and look at it. Colby was extremely professional and took great care to ensure my skylight would be leak free. I will definitely be using his services again in the future! Make sure to check him out if you're in the Winston-Salem area.

I had an issue with a leak from my window, and had trouble with getting someone out to look that day since I have a young baby in the home. I called and they came that day. They checked to make sure there was no structural issues, and were able to identify the issue with the siding and the need to reseal the windows. After the weather cleared up, we scheduled an appointment and they came and completed the job in no time, and resealed the area around the windows that was leaking. I was grateful for their service!

Hello [Member Name Removed], Thank you for the great review. Please keep us in mind if you need our assistance again. Colby Morton & Team
1.0

I guess I wasn’t worth their time

Hello [Member Name Removed], We do apologize for the inconvenience. If you would give us another chance in the future we would like to gain your business.
1.0

I was called by someone who told me a company would call me to arrange an estimate. I was later called by another person who more or less told me the same thing. Both said the company was out of Charlotte, NC, as that company dealt with buildings and apartment complexes; commercial facilities. No one else ever called, so I can't really complete your survey. I still need estimates and would like to proceed with the work, but can't do that unless I get someone out here. Thanks. Linda Idol

Description of Work
Install gutter guards on two buildings in my condo complex.

Hello [Member Name Removed], We do apologize for the inconvenience. If you would give us another chance in the future we would like to gain your business. Thanks, Colby & Team
1.0

Colby seems like a nice guy and may do a good job but when you promise to send out the quote that same day and 3 weeks later have yet to hear from him then he is not someone I would want to use.

Hello [Member Name Removed], We do apologize for the inconvenience. If you would give us another chance in the future we would like to gain your business. Thanks, Colby & Team
2.0

Description of Work
A new roof, and then a repair on that new roof 5 months later when it leaked.

Hello [Member Name Removed], We do apologize for the inconvenience. If you would give us another chance in the future we would like to gain your business. Thanks, Colby & Team
5.0

They could have been more punctual.

We needed some insurance work done on our roof and Colby was recommended. He had done some work for our son. Of all the others who came to do an estimate, Colby did the most comprehensive review and actually went up and took detailed pictures of what was wrong and what needed to be done. Absolutely courteous throughout, he explained how he would do it and everything. On the day they started, his crew arrived on time, and immediately went to work. They went over everything and when done, they left no trace that they ever were here. No trash, no junk shingles, just a clean, professional job. We are really, really pleased with Colby and his entire team. I would recommend Colby's for any work you need on your home as we will have him do a lot more for us. Our family is happy and you will be, too. Thanks Colby! Ibrahim

Called and got serviced same day-the workers were professional, honest and friendly. service was $50 less than quoted over the phone-plus they took all the debris with them. Will definitely use them in the future!

Description of Work
There were a few issues in communication as they had lost a worker, and had to call me several times. The work was done well, on time, and at a reasonable cost.

I have to say he performed a excellent service and the guttering looks great. I would recommend him above anyone I have ever used.

Description of Work
He performed by putting on a section of gutter on my roof. I must say he went beyond his pledge several weeks ago during the ice storm when my gutters was leaking into the inside of my garage. He said he would try to get to me during the breaks in between an he did do this at 8pm at night in the dark on my roof to give me a temporary fix until he could solve the problem.

Colby and his employees were extremely professional in work, in appearance, and in speaking with me on business and on everyday conversation, I certainly would recommend his company for all your construction needs. Great to meet him and great working with him.

Description of Work
Colby himself another employee came to my home and replaced 36' of seamless guttering along with two downspouts, he also had a product which I had never seen as I ask for gutter guards. I told him up front I did nit want the screen gutter guards because in my opinion they are more work than being without guards at all. He had a guard that was screwed down to my gutters and a 5 mph wind was supposed to blow the leaves off. I live in the foot hills Danbury and my house is a part of Hanging Rock MTN so I will up date this review in the fall of the year as my house is basically in the woods, it appeared that the gutter guards would be perfect and much less than those advertised on TV.

Description of Work
I had a terrible experience with this company trying to get gutters cleaned. First they didn't show up for the first four times and they never called to say they were not coming until a day or two after the appintment. Then over a month later they set up an appointment at 12. Called around 2 to say they were on their way. They showed up at 3:50. They were here around 30 min and most of gutters still had debris in them. I called and was told they would not come back out. Colby was nice about it and said we didn't have to pay but they could not come back out.

Description of Work
Repaired a 12 foot section of damaged gutter and cleaned my roof and gutters.

We had several companies give us an estimate on replacing the roof on our garage/workshop and we chose Colby's Home Repairs-Gutter guard & roofing and we are very pleased we did. They were all close on the price, but we chose Colby for his knowledge, professionalism and he was so easy to talk with. We called Colby and he was able to come out the same day to give us an estimate. When he arrived we were shocked at how young he was, but he was extremely knowledgeable and easy to talk with. We discussed what we would like to have done and came to an amicable agreement. He set a date for the next week. He called on Monday to confirm the date for the new roof. On the agreed upon date his crew showed up to begin the work when we noticed there were some small additional areas that needed to be addressed. Colby came to the site and we discussed the additional work and again came to an agreement for the additional work. All the work was completed that day and we were extremely satisfied with the quality of the work. The entire area was cleaned when the crew left . He called later that evening to make sure we were satisfied with the work that was done and to make sure there were no issues. We were extremely pleased with our experience and will definitely use him again.

Description of Work
Colby replaced the roof on our garage and workshop.

Dry Pro Foundation and Crawlspace Specialists, founded in 1999, is a subsidiary of Groundworks, a family of companies that offers superior, proven solutions for your foundation repair, structural repair, crawl space encapsulation, dehumidification, and concrete leveling needs. They are a full-service company specializing in residential and commercial foundation repair, waterproofing and concrete repair solutions in the greater Charlotte, North Carolina area and parts of South Carolina. Dry Pro is a recognized accredited member of the Better Business Bureau and devotes its years of experience, industry knowledge and specialized training to help customers protect their homes or commercial buildings from water damage, concrete sinking, and foundation failure.  …

New local business owner, looking to serve you in your projects and show you the potential of how we can grow with you. 5+ years of experience and continuing with your help we are much appreciated for your business, no job to big no job to small.  …

No, Colby's Home Repairs Gutters & Roofing does not offer a senior discount.

No, Colby's Home Repairs Gutters & Roofing does not offer warranties.

Are there any services Colby's Home Repairs Gutters & Roofing does not offer?